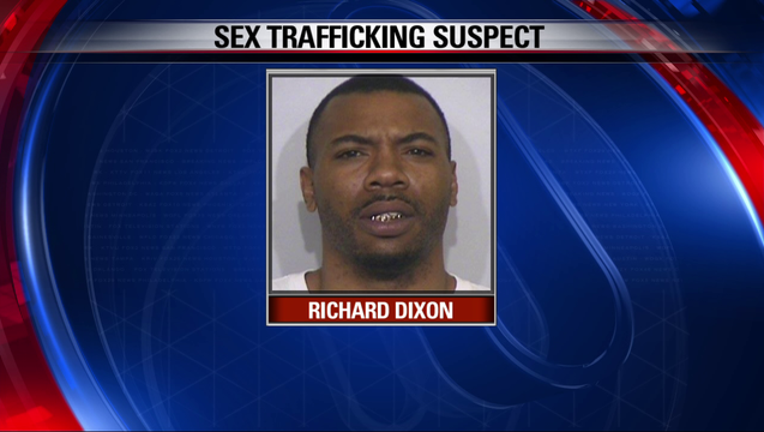 IRVING, Texas - Irving police arrested a man accused of compelling a 15-year-old runaway teen from Irving into prostitution and forcing her to have sex with over 20 men.

Richard Lee Dixon, 35, was arrested by Irving PD on Wednesday and charged with trafficking a child and compelling prostitution.

Police say the 15-year-old runaway met Dixon in the Pleasant Grove area in early November after she was reported missing on Oct. 23.

According to the arrest warrant, Dixon enticed the young girl into prostitution and rented two motel rooms at Studio 6 Dallas for the commercial sex acts. Dixon introduced the teen to “Yvette,” who was responsible for training the runaway in the prostitution business and managing phone calls from clients.

Dixon took several nude photos of the teen and “Yvette” posing together and placed sexual ads for them on backpage.com, accord to the warrant.

Police say Dixon forced the runaway to have sex with over 20 men and physically abused her on several occasions. The warrant says Dixon punched the teen in the face for not making enough money and branded her by burning her on the shoulder and buttocks with a lit cigarette.

The girl was able to escape form Dixon and was later found by Dallas police on November 9. She was found bruised, without shoes and had the same clothes on that she was wearing in the online ad.

Dixon remains in the Irving Jail on a $250,000 bond. Police believe he had other victims and are asking them to come forward. Anyone with information is urged to contact Irving PD at (972) 273-1010.