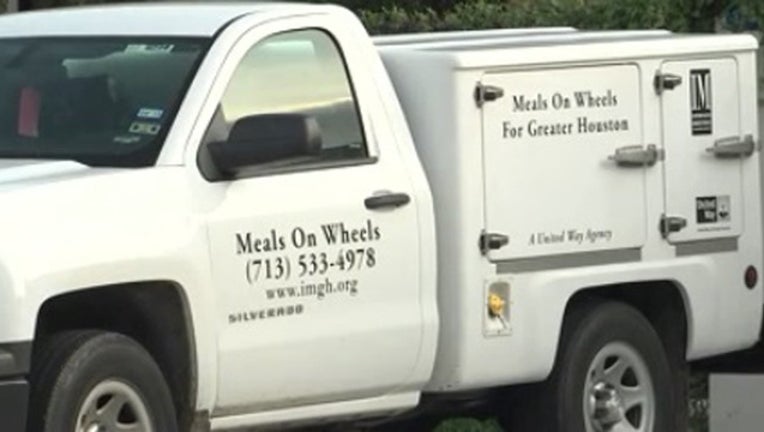 HOUSTON (FOX 26) - A Meals on Wheels driver was robbed at gunpoint this morning while delivering meals to homebound senior citizens living in North Houston.

The driver was not physically hurt in the robbery, but his car was stolen as were more than 50 meals destined for Meals on Wheels seniors.

The director of the Interfaith Ministries Meals on Wheels program in Houston tells FOX 26 News that a driver was threatened and robbed as he tried to deliver food to elderly citizens at a north Houston apartment complex.

Program director Warren Wenner says the robbery took place at the complex for elderly residents on Airline Drive near the North Freeway.

Wenner says the driver was in the breezeway of the complex when a man carrying a gun on demanded that the driver lead him to the delivery vehicle. After the driver started the car and shifted it in reverse, the robber told the driver to get out of the vehicle and lay down on the ground.

The robber drove away in the car which had more than 50 meals that were scheduled to be delivered to elderly residents.

The Meals on Wheels driver, who was not hurt, is also a senior citizen and has delivered food to elderly homebound residents for more than 12 years.

“We are very relieved that he wasn’t hurt and we are doing all we can to help him at this time,” says Wenner. “It’s sad that someone who is helping others would have his life threatened and his car stolen.” He adds that the IM staff is seeking to find the elderly residents who did not receive their designated meals and making arrangements for them to get those meals, valued at approximately $300.

IM Meals on Wheels is working with the Houston Police Department to find the driver's car and encourages anyone to donate money to help defray the cost of the stolen meals.

The Interfaith Ministries for Greater Houston Meals on Wheels program delivers more than 4,000 meals to homebound seniors throughout Harris County every weekday. The program also delivers breakfast and weekend meals to those seniors who are most frail and needy.

For more information on donating to Meals on Wheels please visit https://www.imgh.org/.