Muhammad Ali and the Mosque he helped establish

HOUSTON - It’s no secret Houston has a bustling Muslim population with residents stemming from all walks of life. There’s a rich tapestry of work focusing on the legacy left behind by Muslims in this city, yet little has been touched on when it comes to African American efforts.

For example, Houston’s oldest and most historic mosque, Houston Masjid Al-Islam, located in the 6600 block of W Bellfort Ave. in the Third Ward, was set up in 1978 through funds donated generously by Muslim activist and the late great boxing champion, Muhammad Ali, and his manager Jabir (Herbert) Muhammad. 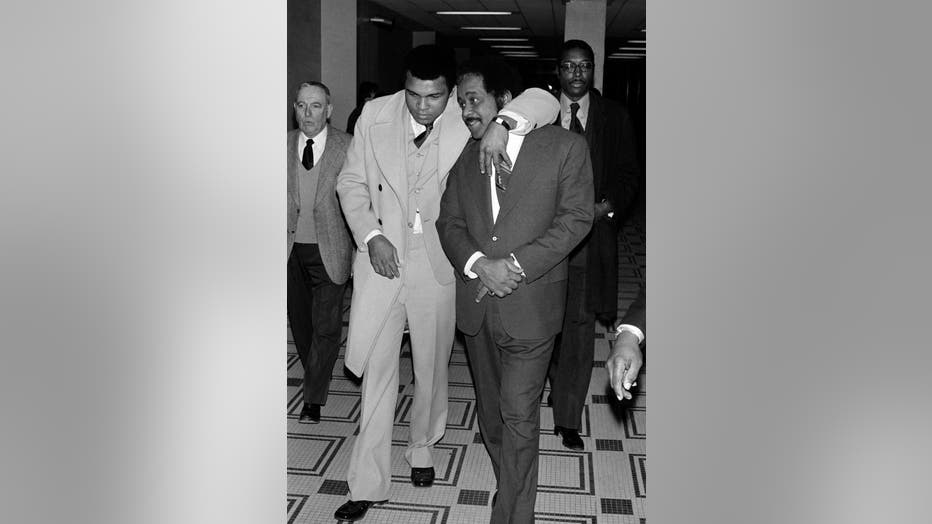 Boxer Mohammed Ali with his manager Jabir Herbert Muhammad during his March 1976 visit to Paris, France. (Photo by François LOCHON/Gamma-Rapho via Getty Images)

It was a Christian Science church that would later be converted into a mosque, but the journey in its development took nearly 30 years in the making, starting in barbershops before moving location to location in Houston’s Third Ward.

This story is not well-known among many residents, arguably because these Muslims were just a few years prior, practicing under the Nation of Islam (NOI), a movement that other Muslims considered heretical.

Regardless of the NOI’s perceived unorthodox teachings, African American Muslims like Eugene Wazirudeen Farooq who began in the NOI, remain grateful for the lessons he gained. Farooq is a retired prison chaplain and one of the pioneers of the Houston Masjid Al-Islam. During an interview, he explained the evolution from the NOI to Sunni Islam as miraculous. 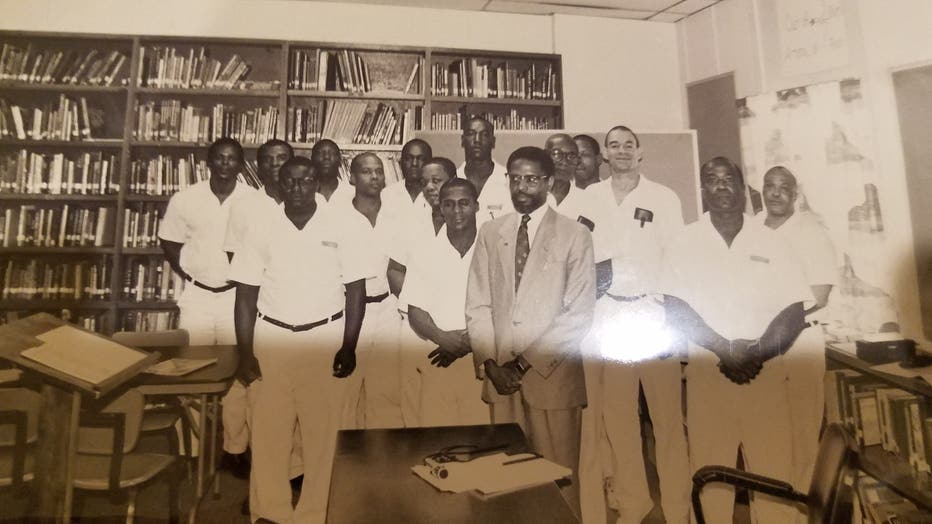 Imam E. Farooq is a retired Muslim Chaplain for the Texas Department of Criminal Justice (Photo courtesy of E. Farooq)

"Just imagine, people come from that kind of thinking to where we are now; embracing the whole, universal concept of Islam… that is a miracle!" he exclaimed. "I mean, that is really a miracle. [Be]cause if you could get in my head back then, and saw my thinking, you would say, "[M]an alive! What’s going on over here?"

Joining the Nation of Islam

Farooq joined the NOI back in 1972 after a classmate from Texas Southern University invited him to (what the NOI at the time called) Temple No. 45. He worked extensively for Houston’s Islamic community serving as the temple (and later renamed, Mosque) secretary. He described his experience with the NOI as his spiritual awakening to his surrounding struggles. 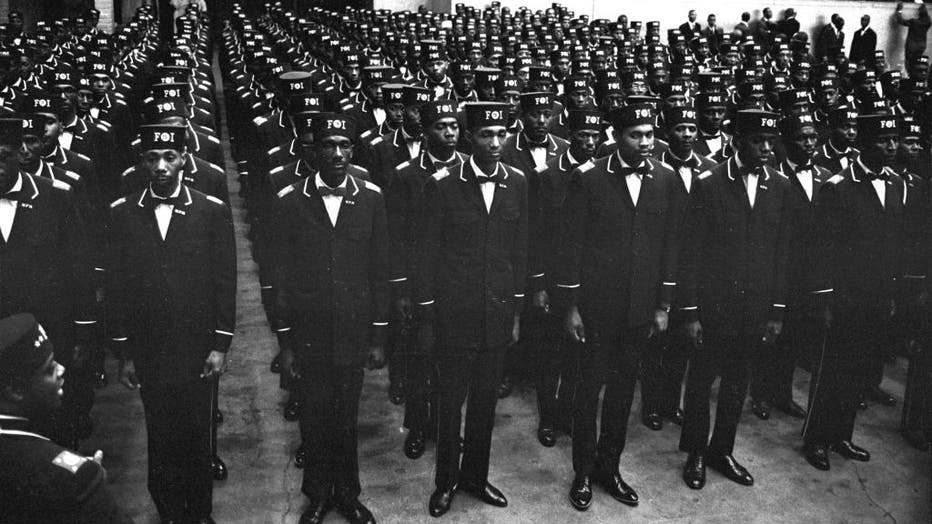 Uniformed men in the uniform of the Fruit of Islam, a subset of the Nation of Islam, stand at attention during the Saviour's Day celebrations at General Richard Jones Armory, Chicago, Illinois, February 26, 1967. (Photo by Robert Abbott Sengstacke/Ge

"I was afraid to go to the NOI meetings because I thought, [in those meetings] they brainwash you. Really, they wash your brain is what they do," Farooq said. "Although their teaching was very different [from the Sunni Islamic teachings] …I can say that was my rehab. That’s what got me really converted to what I see now as the perfect path to Islam."

This "perfect path" Farooq referred to involved W.D. Muhammad incorporated a strong African American identity within Islam. In other words, he explained Islam to his followers in a language that African Americans could understand and identify with.

MORE FROM THE AUTHOR: Muslim LGBTQIA+ activist working to set up first inclusive mosque in Houston

Before embracing Islam however, Farooq said his first exposure to Islam began around 1955 in Houston’s Third Ward, "as a little kid… in the barbershops, because that was one of [the NOI’s] main ways of propagating Islam, as they knew it."

In fact, Islam in Houston began in the barbershop of a man named Charlie Boyd, who first learned about Islam, through the Nation of Islam, in 1945. Boyd was a respectable member of his neighborhood and his barbershop held the reputation as a safe space for African Americans to talk about religion and politics. 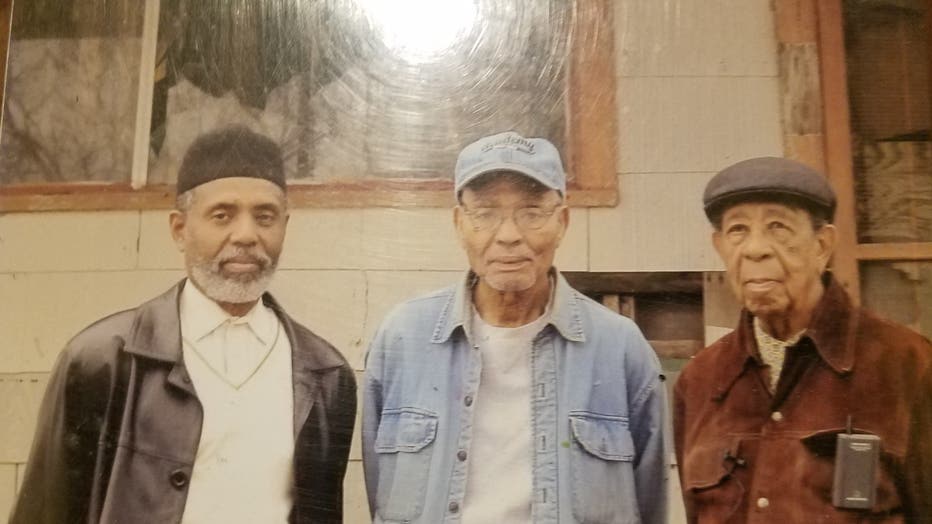 Farooq claimed that NOI members would later meet in the homes of those who embraced Islam.

From Temples to Mosques

Then after that, "in the early ‘60s, they rented a small place on Dowling Street [in Houston’s Third Ward] …the heart of the African American community." It was on this street, that Farooq said. "The first, we called them at the time, temple …was established."

In the early 70s, they moved to a more permanent location, on 3400 Polk Avenue, where Farooq first attended and later become a secretary for, when he joined the NOI. Following the death of the Honorable Elijah Muhammad in 1975, and the new leadership under his son, Wallace Deen (W.D.) Muhammad, gradual changes occurred to better align his followers with the Muslim world. 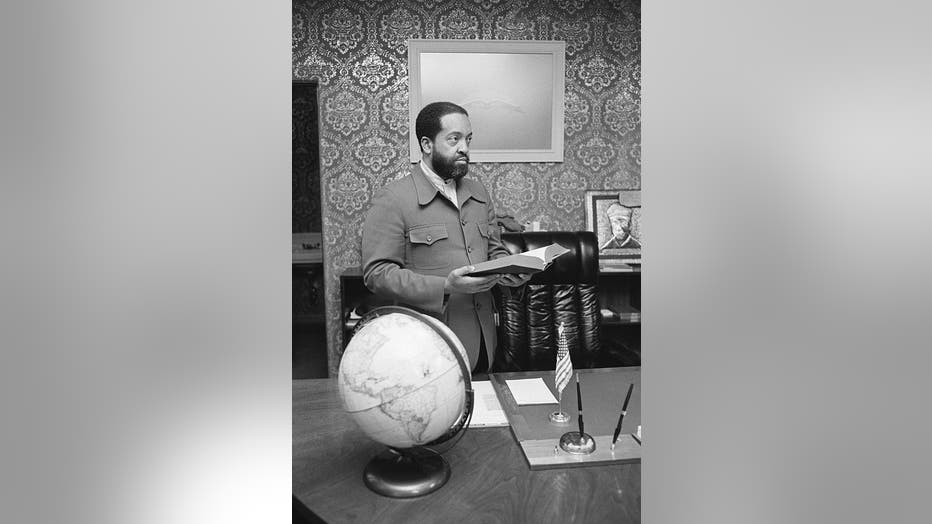 (Original Caption) 4/24/77- Chicago: Wallace Muhammad, leader of what most people still call the "Black Muslims", holds the Koran in his in his headquarters at the Elijah Muhammad Mosque No. 2 during recent interview. Photograph.

Among these changes, one involved them altering their vernacular with more "Islamic" – that is, Arabic words. For example, they dropped words like "minister" to describe their prayer leaders and replaced them with "Imam." So, in 1976, Farooq and other African American Muslims in Houston renamed their facility, "from ‘Muhammad’s Temple of Islam’ to ‘Muhammad’s Mosque.’"

They stayed at this mosque for several years before moving, yet again.

"We went back on Dowling Street to an old building, which used to be a ballroom," Farooq recalled. "Matter of fact, it was one of the most popular dance places in Houston, and we turned it into a mosque."

The dance hall Farooq referred to was none other than the El Dorado Ballroom on Elgin Street in Downtown Houston, a popular and historic hot-spot for Mexican, African, and Anglo-Americans dating back to its opening in 1939. 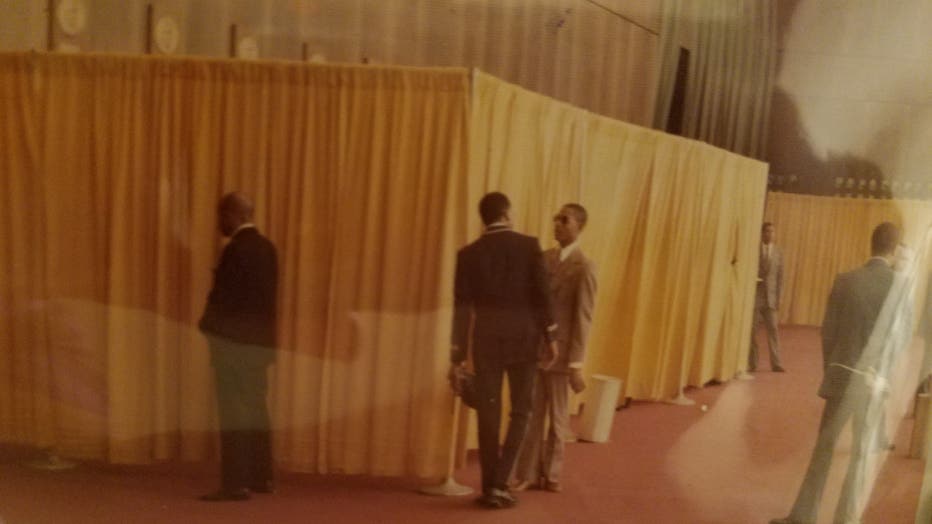 Farooq said they stayed at that location for about a year and then moved to the South Park area in Southeast Houston, where they rented a facility on Martin Luther King Blvd.

"We selected this place because we felt we could be very effective in changing the minds and the attitudes [about Islam] of the people in that area," he explained.

An even bigger change for Farooq was when a new Imam came down in 1977.

"Imam [W.D.] Muhammad assigned a brother by the name of Ibrahim Kamal Uddin to Houston," Farooq said. "When Kamal Uddin came, he saw the need for something that belonged to us."

In other words, Kamal Uddin felt they needed to find a place within the heart of Houston’s African American community but would simultaneously exhibit their uniqueness as Muslims.

Imam Farooq sought to oblige his request by searching for what Imam Kamal Uddin described as the lacuna in what they needed to be entirely devoted to Islam.

"I just so happened to be driving through [Bellfort Ave.] and I saw this church, it had a ‘For Sale’ sign and I thought, this might be a good place to start," he said. 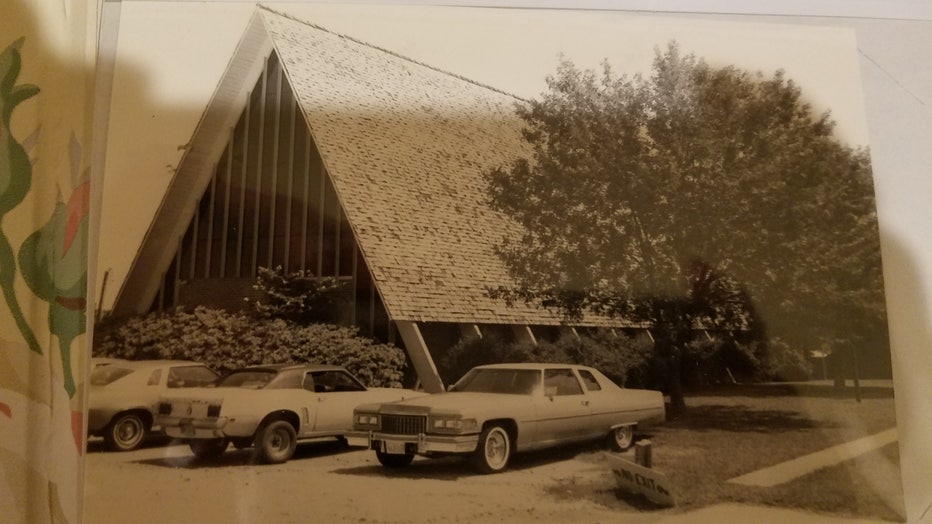 Farooq said they were eager to purchase this location but would need some help. However, thanks to Muhammad Ali, they made the purchase.

"We negotiated with the realtors," he continued. "We called up Imam W.D. Muhammad [and], in turn, he got in contact with Muhammad Ali and…along with his business partner, Jabir [Herbert] Muhammad, who was W.D. Muhammad’s brother, [and together] they put up the money to buy the facility."

Farooq noted that interestingly, the former church, The First Church of Christ Scientist, "didn’t have any crosses, no symbols, anything [of the like] in it, just plain structures." 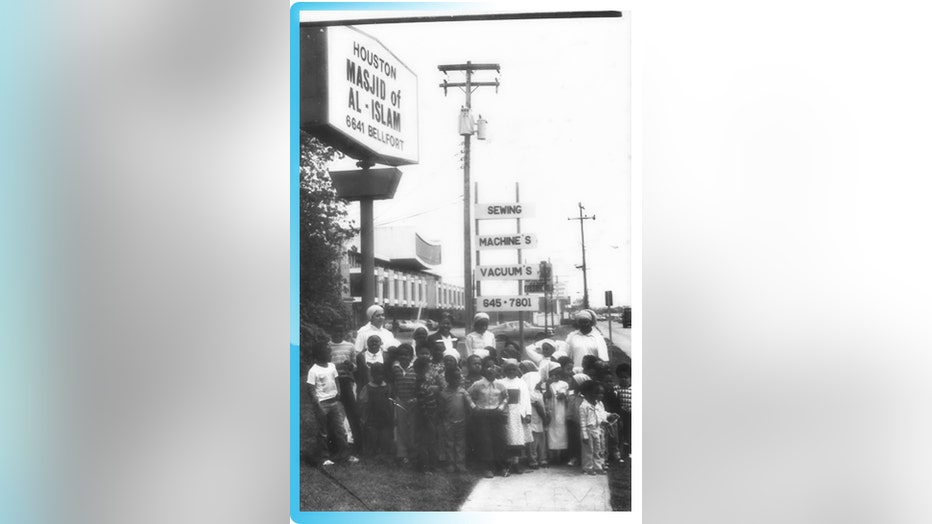 Certainly, this made it much easier to make the transition to a mosque, with respect to its earlier owners.

"We took the pews down…put down our prayer rugs, and put the name: Houston Masjid Al-Islam on the billboard, and we began to practice Islam as close as we possibly could in line with the Sunnah of the prophet…and of course, our holy book, the Qur’an," Farooq explained.

Houston Masjid Al-Islam’s purchase was such a momentous occasion that W.D. Muhammad traveled to Houston for the mosque’s grand opening in April 1978. 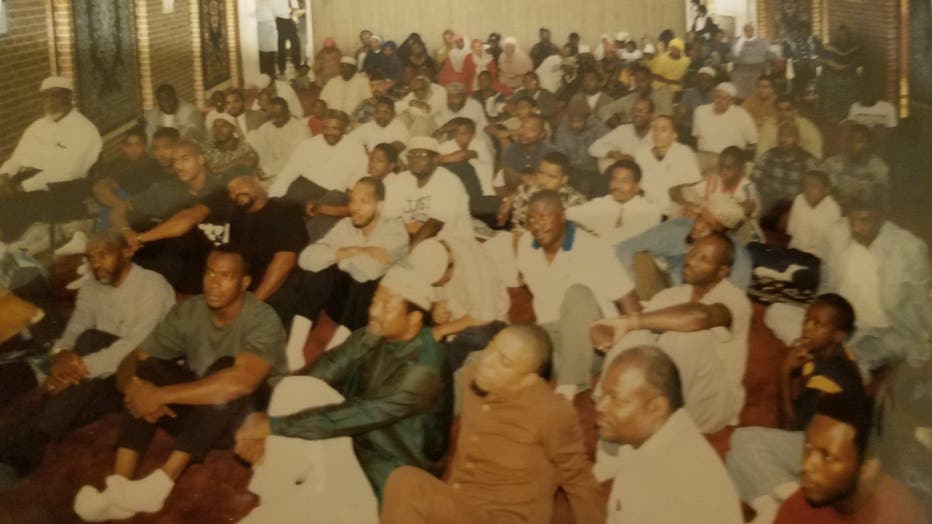 However, according to Farooq, W.D. Muhammad brought down their enthusiasm when he, "instructed us to tear down the building and build something that was reflective to what we represented as Muslims."

Understandably, Farooq and others were reluctant to fulfill such a request. Especially considering the extensive work they did on the mosque.

‘Once a church, always a church’

"Although it was a former church, this was one of the best facilities in the country, because we really made it look like a mosque," Farooq recalled. 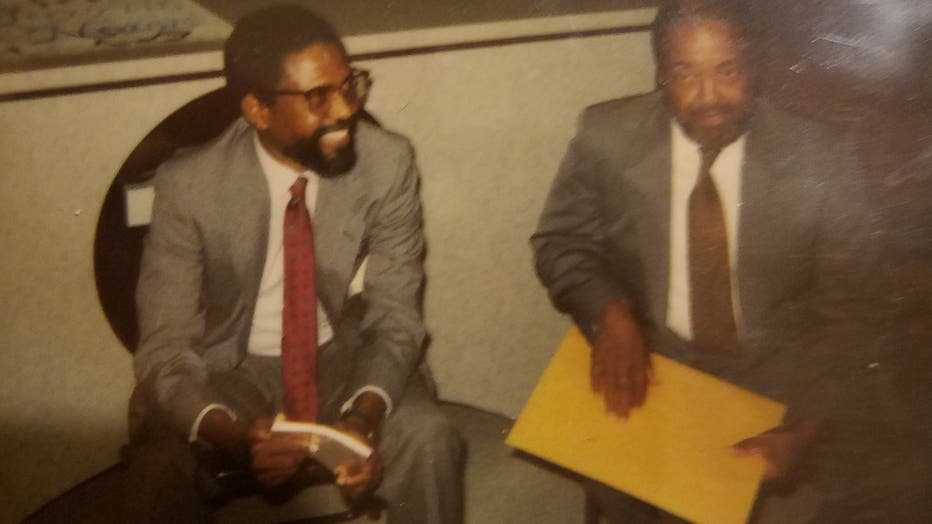 "Once a church, always a church," he explained.

It was hard to argue that sentiment considering that many African American Muslims like Farooq, were once Christians that later came to Islam. Therefore, to worship in a church as Muslims, seemed like they were not progressing properly.

In September 2008, a hurricane unexpectedly destroyed Houston Masjid Al-Islam. To make matters worse, W.D. Muhammad died around the same time from a heart attack. His brother Jabir Muhammad, who along with Muhammad Ali aided in buying the mosque, had passed a month prior. 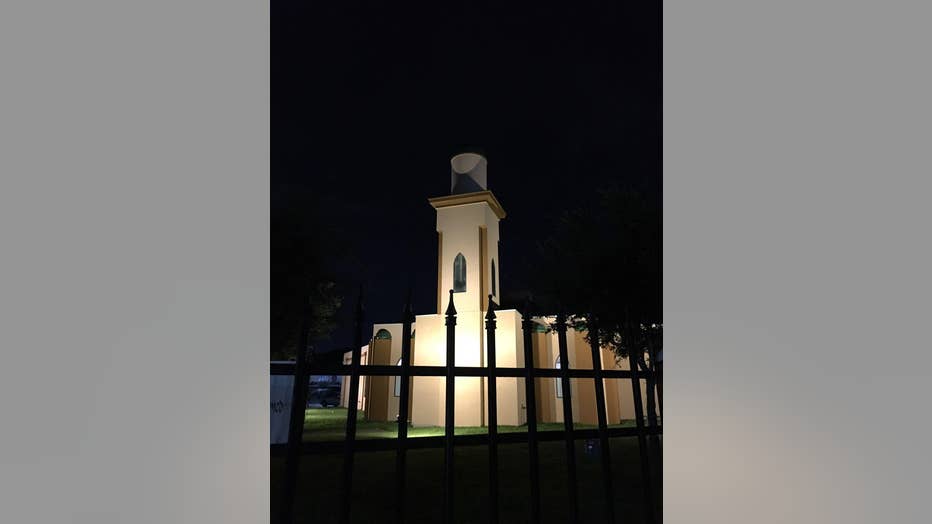 The mosque re-opened its doors in August 2010. Farooq and the other directors of the mosque paid homage to W.D. Muhammad by revealing the mosque’s final name change at the grand re-opening, after their great mentor.

Currently, Masjid WD Muhammad, formerly known as Houston Masjid Al-Islam, stands as the first mosque built in the United States (from the ground up) using West African architecture. When asked if it was safe to say that W.D. Muhammad got his wish in the end, Farooq smiled and said, "Absolutely."