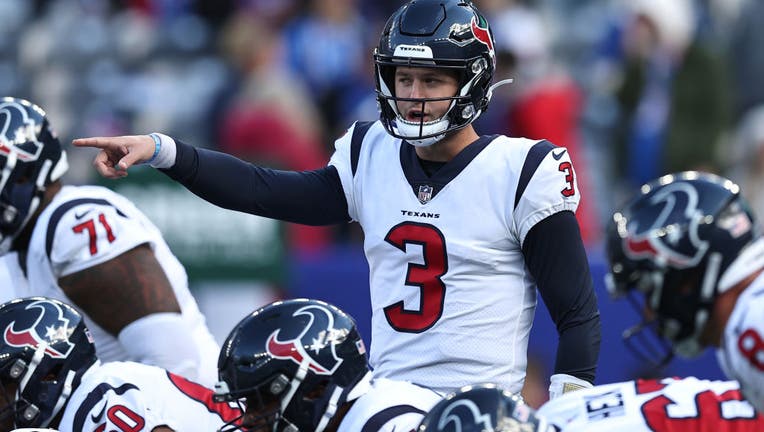 EAST RUTHERFORD, NEW JERSEY - NOVEMBER 13: Kyle Allen #3 of the Houston Texans warms up prior to the game against the New York Giants at MetLife Stadium on November 13, 2022 in East Rutherford, New Jersey. (Photo by Dustin Satloff/Getty Images)

HOUSTON - The Houston Texans have benched Davis Mills and will start Kyle Allen at quarterback Sunday against the Miami Dolphins.

"Reasons why, it’s like this for all positions ... you always look for the best option that gives you the best chance to win," he said. "And that’s where we are right now."

Mills, who is in his second year, has struggled as the Texans (1-8-1) have lost five games in a row. They are the only NFL team with just one win. Mills has thrown seven interceptions with just five touchdowns during Houston’s five-game skid.

A third-round pick out Stanford, Mills has started each game this season for the Texans and has thrown for 2,144 yards with 11 touchdowns and an NFL-high 11 interceptions.

"I wish everything was rolling the way we would like for it, the way we envisioned it happening and we didn’t have to make some of these decisions," Smith said. "But things haven’t gone well and we need to get it better. So we need to make some moves like this to see if we can jump-start it."

The 26-year-old Allen has not played this season, and his last appearance came on Dec. 26 of last season against Dallas while he was with Washington.

"We feel pretty confident that he can throw the ball," Smith said. "He’s mobile enough and he’s earned the opportunity."

Allen, who is in his fifth NFL season, has mostly worked as a backup, with his only season as a starter coming in 2019 with Carolina. That year he threw for 3,322 yards with 17 touchdowns and 16 interceptions in 13 games with 12 starts.

Mills opened last season as a backup to Tyrod Taylor, with Deshaun Watson sitting out after a trade requests and lawsuits by two dozen women alleging sexual misconduct during massage sessions. But Taylor got hurt in Week 2, thrusting Mills into the starting job.

He came in for Taylor in Week 2 and started the next six games while Taylor recovered from an injury. Taylor started the next four games but struggled and was benched in the fourth game to make way for Mills to finish the season as the starter.

He showed some promise in that stretch and helped the Texans to wins in two of their last five games. But he failed to make progress this season and showed again and again that he couldn’t help the Texans close out games late.