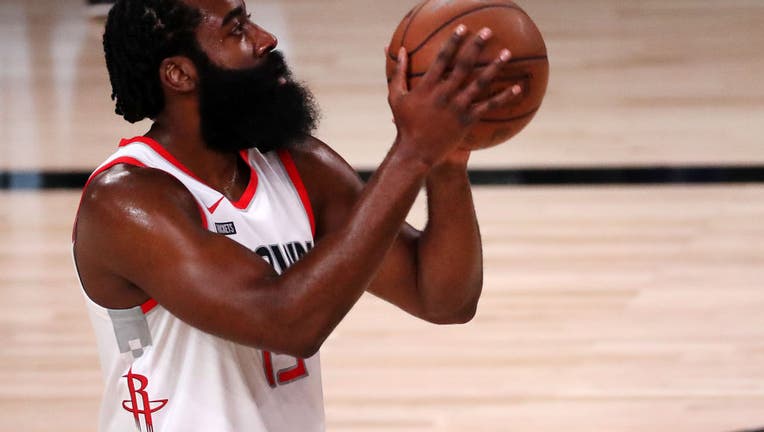 FILE: James Harden #13 of the Houston Rockets shoots the ball during the first quarter against the Los Angeles Lakers in Game One of the Western Conference Second Round during the 2020 NBA Playoffs at AdventHealth Arena at the ESPN Wide World Of Spor (Photo by Mike Ehrmann/Getty Images)

HOUSTON - The National Basketball Association has announced Houston Rockets guard James Harden has been fined and will have to quarantine.

According to a statement from the league, Harden was fined $50,000 for violating the league’s Health and Safety Protocols, which among other things prohibits attending indoor social gatherings of 15 or more people or entering bars, lounges, clubs, or similar establishments.

Harden took to social media to address the issue about why he was out at an event.

The NBA will also require Harden to quarantine for four days and continue to test negative before he can return to practice, games, or team activities, a league source tells FOX 26 Sports Director Mark Berman.

Harden's quarantine began on Tuesday, Dec. 22, so Harden can’t travel with the team. However, he could potentially play on Saturday in Portland.

On Wednesday during a news conference, Houston Mayor Sylvester Turner addressed how city officials are cracking down on establishments that are hosting large gatherings amid the pandemic.

"If anybody is going into these bars or clubs and they’re crowded, jammed pack and people don’t have their mask on then that’s just a community spreader," Turner said.

The fine comes after the NBA announced on Wednesday that the Rockets game versus the Oklahoma City Thunder was canceled due to COVID-19 concerns.

The National Basketball Association has announced that the game tonight between the Houston Rockets and the Oklahoma City Thunder has been postponed in accordance with the league’s Health and Safety Protocols.