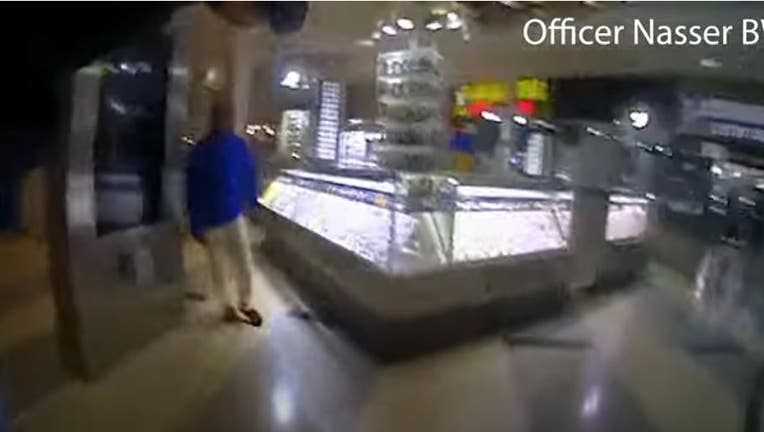 HOUSTON - The Houston Police Department has released body-worn camera video following a deadly shooting at PlazAmericas where a San Jacinto County Precinct 1 Constable and the suspect were killed.

The shooting occurred around 4 p.m. on Wednesday, February 23.

According to Houston police, when officers arrived, they learned that San Jacinto County Deputy Neil Adams was shot inside a store.

Officers later located the suspect, 35-year-old Chaz Harrison, was holding an ice pick, which officers thought was a knife.

Officers told Harrison to drop the weapon, but he refused to follow the officers' commands.

That's when, police said, he charged at officers and that's when two officers fired multiple shots from their weapons toward Harrison.

In the body worn video, you can see Harrison get back up and attempt to walk away from the officers.

The officers then used a Taser, causing Harrison to fall to the ground.

Police said Harrison continued to resist arrest, but was taken into custody and officers immediately began to render aid.

Harrison was taken to the hospital where he later died from his injuries.

San Jacinto Constable Deputy Neil Adams, who was working an extra job at the mall, was found with multiple gunshot wounds and also died as a result of the incident.

We're told Constable Deputy Adams worked with the San Jacinto Co. Pct. 1 since 2012 and was the environmental officer for the entire county. Constable Roy Rogers held back tears during his remarks last month calling Deputy Constable Adams a hero.

Family and friends gathered Thursday to say their final goodbyes to a San Jacinto Constable Deputy Neil Adams, who was killed in a mall shooting in southwest Houston.

Constable Deputy Adams' wife, who was also at the news conference following the deadly shooting last month, shared heartbreaking testimony but also asked for support to other officers like her husband.

"My husband always said that you can either be a sheep or sheepdog. And I want everybody to pray for all the sheepdogs out there that are protecting everybody," she said. "They get a bad rap and they just want to protect that's what they want to do in their heart. And everybody's turned their back on them. And everybody should pray for all of them because they're here for you."

The wife of San Jacinto Pct. 1 Constable Deputy Neal Adams, addressed the public during a press conference. This comes hours after he was shot and killed by a suspect while working security at PlazAmericas Mall in southwest Houston, asking for prayers and support to other officers.