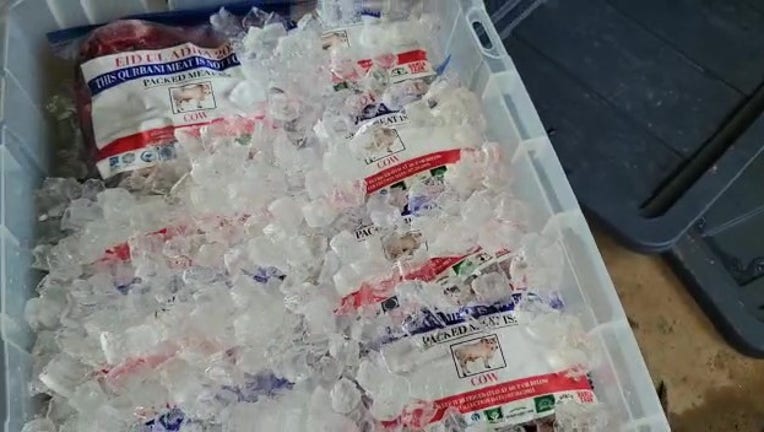 HOUSTON - Across the world, Muslims celebrated the sacred holiday known as Eid al-Adha. It is one of two holidays in Islam, which focuses on the importance of sacrifice.

And in Houston, at least two non-profit organizations spent the holidays giving back to communities in need with one group distributing toys and clothes to children, while the other was giving out food to residents in need.

The first event was held this past Sunday from 9 a.m. – 12 p.m. by the House of Charities organization in collaboration with Starring Humanity, DeBakey High School for Health Professionals, and the Houston Police Department at Ashford Crescent Oaks on the city’s southwest side.

Based on an interview with Hashmat Effendi, executive vice president and founder of House of Charities, the event was dedicated to providing children with clothes, pajamas, books, toys, school supplies, and groceries.

"It is a beautiful event," she said. "And what we are doing is we are going in one of the apartment complexes that has over 500 apartments. And we will be serving the refugees. There are refugees from Afghanistan, Iraq, also from Syria. And so we are ready to serve 1,000 individuals with goodies."

Interview with House of Charities

This was the 25th annual Eid distribution House of Charities held, Effendi mentioned, which is dedicated to providing help to children – specifically who have suffered severe burn injuries – and help provide reconstructive surgery.

However, ultimately she says it’s about serving "underprivileged children with dignity, and with passion with love."

And by carrying out this mission of service, especially during a religious holiday, Effendi says it’s a testament to faith and expressing devotion to a higher power.

"The reason for celebrating this Eid is sharing, sacrificing, pleasing other people through pleasing God," she explained. "And how do you please God? By pleasing the people around you; His human beings."

"Since I became a liaison I do a lot of trips here, so kids recognize me over there. They come, run up and give me hugs and stuff and go talk to me," Officer Hussain said. "It was really awesome and I’m happy I got to see them."

We interviewed senior police officer and South Asian & Middle Eastern community liaison for HPD, Danish Hussain on his work at a toy distribution at a southwest Houston neighborhood to celebrate the Islamic holiday known as Eid Al-Adha.

As a community representative since January 2021, Officer Hussain’s responsibilities involve bridging gaps with residents, whether that’s through language barriers or letting them know he’s there for them.

"I have a little bit of background in the community because I grew up in this town. And I used to run the movie theater, where all community members used to meet," he explained. "So within six months, there’s like this [feeling] that there is somebody we know that is out [t]here, so it’s a really good reaction [from the community.]" 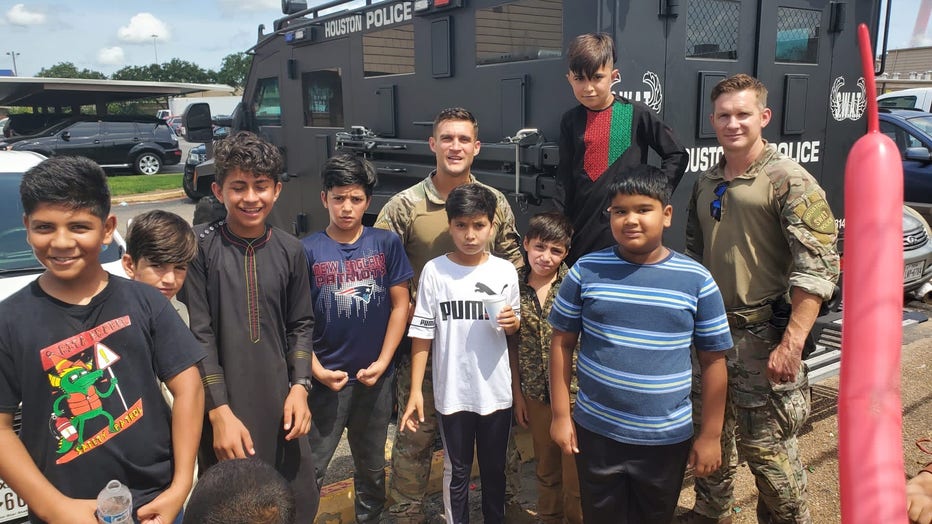 And for Sunday’s event, Officer Hussain’s services were certainly necessary.

"This [event] happened inside the apartment complex where there is a lot of new arrivals," Officer Hussain said. "And then there was like [a] tremendous amount of kids. Half of them did not even speak English … I can speak some of the languages, so it was okay for me to talk to them." 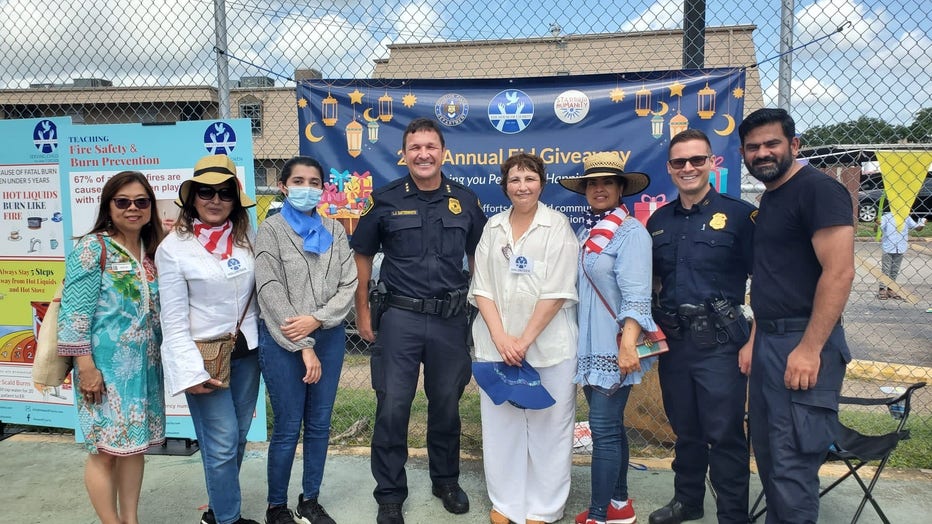 In the U.S., the actual day of Eid began Tuesday and lasted until Thursday. During that time, Muslims around the world remember the story of the prophet Abraham when he was asked to sacrifice his son, who was replaced by a lamb (or in other scriptures, a ram). To celebrate and remind themselves of that devotion and trusting in a higher power, Muslims make a halal sacrifice of a lamb or cow, which involves cutting a part of the animal by a nerve on its neck, where it doesn't feel pain, but drains the blood from it thereby making the meat clean and permissible (halal) to eat. Afterward, Muslims join loved ones for a giant feast of the meat they've sacrificed.

However, members of the Olive Branch Muslim Family Services, who were joined by several other organizations, farms, as well as mosques, decided to take time out for residents in the Greater Houston area and distribute sacrificed meat to those in need.

"We're kind of doing a crowdsource meat distribution throughout the city of Houston," said Yalda Ahmadi, program director for Olive Branch Muslim Family Services said. "We're working with multiple local farmers and getting the special sacrifices out to the community members … this will be shares of beef shares, lamb shares, goats for people in need."

A local nonprofit spent the religious holiday of Eid Al-Adha, which involves a giant feast was spent packing food for residents in need across the Greater Houston area. And video provided by one of the partners shows how the meat was packed safely before it was widely distributed.

During an interview with Ahmadi, she said it’s not the first time the group has done food distributions during Eid.

FOX 26 Houston interviewed the program director of Olive Branch Muslim Family Services to learn more about a crowdsourced food distribution event for residents in need, which was held this week to commemorate the Islamic holiday of Eid.

This year’s distribution is especially important this year, as the food provides assistance for refugees and residents by giving them a slice of home, so to speak, as well as those who may have been struggling amid the coronavirus pandemic.

"Meat is really a staple of many immigrant diets, when they come through, let's say Middle Eastern, South Asian, and North African countries," Yalda said. "And it's something so special that is seen as a treat … so individuals and families are just so incredibly grateful." 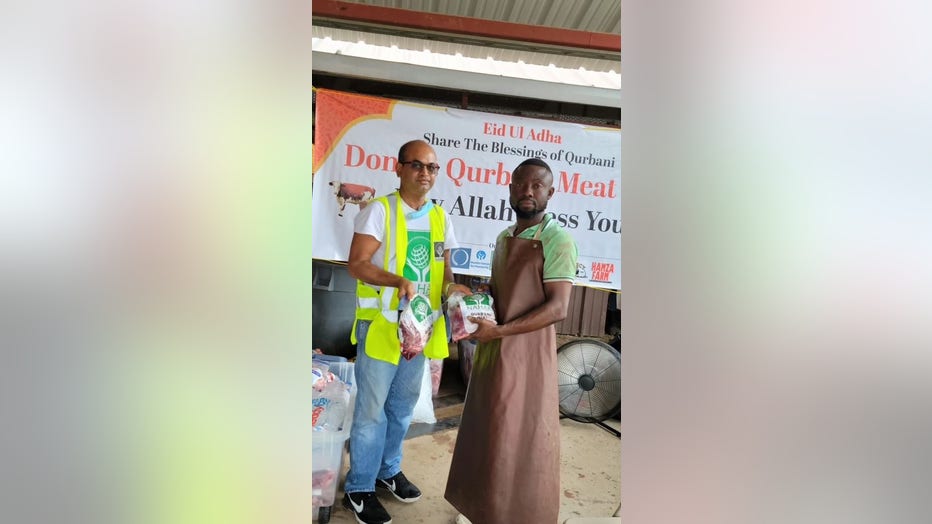 "And it really does provide, you know, the protein nutrients that sometimes may be lacking from their diets, when they do come from families that are from lower socioeconomic statuses," she added. "Or just due to the current pandemic have had trouble keeping stable jobs or their refrigerators and freezers full."

Even partners in the food distribution expressed their excitement and gratitude to help celebrate Eid.

Ultimately, Yalda echoed the statements from Officer Hussain and Effendi citing the distribution as a way to practice their faith and share that dedication with the community.

"In the Muslim faith, we are commanded to help our neighbors to help those in need," she explained. "And this is just an extension of that." 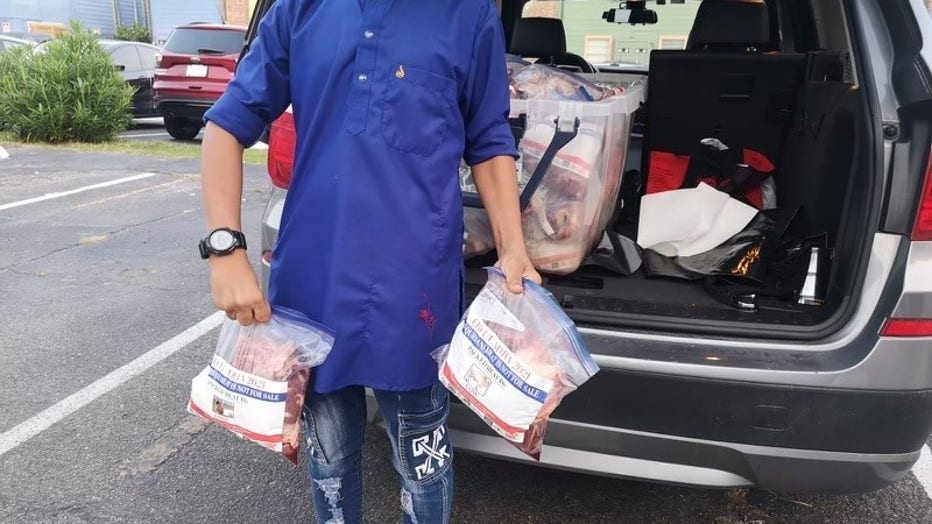 To learn more about the Eid food distribution, see a complete list of partnering organizations, and how you can help, click here.