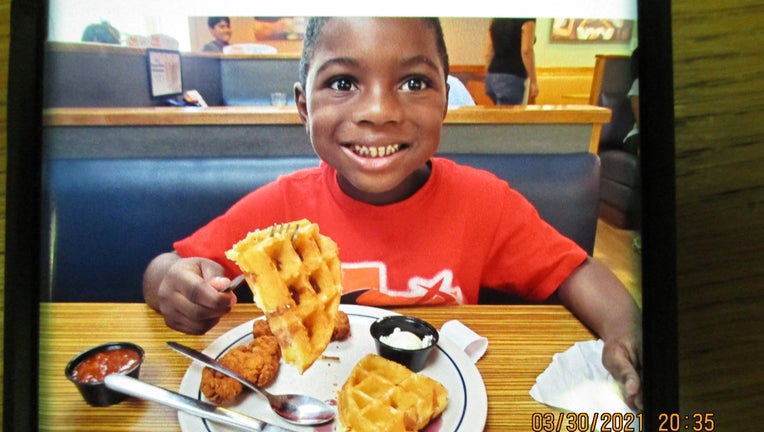 HOUSTON - A Houston mother and her boyfriend have been indicted for capital murder in the death of an 8-year-old boy who died at a motel in March 2021, officials say.

On Thursday, Kayla Holzendorf, 25, and her boyfriend, Dominique Lewis, 29, were indicted by a Harris County grand jury for the incident on March 23 of last year.

"The way this little boy died is almost unthinkable and absolutely horrifying," Harris County District Attorney Kim Ogg said. "We believe he was handcuffed, bound at the ankles and legs with ligatures and duct-tape, had his mouth taped shut and was beaten so severely that he either died from blunt force trauma or suffocated on the blood from his broken teeth."

Officials say the boy's mother and her boyfriend are accused of carrying out the attack.

According to authorities, the couple called 911 on the night of March 23 to report that Keyontae Holzendorf, 8, had drowned in the bathtub at the motel where they lived.

According to the district attorney’s office, court records show the boy was wet and there was steam in the bathroom when first responders arrived. Lewis also allegedly had water on his clothes.

The district attorney’s office says court records show the boy had numerous new and old injuries on his body, including severe ligature marks on his ankles and wrists (from handcuffs), broken teeth, and large pieces of skin missing from his thigh, chest, upper arms, and genitalia, consistent with duct tape being ripped off frantically.

The couple reportedly told police Keyontae had not been to school in a year and a half, didn’t have any friends, and he would spend his time with them instead.

According to the DA’s Office, the couple reportedly said they would begin their days by buying muffins, placing them in a basket, and then having the boy say they were made by his mom as he sold them in a grocery store parking lot.

"This is obvious child torture, and the evidence is clear that the defendants acted intentionally; it was capital murder," said Assistant District Attorney Gilbert Sawtelle, who is prosecuting the case and is a chief in the DA’s child fatality division.

If convicted of capital murder for killing a child under the age of 10, both could face the death penalty or life in prison without parole. The district attorney's office says decisions about whether to seek the death penalty are generally made by a committee of senior prosecutors months after a defendant has been charged.

The case was investigated by the Houston Police Department.