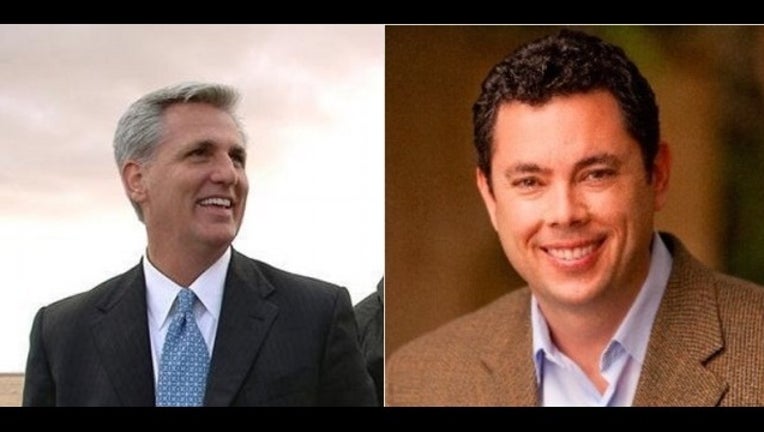 WASHINGTON (AP) — House Republicans are in upheaval as their front-runner for speaker faces fresh opposition and conservatives push to postpone leadership elections.

With daunting challenges ahead, it's increasingly clear that Speaker John Boehner's resignation only deepened divisions in the fractious caucus.

A day after announcing his candidacy for speaker, GOP Rep. Jason Chaffetz of Utah sought to present himself Monday as a new face who can unite the House in the wake of Boehner's sudden resignation last month. Boehner's deputy, Majority Leader Kevin McCarthy of California, remains the favorite, but Chaffetz's candidacy ensures there will be no coronation.

The House GOP is supposed to vote by secret ballot on Thursday, following by a floor vote in the full House later in the month.

"If we don't inject new blood into the leadership team, our constituents are going to be irate at best," Chaffetz told reporters on Capitol Hill. "There's a massive drumbeat out there that the status quo is not what we sent you there to perpetuate. This is a national wave, it's not something that was driven by Jason Chaffetz. I'm just someone who was smart enough to recognize it and try to get ahead of it."

Chaffetz, the 48-year-old chairman of the House Oversight and Government Reform Committee, has used that post to launch high-profile investigations of the Secret Service, Planned Parenthood and other issues.

His candidacy underscores chaos in the House little more than a week after Boehner, R-Ohio, announced he would resign rather than face a possible floor vote to depose him, pushed by hard-line conservatives.

In the days immediately following, McCarthy was viewed as the presumptive favorite to replace the outgoing speaker.

But that dynamic began to shift, particularly following McCarthy's gaffe last week suggesting that the purpose of a special House committee investigating the deadly 2012 attacks on the U.S. mission in Benghazi, Libya, was to drive down Hillary Rodham Clinton's poll numbers. Clinton, secretary of state at that time, is now the front-runner for the Democratic nomination for president.

McCarthy retracted the comment and said he regrets it, but it's given a potent weapon to Democrats ahead of a high-profile Oct. 22 appearance by Clinton before the committee.

McCarthy appears to have the support of a majority of House Republicans, making him the likely winner in secret-ballot elections set for Thursday.

But under House rules, that outcome does not guarantee that McCarthy will become speaker. He also has to win a public vote of the full House later in October. That outcome is less certain because of potential opposition to McCarthy from the same 30-plus hard-line conservatives who pushed Boehner out.

McCarthy could lose 29 Republicans and still come out with majority support on the floor, but so far he has not claimed he has the needed 218 votes locked up. But Chaffetz' ability to get 218 votes in the House seems even less certain.

That suggests ongoing tumult ahead in the weeks leading up to the floor vote, even as Congress is confronting a weighty to-do list, starting with raising the government's borrowing limit in early November. Amid the disarray some lawmakers are seeking more time to consider their options. Rep. Mick Mulvaney, R-S.C., has drafted a letter seeking a delay in elections to lower-level leadership posts.