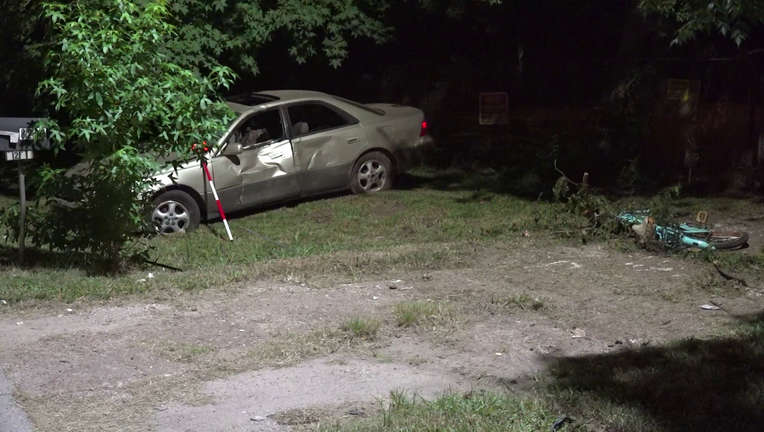 HOUSTON - One woman is dead after being hit from behind by what authorities believe was an intoxicated driver.

Teare said a late-90s Lexus was traveling on the road at a very high rate of speed, lost control, crossed over into oncoming traffic and struck a bicyclist who was on the side of the road. The vehicle carried the woman a few hundred feet, crashed into a tree, and vaulted her further down the road.

The bicyclist was pronounced dead at the scene by authorities.

Authorities said they received information that the victim was an older female who is well-known in the area for coming and feeding stray dogs every day where they congregate. Witnesses told authorities that the woman used her own money, if not a disability check, to feed the dogs.

Teare added that the woman had just finished feeding the dogs and was heading home when she was struck from behind.

Teare said their investigation is continuing but preliminary information showed that the driver was high on drugs, possibly PCP. Additional 911 calls from several blocks back were received by authorities stating the driver was traveling over 100 miles per hour.

“She was harming no one, out of the kindness of her heart taking care of these animals and this completely selfish act of this person driving high on PCP ended her life. Just for nothing,” said Teare.

Once the driver is released from the hospital, the driver will be charged with intoxication manslaughter and taken to jail.