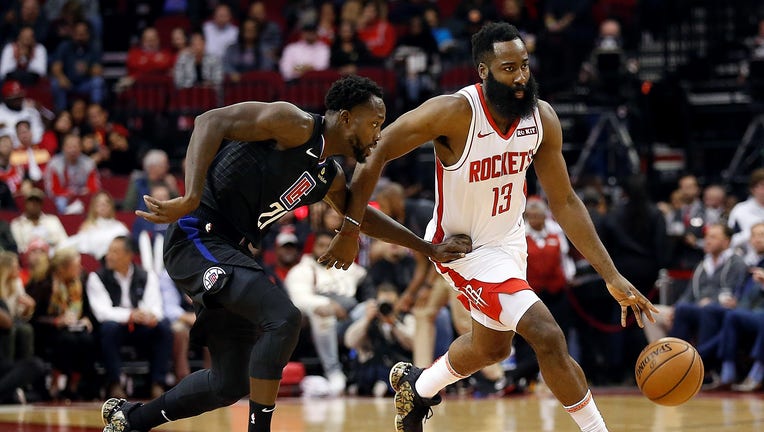 HOUSTON, TEXAS - NOVEMBER 13: James Harden #13 of the Houston Rockets brings the ball up court as Patrick Beverley #21 of the Los Angeles Clippers applies pressure during the first quarter at Toyota Center on November 13, 2019 in Houston, Texas.

Houston was up by two with about two minutes left when former Rocket Patrick Beverley fouled out. Harden made both free throws before grabbing a rebound on the other end and hitting a 3 to make it 95-88.

Beverley was given a technical foul during a timeout after the play and Harden hit the two free throws.

Rivers was then given two technical fouls and ejected to the delight of son Austin Rivers, the Houston guard who laughed and signaled for the officials to T-up his father. Doc Rivers spent several more seconds screaming at the referees before slowly walking across the court and to the locker room.

Harden made both free throws before JaMychal Green made a 3 for Los Angeles. But Harden stole the ball from Kawhi Leonard, and Tyson Chandler made a reverse dunk with 37 seconds left to make it 100-91.

Leonard led the Clippers with 26 points, 12 rebounds and seven assists and Lou Williams added 20 points off the bench.

Clint Capela had 12 points and 20 rebounds before going to the locker room with about 4 1/2 minutes remaining after taking a blow to the face while fighting for a rebound. Capela has had at least 20 rebounds in three straight games to become the first Rocket to do that since Moses Malone in 1982.

Clippers: F Paul George (shoulder surgery) is getting close to returning and could make his season debut in the next few days. ... Beverley had six points and two rebounds. ... Green had 20 points.

Rockets: G Eric Gordon had arthroscopic surgery on his right knee and is expected to miss about six weeks. Gordon was injured on Monday night against New Orleans and general manager Daryl Morey announced that he had surgery on Wednesday. ... Houston made 14 of 42 3-pointers.