The 92-year-old wasn’t able to see anyone other than immediate family since March due to the coronavirus pandemic. So, her family and closest friends decided to surprise her with a parade, two days before she was scheduled for a heart procedure.

LOS ANGELES - A 92-year-old grandmother was surprised with a parade of love and well-wishes ahead of a major heart procedure.

Grace Burns, who goes by Onnie, wasn’t able to see anyone other than immediate family since March due to the coronavirus pandemic. So, her family and closest friends decided to surprise her with a drive-by “good luck parade” on Saturday, just two days before she was scheduled for a heart procedure.

RELATED: Grandfather moved to tears after first-generation college grads surprise him outside of nursing home

Onnie’s granddaughter, Jillian posted a video of the surprise driveway parade to Instagram writing, “I hope everyone has an Onnie in their life.”

Onnie initially thought she was going outside to take a family photo. “It was my mom's birthday that day, so Onnie didn't think twice about the cute little setup we had for her on the porch. She figured it was for my mom's birthday,” Jillian revealed to FOX TV Stations. 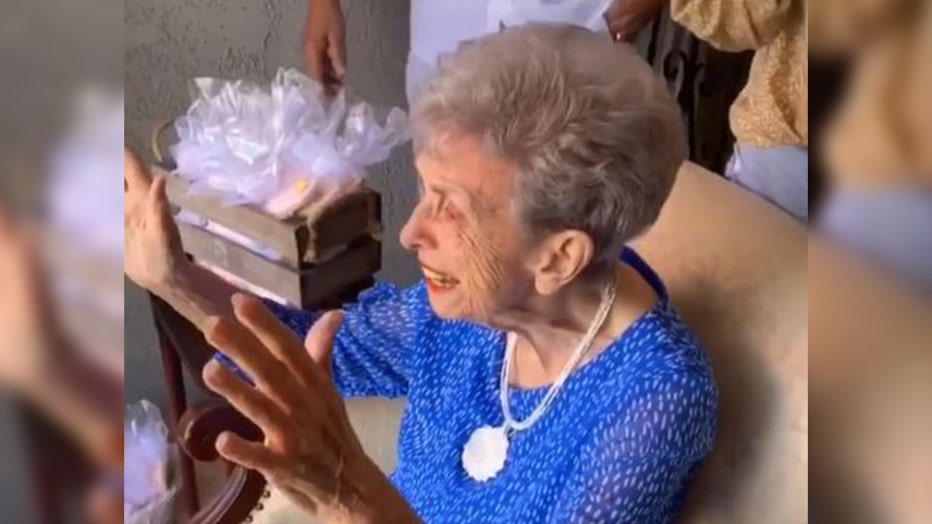 Grandma was surprised with parade before heart procedure

The video showed close friends and family showing up to Onnie’s home in Northridge, California in their vehicles with signs and balloons displaying messages including, “you are loved” and “feel better soon.”

Onnie had been diagnosed with aortic stenosis. Her aortic valve was only opening to the size of a pencil eraser when normally, it should be the size of a quarter. Monday morning, Onnie had a successful TAVR procedure at Cedars Sinai, and is resting comfortably at home.

Jillian said Onnie was overwhelmed with love and well-wishes, and cannot believe all the attention she is getting.

“Nothing in my 92 years has ever surprised me as much as the parade and all the loving good wishes. Next, would be the astonishing outpouring of tributes from people around the world,” Onnie said. “I’m beyond grateful to so many people I’ve never met. They have contributed greatly to my happiness and my well-being.”

RELATED: Grandma’s reaction to surprise KFC delivery from granddaughter is everything

Jillian wrote that Onnie is a “woman who is the epitome of strength and grace. Someone who just loves you unconditionally. Always the life of the party.”

Jillian thanked the public for all their messages and prayers for Onnie. “She feels the love and she’s going to be back - better and stronger than ever,” Jillian said. “We are thrilled that so many other people can see how special she is!”