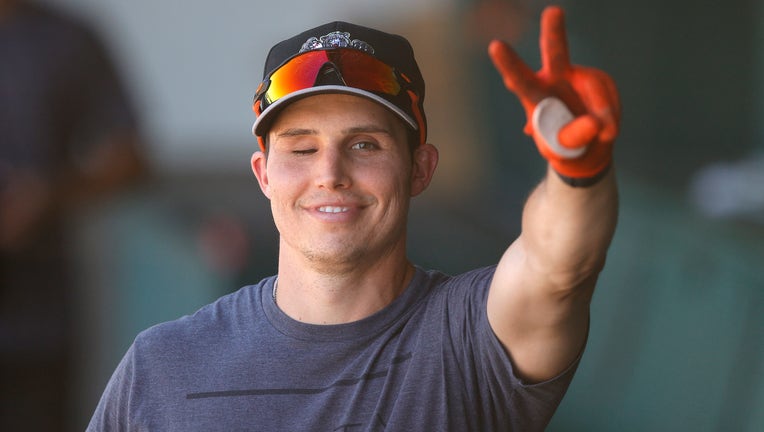 SACRAMENTO, CALIFORNIA - MAY 27: Drew Robinson #5 of the Sacramento River Cats waves from the dugout before a game against the Las Vegas Aviators at Sutter Health Park on May 27, 2021 in Sacramento, California. Robinson attempted suicide on April 16,

SAN FRANCISCO - Drew Robinson, the San Francisco Giants minor leaguer who survived a suicide attempt last year that took his right eye and has been outspoken about his ordeal and positive strides, announced he is retiring and will join the club's front office as a mental health advocate.

In a lengthy farewell note on Twitter, Robinson said he would play his final games for Triple-A Sacramento this weekend.

"Over the last year I've promoted self-love and self-care and the Giants are offering me the opportunity to transition to a role as a mental-health advocate," Robinson wrote.

"I couldn’t be more excited to remain in the game that saved my life. I remember the day after my suicide attempt, the first thought I had toward choosing to live came from thinking about playing baseball again. I did that, with one eye, and I’m grateful for the time I spent with the River Cats and the 11 incredible years I spent with the Rangers and Cardinals."

Robinson said while for years he focused solely on the physical skills of preparing for his sport, there has been so much mental growth this past year. He hopes to use his experiences to help others address their emotional well-being and said being an example "is truly humbling."

Free Giants tickets if you're vaccinated

The Giants are giving away two free vouchers if you're vaccinated.

"This past season has been a steep learning curve as I've prioritized putting in the work mentally and emotionally," Robinson wrote. "While I'm proud of my progress, growth is a continuous journey."

The 29-year-old Robinson was a fourth-round draft pick by the Rangers in 2010 out of Silverado High in Las Vegas. The infielder/outfielder had a career .202 batting average with nine home runs and 22 RBIs over three major league seasons with Texas and St. Louis.

Oakland outfielder Mark Canha applauded Robinson and the Giants for placing such importance on mental health, saying that during the course of a season "I don't feel so good, you kind of get in the blues a little bit."

"Professional baseball, as glamorous as it seems to the public and to the fans, it's a very difficult lifestyle," Canha said. "It looks glamorous from the outside but it doesn't always feel glamorous on the inside. It's hard. It's unlike any other type of sport that you can do in terms of travel and physical and mental stress. It's extremely hard to be a professional athlete, particularly baseball when you're playing every day. It takes its toll."