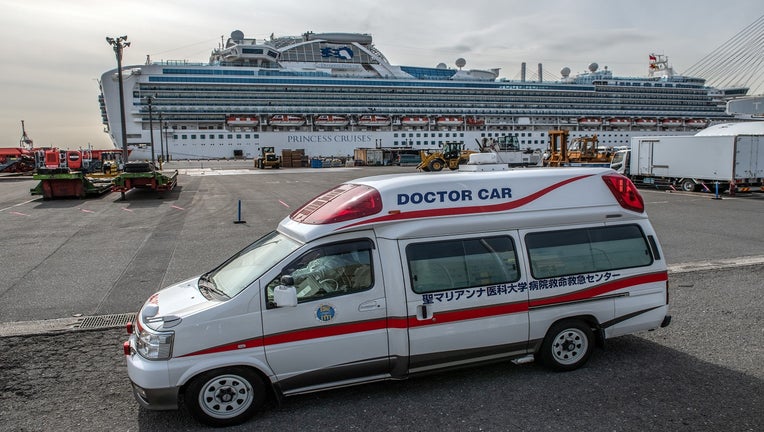 YOKOHAMA, JAPAN - FEBRUARY 07: Medical staff wearing protective clothing take a passenger diagnosed with coronavirus to hospital after removing them from the Diamond Princess cruise ship while it is docked at Daikoku Pier where it is being resupplied

FOX NEWS - A Georgia couple who was quarantined in different countries after their ill-fated cruise became a symbol of the coronavirus pandemic have been reunited.

Sherry and Dale Grizzle were separated for nearly three weeks after vacationing on the Diamond Princess last month and contracting the virus.

“We've never been apart like this before, and it was pretty stressful. That may have been the worst part of the whole deal," Dale Grizzle, 69, said Sunday on “Fox & Friends Weekend.”

He was quarantined in Japan while his wife was isolated in Washington state.

The Grizzles were reunited Wednesday, ending what Dale called "the first time ever in our life that we were apart."

The couple was onboard the Diamond Princess, which was docked in the Yokohama port near Tokyo under a 14-day quarantine after one passenger who left the ship earlier in Hong Kong was found to have the virus. More than 350 people on the cruise ship wound up testing positive.

Before the quarantine on the ship ended, the United States evacuated more than 300 Americans and put them in quarantine in the U.S. for another two weeks. Australia and Hong Kong also evacuated their citizens for quarantines, and Canada and Italy sent flights for their residents.

“When I first started having symptoms, it was just a mild sore throat and a headache and that lasted for several days. ... I didn't think anything of it, but Dale had already been diagnosed so I began to wonder if maybe I had the virus also,” Sherry said Sunday.

“I ran a fever for about two and a half weeks that I couldn't seem to get rid of, and I developed some pneumonia, a milder case of pneumonia, but pneumonia nonetheless, and it was stubborn, but thankfully it didn't turn into a real bad case so I was able to overcome it,” Dale said.

He said he was "very well-cared for" in Japan.

“I couldn't have asked for any better care. The team of doctors and nurses that took care of me were absolutely awesome, and I can never thank them enough for the care that I received,” he said.

“We encourage our fellow Americans not to panic -- just be smart, wash your hands often.”