For one night only, "The Live Music Capital of the World," will take on "The City of Screw."

HOUSTON - Two musical greats will go head-to-head in a southern showdown in Houston, and it will certainly be a sight to behold.

Houston's own rap legend Paul Wall will face off against Austin-native and multi-Grammy Award-winning singer/songwriter and guitarist, Gary Clark Jr. for Red Bull SoundClash next Thursday, November 10 at 713 Music Hall. 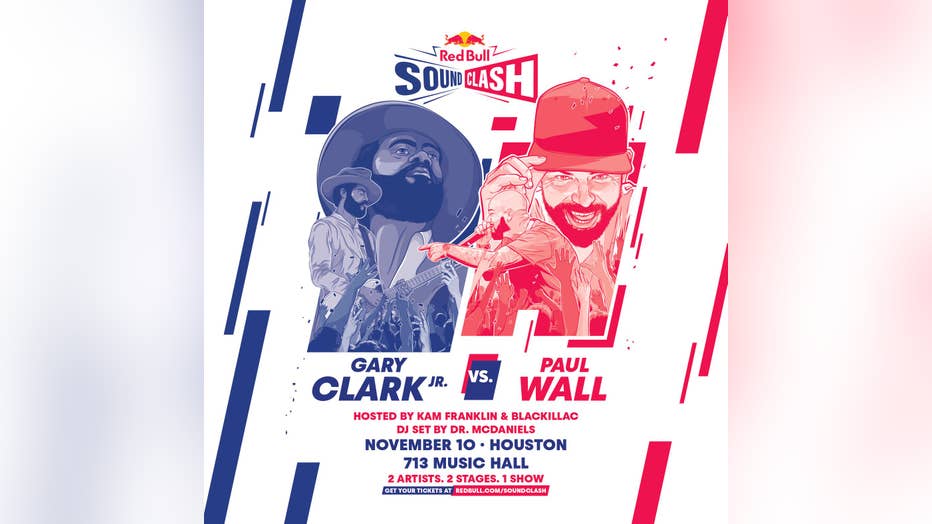 For one night only, Austin, otherwise known as "The Live Music Capital of the World," will take on Houston, also called "The City of Screw", with Houston-native Dr. McDaniels, best known as the DJ for Houston's own rap superstar Don Toliver, as the event's official DJ.

This will be the second show, although highly anticipated, with The People's Champ himself previously hosting for "Queens of Gulf Coast Soul" themed competition in Fall 2021 where Kam Franklin and her band The Suffers went against New Orleans' own Tank and the Bangas.

The roles have switched now, with Franklin taking the reins as host, but the Houston native says she's honored to be a part of it nonetheless.

"It feels incredible to be still just in the mix with two just legendary artists," Franklin said. "I know they're going to be just bringing their absolute best."

Singer/songwriter, activist, poet, and Houston-native Kam Franklin will be hosting this year's competition at 713 Music Hall featuring two musical greats from Texas. This will be her second appearance after she performed at the first event held in Fall 2021.

In fact, the singer/songwriter, activist, and poet adds there was no hesitation when she was asked to host.

"I got the call, and they told me what they were doing and that this year it was going to be Houston versus Austin with Paul taking over the stage part of it, and I was like, ‘absolutely.’" Franklin explained. "I really didn't ask many other questions because they stopped at Paul, and they said that Gary was involved, it just really upped the ante for me, just as a participant."

"I love them both, and I'm very impressed by both of them as artists and as peers and friends," she added. "I just feel very, very honored to be a part of such a wonderful night. And I think it's going to be a lot of fun."

Paul Wall, however, admitted if it's a competition against Gary Clark Jr. he already knows where he falls under.

"I mean, I'm going to be honest, man, if this is a competition I lost," he said chuckling. "He's so cold. And everything he does, man, when he's playing the guitar is so mesmerizing on stage, man. It's just so mesmerizing."

This will be Paul Wall's second appearance at Red Bull SoundClash but this time as a competitor, where he will be going against multi-Grammy Award-winning guitarist, singer/songwriter, and Austin-native, Gary Clark Jr.

Known for hits like "Grillz" and "Sittin' Sidewayz," Paul has enjoyed a decades-long career as a legendary rapper for the Houston area. During an interview, he admitted his dreams were initially to be a DJ and never envisioned his debut rap album "The People's Champ" would go platinum with timeless hits still enjoyed today.

"All the people I looked up to the most were DJs," Paul said. "They were the ones that picked the songs that got played there…it's like they were the leaders of the culture."

For Gary Clark Jr., growing up in Austin it would be almost impossible, he explains, to ignore the musical atmosphere. Listeners of his debut album "Blak and Blu" would agree that exposure to diverse sounds certainly played a role in his own artistry, from tracks like "Bright Lights," "Please Come Home" and "Travis County."

Austin's own Gary Clark Jr. to face off against Houston's Paul Wall in Red Bull SoundClash

Multi-award-winning singer, songwriter, and guitarist Gary Clark Jr. will be paying the city of Houston a visit to compete against rap legend Paul Wall in a true southern showdown at 713 Music Hall.

"It's something very special, and I traveled all over the place and I haven't really noticed it, so widely throughout a city like I have in Austin," he continued. "Some of my fondest memories are going to the park and listening to bands, seeing shows, and things like that."

Of course, Houston has its own deep musical history that is often overlooked compared to Austin. There's a certain uniqueness, however, that gives the city its sound that even Paul Wall is unable to put in words, but understood.

"We're so culturally diverse; there's so many people that are represented throughout the sounds that you hear," Paul Wall said. "When I first came on the scene as a rapper, what I wanted was to be different. I didn't want to sound like everybody. Of course, I have my influences, you know, who my key influences and influenced me. And, you know, you could hear that throughout my music, even still to this day. But I always wanted to take the path that was less traveled."

In essence, the show is more of a collaborative concert experience, where the two groups will "compete against each other" over the course of four rounds, but Red Bull notes it's "ultimately meant to serve as a celebration of the power of live music, collaboration, and creative empowerment."

This is why it was all the more wonderful to hear the kind words shared by Paul echoed by Clark Jr. adding it's all about the music in the end.

"It's the People's Champ," he said, referring to Paul Wall's other nickname. "I mean, just going up against the reputation alone. It's like really coming up short; people aren't calling me that."

"But I'm excited, I mean of course it's a friendly competition, but I'm excited to rock with them," Clark Jr. continued. "I think it's a big thing for Texas, man. I mean, I talk a lot about Texas and representing, but I think it's cool for us to come together and represent on a big stage like this. I think it's good for the music, the culture, and it's going to be fun."

Considering how deep both cities' musical histories are and what both respective artists bring to the table, it's certain to be a powerful experience. Gary Clark Jr.'s hypnotic, but electric strumming on the guitar with his soulful voice along with Paul Wall's rhythmic beats and clever lyrics are certain to attract an array of audiences and diverse listeners.

"I'm excited for the fans to experience just the mix and mash of music," Clark Jr. said. "Just the sounds and the different art forms that come from two places that are so close. I mean, you're going to hear beats in bars and riffs on melodies all coming together on two different stages."

"I mean, I'm a music lover, so I'm excited to see how this whole thing is going to flow," he added. "The look on people's faces, you know, as he's performing, as I'm performing. It's just- I'm looking forward to the shift in energy in the building, just the excitement of things, it's going to be cool."

It would seem ideal then that Houston would be on the same level as Austin in terms of musicality; a sentiment agreed with by Kam Franklin.

"This is a really awesome city," she said. "It's filled with endless amounts of cultural diversity, but you can't really, you know, celebrate that and show that unless you actually live that and present that and show how amazing of a host city we can be for this kind of stuff, not just for sports, but when it comes to art and when it comes to one-night-only music experiences like this one, I hope that we become the city that Red Bull chooses every year."

Doors open for Red Bull SoundClash Houston at 6:30 p.m. Thursday. November 10 at 713 Music Hall on Franklin St. To learn more about the concert experience, visit their website. If you'd also like to purchase tickets, click here.