SURFSIDE, Fla. - The death toll in a Florida collapsed condo tower climbed to 95 on Tuesday as crews continued the painstaking search for victims and personal belongings in the rubble.

Another 14 people remain unaccounted for in the June 24 collapse of the Champlain Towers South in Surfside, located just north of Miami Beach.

Teams on Tuesday continued to dig through broken concrete and twisted rebar for more human remains and sentimental items, hoping to recover lost jewelry, wedding albums and other sentimental items for those grieving the tragic loss of their loved ones. Officials have also set up a database for people to upload information about missing property in an effort to recover keepsakes.

The aunt of two girls, 4 and 11, who were buried in the same coffin last week has been longing for a silver necklace with a pendant shaped like half a heart and the words "Big Sis" inscribed.

The body of 4-year-old Emma Guara was pulled from the rubble still wearing her "Little Sis" necklace and was buried wearing the necklace. But when firefighters found her 11-year-old sister, Lucia Guara, she was not wearing her necklace. Their aunt, Digna Rodriguez, said Lucia had developed an allergic reaction and had temporarily stopped wearing it.

"We would like to get that necklace back," Rodriguez told the Associated Press. "They loved those necklaces."

The girls' parents, Anaely Rodriguez and Marcus Guara, also died in the collapse. 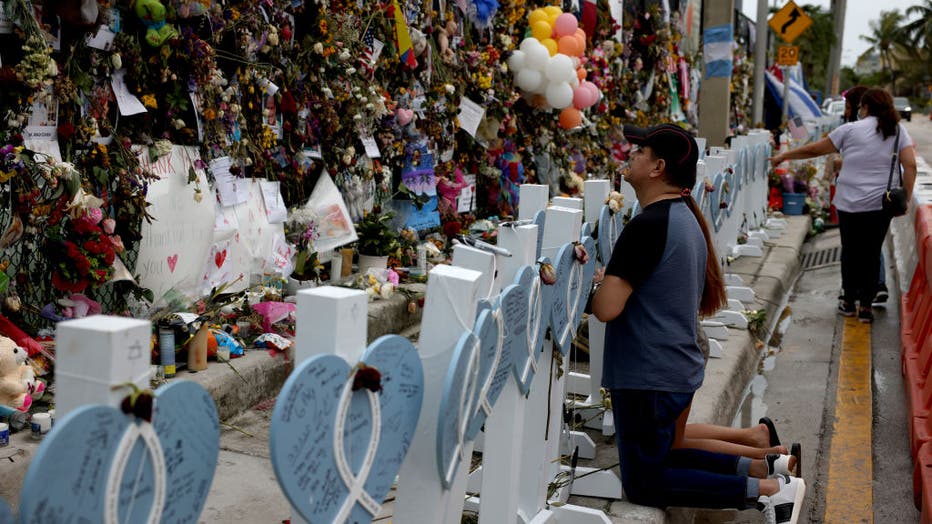 Rachel Spiegel, who lost her 66-year-old mother, Judy Spiegel, said she hopes the crews will find her family’s mementos. Her mother's remains were recovered Friday.

"All my parents’ stuff over a lifetime is gone," Rachel Spiegel said. "Their wedding album is gone. My dad’s wine collection is gone, all my mom’s jewelry, all my mom’s clothes, the dress she wore at my wedding that I wanted to wear one day. All of their belongings are gone. We have nothing."

As crews find personal possessions at the site, each item is photographed and logged using GPS. They have made a grid of the pile, knowing approximately where each family's condo unit should be. Detectives place the objects into a bin. They are taken to an area to be cataloged and sealed in bags. Then they are placed in a locked and guarded cargo container for later shipment to a warehouse.

Miami-Dade Police Director Freddy Ramirez said there will be an "estate process" to claim the possessions of the deceased and make sure those items get to the proper heir.

Surfside Mayor Charles Burkett, who has visited the site repeatedly since the collapse, called the work "so delicate" as crews are finding items as small as rings and jewelry in the rubble. There have also been special considerations taken for any religious property. Rabbis have toured the processing area to ensure that religious artifacts are properly stored and handled with care.

Surfside Mayor Charles Burkett said the condo collapse site has been declared a crime scene in a press conference on the latest recovery efforts on July 13, 2021.

"It could be the smallest little thing that to a common person it just looks like a little container. It really means generations. It’s very spiritual, and I’m just so impressed. Our officers are learning so much about culture," Burkett added. "There are just so many dynamics with the sadness and the sorrow."

"To give you an answer when we feel we’ll recover everyone, I can’t give you an exact date," the fire chief said. "We’re doing everything that we can — everything possible — until we feel that we’ve delayered every floor."

Members of an Israel Defense Forces rescue team were honored by Miami-Dade County and local firefighters on July 10, as they readied to depart Surfside.

The cause of the collapse of the Champlain, which was built in 1981, remains under investigation. Debris removed from the site was being sorted and stored in a warehouse as potential evidence, officials said.

A 2018 engineering report found that the building's ground-floor pool deck was resting on a concrete slab that had "major structural damage" and needed extensive repairs. The report also found "abundant cracking" of concrete columns, beams and walls in the parking garage.

Authorities are launching a grand jury investigation into the collapse and at least six lawsuits have been filed by Champlain Towers families.