FOX 26’s Gabby Hart has been digging into accusations made of racist messages sent to a patient by a chiropractor. She tells us what happened after confronting him at his office.

HOUSTON - Dr. Karim Eissa is a Chiropractor with LifeCare Spine and Joint Clinics. One of his patients, Chaz Simmons claims that he sent racist and demeaning messages to him.

He shared screenshots of those messages with FOX 26. 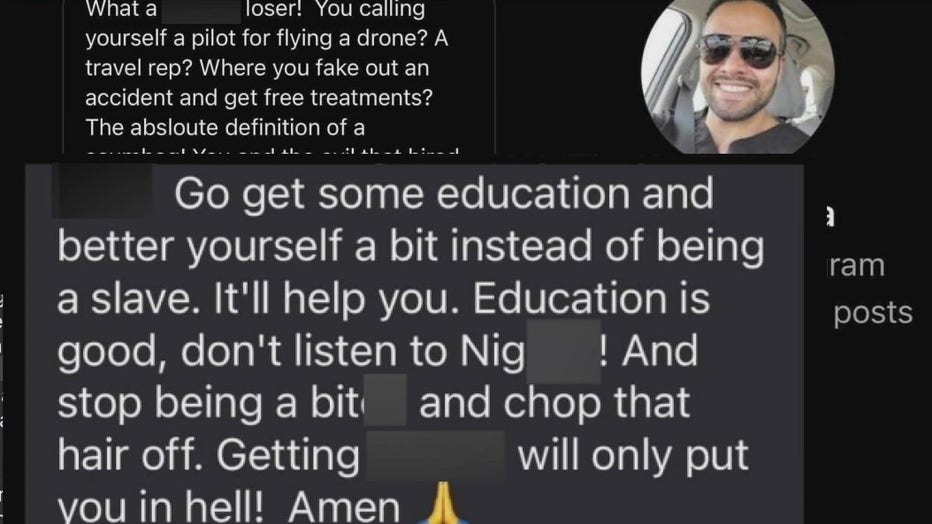 FOX 26 stopped by Dr. Eissa's office on Thursday afternoon, but she was initially asked to leave.

While waiting for the elevator, Dr. Eissa poked his head out and decided to answer some questions.

"This isn't a race problem, it's a scumbag problem," he said.

When asked if he sent the messages he said, "it doesn't matter, I don't know,"

Simmons got into a car accident in March of this year, his personal injury attorney sent him to Dr. Eissa's office for several treatments.

ACROSS TEXAS: Plano woman who went on racist tirade against Indians sued by victim

As far as he was concerned, everything was supposed to be taken care of by his lawyer's office, but he says one-day Dr. Eissa texted him saying he wasn't working with his lawyer anymore and demanded that Simmons pay him directly or provide his insurance info.

His lawyer says that in order to pay Dr. Eissa they needed him to release Chaz's medical records, something they claim he refuses to do until he gets paid.

"I just needed my medical records, so I could continue my case and go ahead and close the case out," Simmons explained.

MORE STORIES OUT OF HOUSTON

Simmons went to doctor Eissa's office and tried to get those medical records so they could settle his case, but he says Dr. Eissa told him to get out.

After that encounter is when Simmons says those racist text messages started rolling in. He showed FOX 26 his phone and the exact number some of those messages came from, so we called it and Dr. Eissa answered, during that conversation he seemingly admitted to making some of those remarks.

"Yes, this is my number, and when I say slave it has nothing to do with the color," Dr. Eissa said.

FOX 26 reached out to Terry Bryant, a prominent personal injury attorney in Houston, who says it's very common for an attorney to arrange treatment for a client and then pay the medical provider from the lawsuit settlement.

He says what is unusual, however, is a provider requesting payment before medical records are released because those records are needed for a settlement to happen.

RELATED: 'We're all in this together,' Houston mayor speaks out against anti-Asian discrimination

As of Thursday evening, Simmon's records have still not been released, meaning he and his lawyer can't move forward with their case.

FOX 26 will continue to make updates to this developing story as more information becomes available.