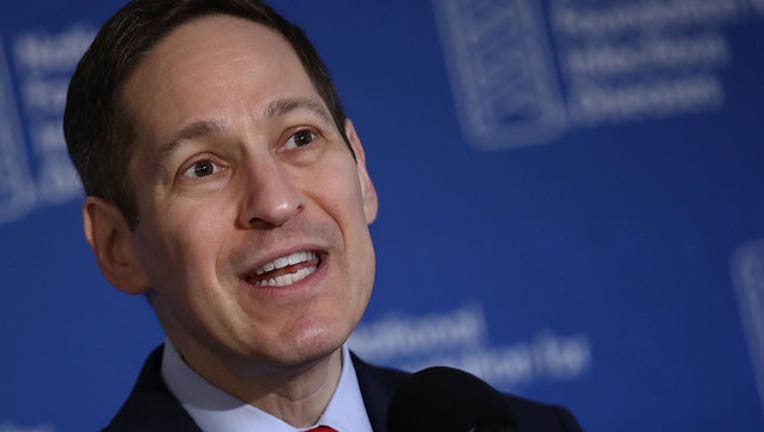 NEW YORK (AP) — One of the nation's most respected medical experts, who led the U.S. Centers for Disease Control and Prevention, entered a courtroom on Friday in handcuffs, arrested on sexual-harassment charges after a woman accused him of grabbing her behind late one night last year.

Dr. Thomas Frieden, who for years informed the public about dangers to their health, sat stone-faced as a judge warned him not to approach the woman, who accused him of groping her on Oct. 20, 2017, in his Brooklyn home.

Frieden, who also is a former New York City health commissioner, was arrested earlier Friday on three charges: forcible touching, sex abuse and harassment. His attorney, Laura Brevetti, entered a not guilty plea on his behalf.

The 55-year-old accuser, who knew Frieden, reported the encounter in July, and he was taken into custody after an investigation.

The judge ordered Frieden to refrain from any contact with the woman and to surrender his U.S. passport. Frieden was freed on his own recognizance, leaving in a car with his attorney. His next court appearance is Oct. 11.

Frieden leads a health initiative called Resolve to Save Lives, which is housed by nonprofit global health organization Vital Strategies.

"The allegation does not reflect Dr. Frieden's public or private behavior or his values over a lifetime of service to improve health around the world," said a statement issued by a spokesman on his behalf.

The president of Vital Strategies, Jose L. Castro, came out in support of Frieden. He said Frieden informed him in April that "a non-work-related friend of his and his family of more than 30 years accused him of inappropriate physical contact."

"I have known and worked closely with Dr. Frieden for nearly 30 years and have seen first-hand that he has the highest ethical standards both personally and professionally," Castro said in a statement. "In all of my experiences with him, there have never been any concerns or reports of inappropriate conduct."

Nonetheless, earlier this month Vital Strategies hired an investigator to interview Resolve to Save Lives employees even though the woman didn't work there. Castro said the investigation found no inappropriate workplace behavior.

"Vital Strategies greatly values the work Dr. Frieden does to advance public health and he has my full confidence," Castro said.

Frieden was a disease investigator at the Atlanta-based CDC, the nation's top public health agency, in 1990 when he was assigned to New York City and worked on a large outbreak of drug-resistant tuberculosis. He stayed, taking a job heading the city's tuberculosis control.

In 1996, he began working in India with the World Health Organization on tuberculosis control.

Frieden became New York City's health commissioner in 2002 and was known for his aggressive measures to attack chronic diseases. In 2003, New York banned smoking in almost all workplaces, a precedent-setting move that inspired other cities to do the same. In 2006, it became the first U.S. city to ban restaurants from using artificial trans fats and required hundreds of eateries to post calorie counts on their menus.

Frieden was CDC director until January 2017, when he resigned as part of the turnover to President Donald Trump's administration.

In September 2017, Frieden announced he had moved back to New York City to head the $225 million Resolve to Save Lives initiative.

Associated Press writers Kiley Armstrong and Mike Stobbe in New York and Colleen Long in Washington contributed to this report.