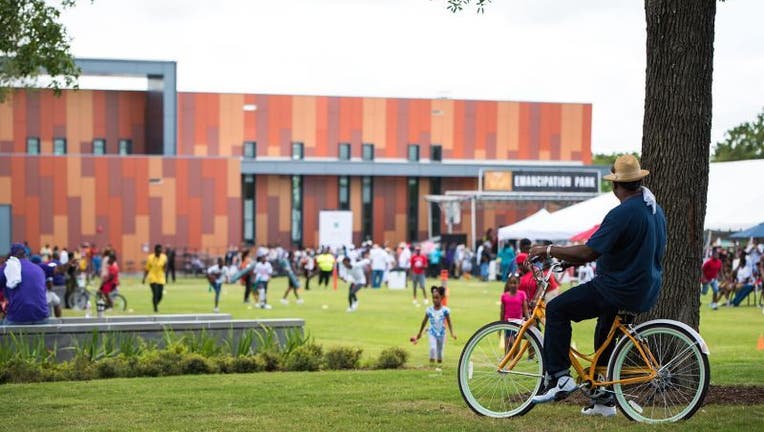 HOUSTON - A major donation during the Juneteenth celebration at Emancipation Park has brought even more joy to the event!

Baker Hughes made the announcement on Saturday, marking the third consecutive year the company has made a charitable gift to the EPC. The grant was announced during EPC’s annual Juneteenth celebration event.

The funds will support the conservancy’s mission to preserve the park’s integrity and enrich its heritage as a local, state, national and international landmark.

Emancipation Park, established in 1872 in Houston’s Third Ward, is the oldest public park in Texas. It was purchased by a group of African-American community leaders for one of the nation’s original Juneteenth celebrations.

Then in 1916, it was donated to the city of Houston and remained the only public park open to Black residents for more than 20 years.

RELATED: For more than 150 years, African Americans have celebrated independence on Juneteenth

Today, the park is home to a variety of events, programs and services available to the community such as financial literacy classes, youth STEM programs, and Emancipation Conversations that cover a variety of topics that affect African Americans in Houston and beyond.

The story of Emancipation Park

In 1872 recently freed African American community leaders pooled their resources and bought a parcel of land that became Emancipation Park. Jose Grinan shares the long history of the park and its role in the community and Juneteenth celebrations today.

"We are donating our resources to Emancipation Park Conservancy because of its historical significance and, importantly, how it is helping build a more inclusive city and a better world," "Lorenzo Simonelli, chairman and CEO of Baker Hughes. "I am proud to attend today’s ceremony, and we are proud to be a part of today’s activities."

"We are delighted to partner with The Baker Hughes Foundation, and we appreciate their generous financial contribution, time and talent," said Dr. Muhammad Abdur-Rashid, interim executive director of Emancipation Park Conservancy. "A partnership like this is vital as we continue our mission to support the Third Ward and Houston community with services, resources and programs during these unprecedented times."