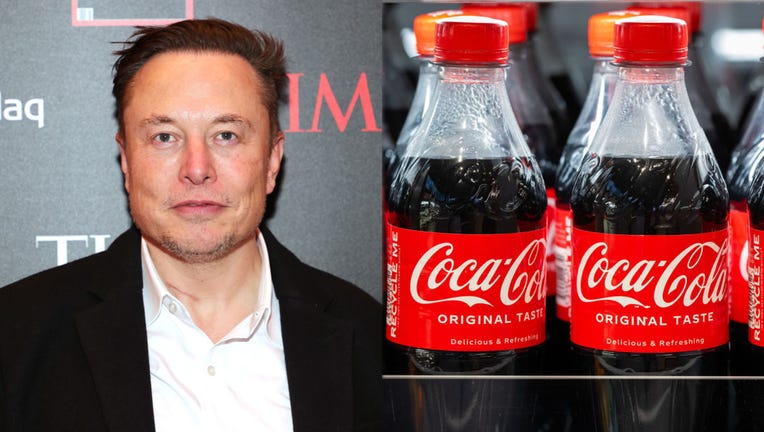 Elon Musk is pictured in a file image attending TIME Person of the Year on Dec. 13, 2021, in New York City, alongside bottles of Coca-Cola on sale at a supermarket in an image dated Jan. 10, 2022, in Cardiff, Wales. (Photo by Theo Wargo/Getty Images

Elon Musk, fresh off of his successful $44 billion bid to buy Twitter, used the platform to joke about a potential new takeover: Coca-Cola.

"Next I’m buying Coca-Cola to put the cocaine back in," the Tesla and SpaceX CEO quipped on Twitter, referring to the drink’s original formula which contained cocaine in the form of an extract of the coca leaf — inspiring the "Coca" part of the beverage’s name.

A Twitter user responded to Musk’s tweet by sharing a photo of an early Coca-Cola bottle and noting the cocaine ingredient. "Bring it back," the user added.

When did Coca-Cola take cocaine out of its formula?

Coca-Cola’s original recipe contained cocaine and its history has been well-documented, according to the National Institute on Drug Abuse. It was invented in 1885 by John Pemberton, a pharmacist from Atlanta who made the original recipe in his backyard.

At the time, cocaine was legal and a common ingredient in medicines with many believing it was safe to use in small amounts, according to the institute.

"Pemberton described the drink as a ‘brain tonic and intellectual beverage,’ and advertised it as a ‘patent medicine.’ He claimed it cured headaches, upset stomach, and fatigue," the institute said.

It added that during the 19th century, such patent medicines weren’t yet regulated and anyone could claim health benefits of their product without having to prove the effectiveness or reveal the risks.

"The amount of cocaine in Coca-Cola was reduced over time, and finally eliminated from the drink by 1929," according to the institute, noting how this came during the Prohibition Era in the U.S. when alcohol was illegal. Coke soon became popular as a "soft" drink, an alternative to hard alcohol.

Tesla CEO Elon Musk has entered into a definitive agreement to buy Twitter Inc. and hopes to turn it into a privatized company.

Musk followed up the Coca-Cola tweet with what appeared to be a doctored photo of him promising on Twitter, "Now I'm going to buy McDonald's and fix all of the ice cream machines…"

"Listen, I can't do miracles ok," Musk joked in response to the suggestion.

Musk’s acquisition of Twitter was announced on Monday, generating somewhat of a mixed response from users.

The world’s richest man has said he aims to turn the social media company into a haven for "free speech" — a commitment that’s been celebrated on the political right and among followers of former President Donald Trump, whose account last year was permanently banned.

"Free speech is the bedrock of a functioning democracy, and Twitter is the digital town square where matters vital to the future of humanity are debated," Musk said in a statement. "I also want to make Twitter better than ever by enhancing the product with new features, making the algorithms open source to increase trust, defeating the spam bots, and authenticating all humans."

"Twitter has tremendous potential – I look forward to working with the company and the community of users to unlock it," Musk added.

But a more hands-off approach to content moderation that Musk envisions has also left many other users concerned that the platform will reanimate accounts that propagated dangerous conspiracies and harassment.

Musk received an endorsement from Twitter co-founder and former CEO Jack Dorsey, who praised his decision to take Twitter " back from Wall Street" and tweeted that he trusts Musk’s mission to " extend the light of consciousness " — a reference to Dorsey’s notion that "Twitter is the closest thing we have to a global consciousness."

RELATED: Everything Elon Musk wants to change about Twitter