A "quick-hitting and fast-moving" winter storm was set to slam the Mid-Atlantic U.S. on Monday with heavy snow, which could lead to dangerous driving conditions, power outages and more flight cancelations nationwide.

The National Weather Service said the rain would change over to snow across much of the Central and Southern Appalachians and Mid-Atlantic regions in the morning as temperatures dipped to below freezing.

Several inches of snow was forecasted to land from the Southern Appalachians through Washington, D.C. and into southern New Jersey by Monday evening, the weather agency said. Six to 11 inches ringed the area around Washington, closing government offices and schools and grounding the president's helicopter. 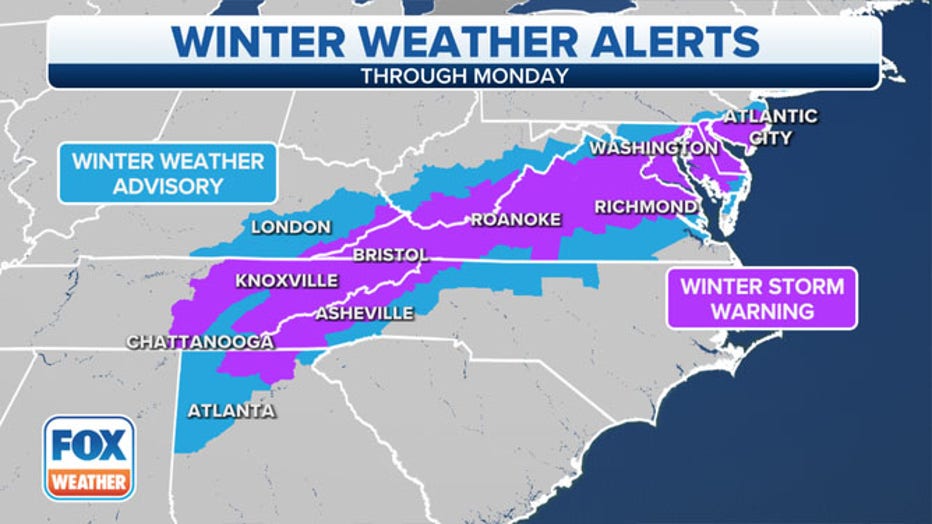 Winter weather alerts are posted from the southern and central Appalachians to the mid-Atlantic on Monday, Jan. 3, 2022. (Credit: FOX Weather)

The heavy snowfall, coupled with closings caused by the surge in COVID-19 cases, forced much of Washington to shut down. Four of the Smithsonian museums had already closed in late December due to a COVID-19 outbreak, and the National Zoo announced Monday that it would close for the day because of the snow.

Strong wind gusts and snow falling at a rate of 1 to 2 inches (2.5 to 5 centimeters) per hour made travel treacherous. In Virginia, state police responded to more than 500 traffic accidents, including a crash involving six tractor-trailers. State police said no injuries were reported in the crash.

The mayor of Washington declared a snow emergency ahead of Monday's snowstorm.

Snow falls at US Capitol as storm sweeps eastern US states

New Jersey Gov. Phil Murphy on Sunday also issued a State of Emergency for five counties ahead of the winter storm. Murphy noted how the announcement was made early because Monday is "one of the biggest ‘back to work,' ‘back to school’ days of the entire year."

Meanwhile, scattered showers and thunderstorms were forecast across the Carolinas and down into Florida. The NWS said much of coastal North Carolina faced a slight risk of severe thunderstorms on Monday.

"Damaging winds and a few tornadoes appear to be the main concerns with this severe weather threat," it said.

More than half a million power outages were reported across portions of the Southeast on Monday afternoon, including customers in Georgia, Tennessee and the Carolinas, according to PowerOutage.us.

A 7-year-old girl died Monday morning when a tree fell on a cabin in East Tennessee near the Smoky Mountains, Blount County Sheriff’s Office spokeswoman Marian O’Briant said. She said numerous trees and power lines were down all over Blount County after heavy, wet snow fell overnight. No one else was injured. Officials did not release additional information.

The start of the New Year also brought some rare snowfall to the Florida Panhandle after a cold front swept through the state. As much as 6 inches (15 centimeters) of snow also accumulated in north Alabama, where authorities reported multiple roads were blocked because of icy spots and wrecks.

The winter weather, combined with the pandemic, led to thousands of flights being delayed or canceled across the country. According to tracking service FlightAware, more than 2,600 U.S. flights and more than 4,100 worldwide were grounded as of midday Monday.