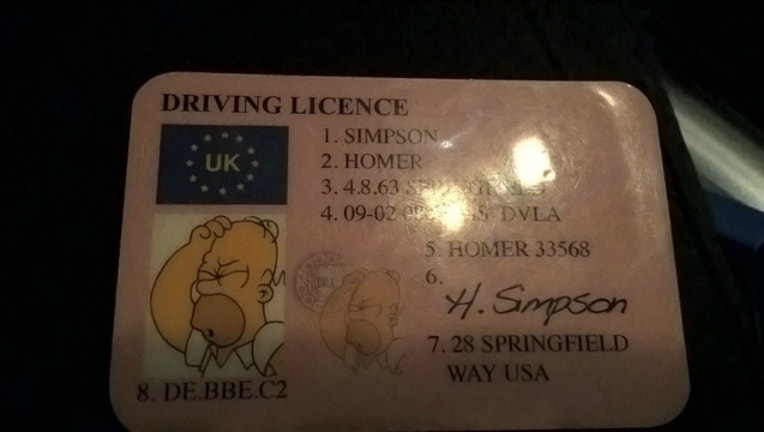 FOX NEWS - Homer Simpson has done a lot of stupid stuff over the years, but even he would think twice about this daring con involving his visage. An unidentified driver in England attempted to pass off Homer’s license as his own.

According to the Thames Valley police, one of their officers stopped a driver in Milton Keynes for a traffic infraction. The officer followed standard procedure and asked the driver for a driver’s license. When she did, the driver handed her a fake license featuring Homer Simpson’s name and, in perhaps the boldest part of the whole con, an animated picture of the character making his famous “D’oh!” face. The image, which wouldn’t even fool Chief Clancy Wiggum, can be seen below.

In a tweet sharing the odd encounter with followers, the department noted that the driver’s car was seized and he was reported for driving with no insurance and driving without a proper license.

As many die hard fans of “The Simpsons” will note, the license was a less-than-perfect counterfeit for many obvious reasons, as well as some more subtle ones. For starters, Homer Simpson’s home address is incorrect. As most fans know, the Simpson residence is located at 742 Evergreen Terrace in Springfield. Additionally, Homer’s date of birth appears to be wrong, according to a report from Mashable in 2016. However, the person may get a pass on that as homer tends to be ageless in order to maintain the show’s longevity.