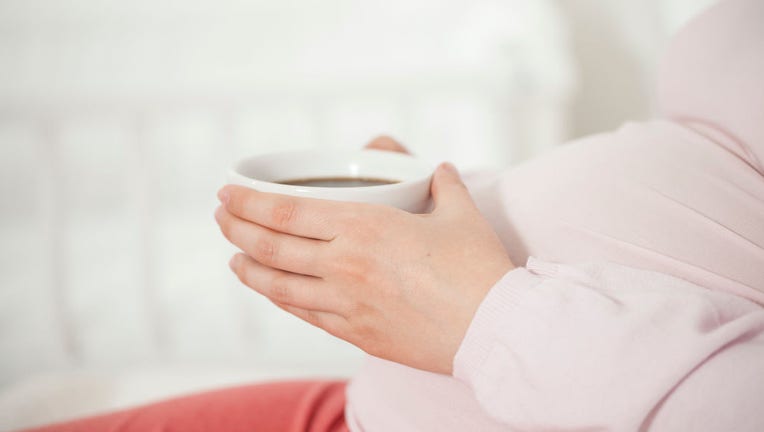 FILE - A pregnant woman holds a cup of coffee in an undated file image. (Photo by Bildquelleullstein bild via Getty Images)

Even a little bit of caffeine consumption while pregnant may have an impact on a child’s height, according to a recently-published analysis by researchers at the National Institutes of Health.

Pregnancy comes with all sorts of recommendations on what to avoid. It’s known that high caffeine can be harmful to a baby in the womb. And specifically, when it comes to moderate caffeine consumption, the advice seems to be across the board.

The American College of Obstetricians and Gynecologists recommends that pregnant women limit their caffeine intake to less than 200 milligrams per day — the equivalent of about two, 6-ounce cups of coffee.

Previous research has linked moderate coffee consumption during pregnancy to low birth weight and other poor birth outcomes, while others have found no such risks.

The new study, published Monday in the Journal of the American Medical Association (JAMA), found that children of women with low caffeine intake during pregnancy were slightly shorter, on average, compared to children born to women who completely avoided caffeine in pregnancy.

The gaps in height were observed at age 4 and persisted through at least age 8, researchers said.

The findings were reported even in the children of pregnant women who consumed less than 50 mg of caffeine per day on average — well below the current guidelines.

"Our findings suggest that even low caffeine intake during pregnancy can have long-term effects on child growth," said Dr. Katherine Grantz, a study author. "Importantly, the height differences we observed are small—less than an inch—and further research is needed to determine if these differences have any effects on child health."

Woman gets pregnant while already being pregnant

The team, led by Grantz and Dr. Jessica Gleason of the Division of Population Health Research at NIH’s Eunice Kennedy Shriver National Institute of Child Health and Human Development, analyzed concentrations of caffeine and its breakdown product paraxanthine in blood samples collected from more than 2,400 pregnant women in two previous studies.

They looked for correlations between maternal caffeine consumption and child height, weight, body mass index and obesity risk. They also accounted for several other factors that could affect child growth, such as maternal height, pre-pregnancy weight and smoking.

In one study of 788 children, those born to women who consumed the greatest amounts of caffeine were an average of 1.5 centimeters (or 0.59 inches) shorter than those whose mothers had the lowest caffeine intake. On average, pregnant women in the study consumed less than 50 mg per day of caffeine.

In the second study that the team analyzed, children who participated in a study in the 1960s and 1970s were measured at regular intervals from birth to age 8, allowing researchers to track changes in height over time.

Beginning at age 4, children of women who consumed the highest amounts of caffeine measured shorter than those born to women in the lowest caffeine-consumption group. This gap increased from 0.68 cm (0.27 inches) at age 4 to 2.2 cm (0.87 inches) at age 8, the researchers said. In this study, caffeine consumption among pregnant participants averaged around 200 mg per day.

The study was observational, meaning it can’t prove that one thing causes another — only that they are linked.

"The correlation observed in this study can be explained by the existence of a common cause of both caffeine consumption and growth restriction e.g., poverty, stress, and dietary factors," said Dr. Gavin Pereira, a professor of epidemiology and biostatistics at Curtin University in Australia. Pereira was not involved in the study.

Dr. Manijeh Kamyar, who has served as a member of the American College of Obstetricians and Gynecologists’ task force for Your Pregnancy and Childbirth: Month to Month, said the data in the study "was not vigorous enough and does not demonstrate enough of a difference" to change how she counsels patients.

"The difference in height between groups who had lowest and highest caffeine intake was approximately 1.5 cm, which is not clinically significant," Kamyar said in a statement to FOX Television Stations.

Kamyar, who previously served as a member of ACOG’s Patient Education Review Panel, also noted several flaws in the study — saying the authors only measured caffeine intake during the first trimester and not throughout the pregnancy.

"Additionally, the lack of paternal data is a huge flaw. Paternal height influences height as much as maternal height, and the study authors were unable to adjust for that," Kamyar said. "Overall, I would not be presenting this data to my patients as proof that caffeine intake causes shorter stature in exposed offspring."

Scientists say coffee might be good for your bones

A recent study shows there may be a positive link between coffee consumption and bone health.

Dr. Alex Polyakov, a clinical associate professor and obstetrician, gynecologist, and fertility specialist based in Melbourne noted how caffeine is present in low amounts in other beverages and foods, apart from coffee, so complete avoidance is possible — but may be difficult to achieve.

Polyakov was also not involved in the research.

"A healthy balanced diet is the best possible strategy and a small amount of coffee is rather unlikely to result in significant harm to either a pregnant person, or the offspring, notwithstanding the findings of this study," Polyakov said in a statement.

"Advice to unnecessarily restrict pregnant women’s diets may in fact be counterproductive and create anxiety and the feeling of guilt should women not be able to adhere to them," Polyakov continued. "The bottom line is that if one’s well-being is enhanced by having a cup of coffee, there is most likely no harm in having it."