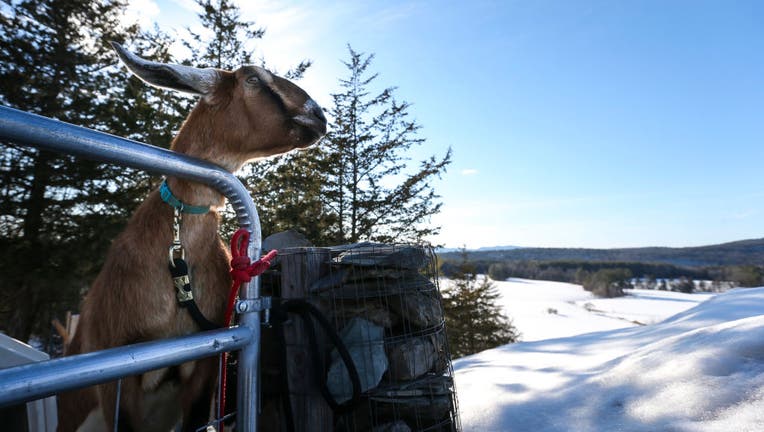 FILE: Lincoln, the three-year-old goat who was sworn in as the mayor of Fair Haven, VT, is pictured on March 12, 2019. (Photo by Nathan Klima for The Boston Globe via Getty Images)

FAIR HAVEN, Vt. - A goat and a dog who were each elected mayor have helped raise money to renovate a Vermont community playground.

The oddball idea of pet mayor elections to raise money to rehabilitate the playground and to help get local kids civically involved came from a local town manager.

In 2018, Fair Haven residents elected Lincoln the goat as its honorary mayor. Lincoln helped raise about $10,000 while the current mayor, Murfee, a Cavalier King Charles spaniel, has raised $20,000, Town Manager Joe Gunter told the Rutland Herald. The town chipped in another $20,000.

Murfee’s owner, Linda Barker, said that when she was talked into having Murfee get involved in politics, she thought it would be easy to raise money through T-shirts. Then the pandemic struck.

So she shifted to masks. She’s made nearly 1,000 of them, and will be making another round of them for Valentine’s Day. She raised more than $5,000 from the masks and a similar amount from basket raffles.

The town was also recently awarded a $50,000 grant from the federal Land and Water Conservation Fund, she said.

Ironically, the honorary mayor is not welcome on the playground. Barker said there’s a "no dogs allowed" sign.

"Murfee is going to take that up with the town," Barker said Sunday with a chuckle. "He’s going to contest that."

CLICK HERE FOR MORE STORIES ON PETS AND ANIMALS