UN climate report says world to get sicker, more dangerous in next 18 years

A U.N. panel published a new report on Feb. 28, 2022, summarizing the latest information on global warming and its effect on people.

BERLIN - Temperatures on Earth will shoot past a key danger point unless greenhouse gas emissions fall faster than countries have committed, the world’s top body of climate scientists said Monday, warning of the consequences of inaction but also noting hopeful signs of progress.

U.N. Secretary-General Antonio Guterres said the report by the Intergovernmental Panel on Climate Change revealed "a litany of broken climate promises" by governments and corporations, accusing them of stoking global warming by clinging to harmful fossil fuels.

"It is a file of shame, cataloguing the empty pledges that put us firmly on track toward an unlivable world," he said.

Governments agreed in the 2015 Paris accord to keep global warming well below 2 degrees Celsius (3.6 Fahrenheit) this century, ideally no more than 1.5 degrees Celsius (2.7 Fahrenheit). Yet temperatures have already increased by over 1.1C (2F) since pre-industrial times, resulting in measurable increases in disasters such flash floods, extreme heat, more intense hurricanes and longer-burning wildfires, putting human lives in danger and costing governments hundreds of billions of dollars to confront.

"Projected global emissions from (national pledges) place limiting global warming to 1.5C beyond reach and make it harder after 2030 to limit warming to 2C," the panel said.

In other words, the report’s co-chair, James Skea of Imperial College London, told The Associated Press: "If we continue acting as we are now, we’re not even going to limit warming to 2 degrees, never mind 1.5 degrees." 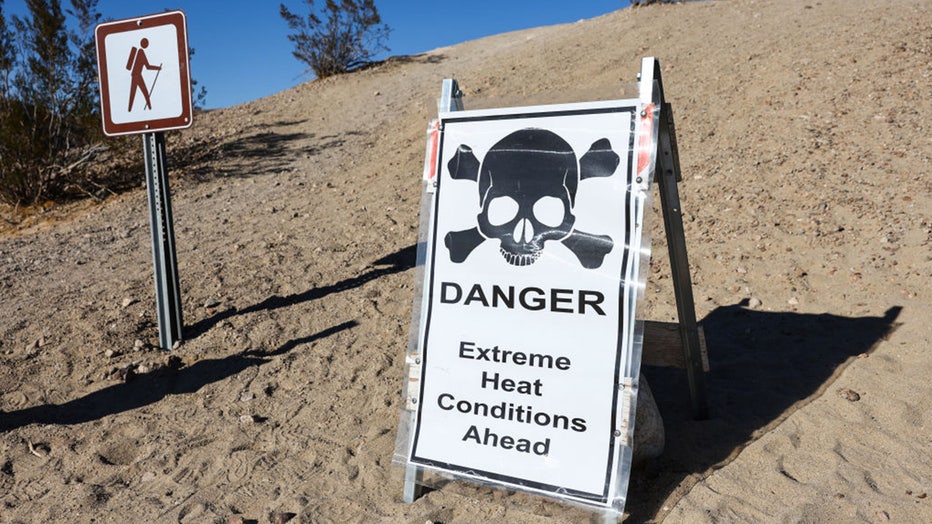 FILE - A sign reads "Danger Extreme Heat Conditions Ahead" in Anza-Borrego Desert State Park, which is threatened by climate change, on March 23, 2022 near Borrego Springs, California.

Ongoing investments in fossil fuel infrastructure and clearing large swaths of forest for agriculture undermine the massive curbs in emissions needed to meet the Paris goal, the report found.

The rate of growth has slowed from 2.1% per year in the early part of this century to 1.3% per year between 2010 and 2019, the report’s authors said. But they voiced "high confidence" that unless countries step up their efforts to cut greenhouse gas emissions, the planet will on average be 2.4C to 3.5C (4.3 to 6.3F) warmer by the end of the century — a level experts say is sure to cause severe impacts for much of the world’s population.

"Limiting warming to 1.5C requires global greenhouse gas emissions to peak before 2025 at the latest and be reduced by 43% by 2030," he said.

Such cuts would be hard to achieve without drastic, economy-wide measures, the panel acknowledged. It's more likely that the world will pass 1.5C and efforts will then need to be made to bring temperatures back down again, including by removing vast amounts of carbon dioxide — the main greenhouse gas — from the atmosphere.

Many experts say this is unfeasible with current technologies, and even if it could be done it would be far costlier than preventing the emissions in the first place.

The report, numbering thousands of pages, doesn’t single out individual countries for blame. But the figures show much of the carbon dioxide already in the atmosphere was released by rich countries that were the first to burn coal, oil and gas beginning with the industrial revolution.

The U.N. panel said 40% of emissions since then came from Europe and North America. Just over 12% can be attributed to East Asia, which includes China. But China took over the position as world’s top emissions polluter from the United States in the mid-2000s.

Many countries and companies have used recent climate meetings to paint rosy pictures of their emissions-cutting efforts, while continuing to invest in fossil fuels and other polluting activities, Guterres charged.

"Some government and business leaders are saying one thing but doing another," he said. "Simply put, they are lying. And the results will be catastrophic."

The report isn’t without some hope, however.

Its authors highlight myriad ways in which the world can be brought back on track to 2C or even, with great effort, return to 1.5C after that threshold has been passed. This could require measures such as the removal of CO2 from the atmosphere with natural or artificial means, but also potentially risky technologies such as pumping aerosols into the sky to reflect sunlight.

Among the solutions recommended are a rapid shift away from fossil fuels toward renewable energy such as increasingly cheap solar and wind power, the electrification of transport, less meat consumption, more efficient use of resources and massive financial support for poor countries unable to pay for such measures without help.

The situation is as if humanity has "gone to the doctor in a very unhealthy condition," and the doctor is saying "you need to change, it’s a radical change. If you don’t you’re in trouble," said report co-author Pete Smith, a professor of soils and global change at the University Aberdeen.

"It’s not like a diet," Smith said. "It is a fundamental lifestyle change. It’s changing what you eat, how much you eat and get on a more active lifestyle."

One move often described as "low-hanging fruit" by scientists is to plug methane leaks from mines, wells and landfills that release the potent but short-lived greenhouse gas into the atmosphere. A pact forged between the United States and China at last year’s U.N. climate conference in Glasgow aims to do just that.

"The big message we’ve got (is that) human activities got us into this problem and human agency can actually get us out of it again," said Skea, the panel's co-chair.

The panel’s reports have become increasingly blunt since the first one was published in 1990, and the latest may be the last before the planet passes 1.5C of warming, Skea told the AP.

Last August, it said climate change caused by humans was "an established fact" and warned that some effects of global warming are already inevitable. In late February, the panel published a report that outlined how further temperature increases will multiply the risk of floods, storms, drought and heat waves worldwide.

Still, the British government’s former chief science adviser David King, who wasn’t involved in writing the report, said there are too optimistic assumptions about how much CO2 the world can afford to emit.

"We don’t actually have a remaining carbon budget to burn," said King, who now chairs the Climate Crisis Advisory Group.

"It’s just the reverse. We’ve already done too much in the way of putting greenhouse gases up there," he said, arguing that the IPCC's calculation omits new risks and potentially self-reinforcing effects already happening, such as the increased absorption of heat into the oceans from sea ice loss and the release of methane as permafrost melts.

Such warnings were echoed by U.N. chief Guterres, citing scientists' warnings that the planet is moving "perilously close to tipping points that could lead to cascading and irreversible climate impacts."

"But high-emitting governments and corporations are not just turning a blind eye; they are adding fuel to the flames," he said, calling for an end to further coal, oil and gas extraction. "Investing in new fossil fuels infrastructure is moral and economic madness."

Vulnerable nations said the report showed big polluters have to step up their efforts before the next U.N. climate summit in Egypt this fall.

"We are looking to the G-20, to the world’s biggest emitters, to set ambitious targets ahead of COP27, and to reach those targets – by investing in renewables, cutting out coal and fossil fuel subsidies," said Tina Stege, climate envoy for the Marshall Islands. "It’s long past time to deliver on promises made."