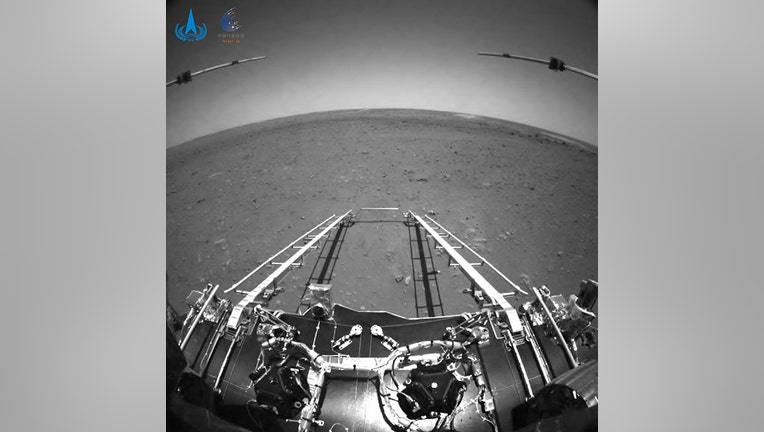 An image of Mars captured by China's Zhurong rover. (CNSA via Storyful)

China's Tianwen-1 spacecraft arrived in orbit around Mars in February after a 6 1/2-month journey from Earth. After months of observation and preparation, a landing vehicle carrying the rover touched down in Utopia Planitia, a lava plain on the planet's northern hemisphere, on Saturday.

The first photograph, a black and white image, was taken by the rover's front "obstacle-avoidance camera" and shows the lander's extended ramp leading to the surface of the planet.

"The terrain of the rover's forward direction is clearly visible in the image, and the horizon of Mars appears curved due to the wide-angle lens," CNSA said in a statement. 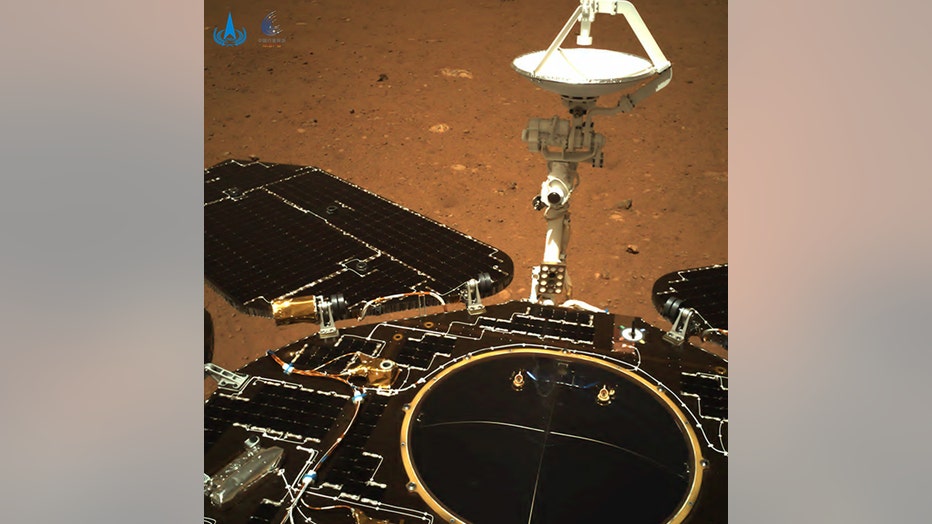 An image of Mars captured by China's Zhurong rover. (CNSA via Storyful)

The second photo, which is in color, was taken by the navigation camera fitted to the rear of the rover.

"The rover's solar panels and antenna are seen unfolded, and the red soil and rocks on the Martian surface are clearly visible in the image," CNSA said.

Blood Moon lunar eclipse 2021: Where and when to watch

"Together with the global science community, I look forward to the important contributions this mission will make to humanity's understanding of the Red Planet," Zurbuchen tweeted.

"Such a challenging attempt is characterized by a succession of complex activities that must be conducted completely by the spacecraft within a very short period of time," Yan said in a statement. "What added to the difficulties was that we don't know much about the Martian atmosphere, which brought a lot of uncertainties to the mission."

In a letter, China's President Xi Jinping thanked everyone involved in the mission.

"Thanks to your courage in the face of challenges and pursuit of excellence, China is now among the leading countries in planetary exploration," Xi wrote in the letter. "The country and people will always remember your outstanding achievements."

China defends how it handled the rocket falling to Earth

The rover, named after the Chinese god of fire Zhurong, is expected to be deployed for 90 days to search for evidence of life. About the size of a small car, the rover has ground-penetrating radar, a laser, and sensors to gauge the atmosphere and magnetic sphere.

With Storyful and The Associated Press.