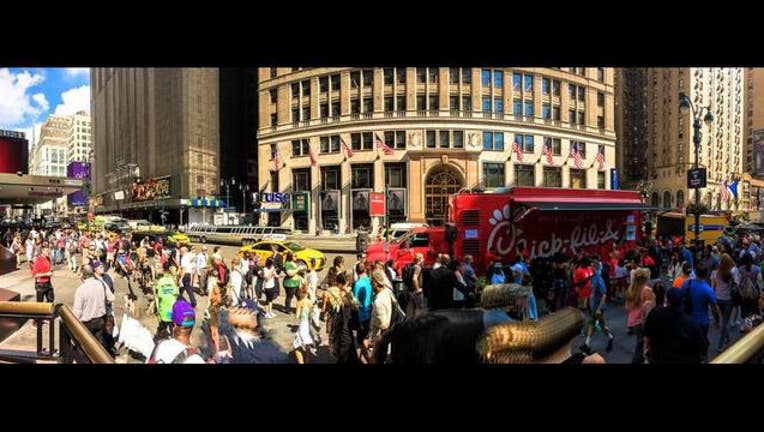 NEW YORK CITY - New York City is getting invaded by (a taste of) The South.

Atlanta-based Chick-fil-A is introducing the City that Never Sleeps to a taste that won't quit, but is closed on Sundays.

Chick-fil-A announced earlier this month its plans to open its first freestanding restaurant in the big apple. This Chick-fil-A will be huge with 3-stories and about 5,000 square feet! It will be the biggest franchise location in the country.

To get New Yorkers ready for the October 3rd opening, they gave away close to 7,000 sandwiches this week.

Chick-fil-A employed bike messengers to spread the word about the giveaway.

And even though Chick-fil-A is moving into New York City’s Garment District in Lower Manhattan, it hasn't lost its southern grace and hospitality.

And as more New Yorkers discover the new Chick-fil-A, they seem to be saying the same thing as those who grew up with the franchise.

More than 30 team members helped prepare the fresh sandwiches for several hours on Tuesday and Wednesday.

In addition to the free food, 4,000 lucky New Yorkers got a mini stuffed cow (also lovingly referred to a as a "mini moo").