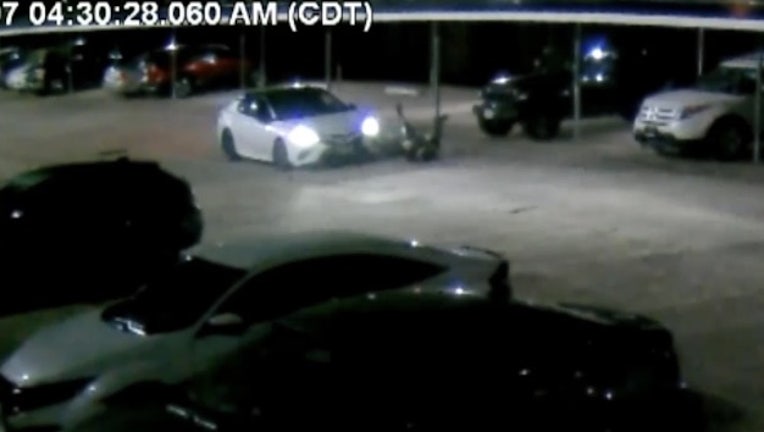 HOUSTON - Houston Police is asking for the public's help in identifying the suspects who carjacked a man and then almost ran him over in west Houston.

HPD says the aggravated robbery happened on Saturday, May 7 around 4:30 a.m. in the 9800 block of Richmond Ave. and was caught on surveillance video.

The victim had just parked and exited his car at his apartment complex parking lot, when three unknown males got out of a white Toyota Camry and approached him.

Moments later, the men started to attack him by kicking and punching him multiple times. The suspects went through his pockets and removed his wallet, keys and cell phone.

Two of the suspects then ran back to the white Toyota Camry as the third suspect got into the complainant’s vehicle and drove towards a dead end in the apartment complex.

The complainant then fell off the hood and the suspects drove out of the apartment complex.

Then on May 11, Houston Police officers located the complainant’s car after being involved in a hit-and-run car accident in the 9400 block of Kempwood.

The occupants inside the complainant’s stolen vehicle attempted to run on foot from officers, but were caught and taken into custody.

As a result of a follow-up investigation by Robbery Detectives, a 16-year-old juvenile male was charged with robbery with bodily injury, evading arrest, and failure to stop and give information.

A second juvenile suspect, 15, was also arrested for evading arrest, but was not identified as a suspect in the robbery case.

HPD describes the suspects as the following:

Suspect #1 - Black male juvenile, who is 16. He is seen on video as the suspect who approached the complainant and punched him in the face and then got into the complainant’s vehicle and sped away. He has been arrested and charged with robbery with bodily injury, evading arrest, and failure to stop and give information.

Suspect #2 - Hispanic male. He is seen on video as suspect in the back driver's side seat.

Suspect #3 - Black male. He is seen on video as frontseat passenger.

Suspect #4 - Hispanic male. He is seen on video as driver of white Toyota Camry.