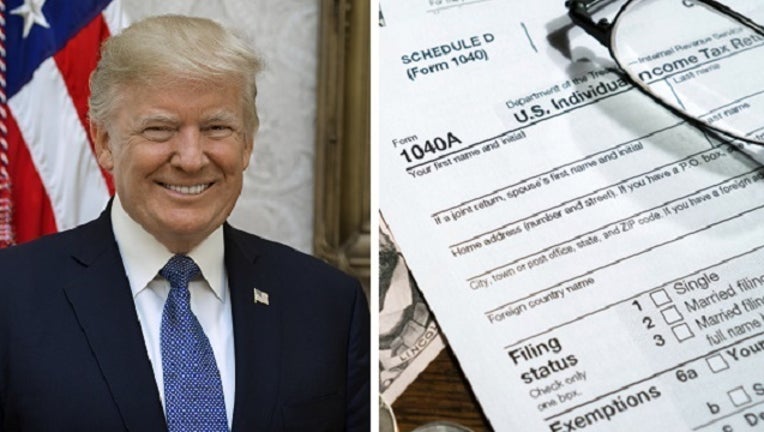 Most of the major Democratic candidates for president have already publicly disclosed their personal income tax returns as Trump has refused to do so, breaking with decades of tradition by candidates from both parties.

The Trump campaign said the law signed by Newsom is "unconstitutional." But even if the law withstands a likely legal challenge, Trump could avoid the requirement by choosing not to compete in California's March 3rd primary.

The Republican National Committee does not require candidates to appear on primary ballots in all 50 states. With no credible GOP challenger at this point, Trump likely won't need California's delegates to win the Republican nomination. The law does not apply to the general election ballot.

Harmeet K. Dhillon, one of California's two representatives on the Republican National Committee, called the bill an "illegal voter suppression scheme." Removing Trump from the state's primary ballot would likely depress turnout from GOP voters for down-ticket races and ballot measures, she said.

Newsom, who has repeatedly sparred with Trump over immigration policy and California's troubled high-speed rail project, said the state's influence as one of the world's largest economies gives it "a special responsibility" to hold candidates to high ethical standards, including disclosing information about their personal finances.

"These are extraordinary times and states have a legal and moral duty to do everything in their power to ensure leaders seeking the highest offices meet minimal standards, and to restore public confidence," Newsom wrote in his signing statement.

While states have authority over how candidates can access their ballots, the U.S. Constitution lays out a limited set of qualifications candidates must meet to run for president, said Rick Hasen, a professor specializing in election law at the University of California-Irvine School of Law. Those qualifications include requiring presidential candidates be over age 35, born in the U.S. and live at least 14 years in the country.

The bill's author, Democratic Sen. Mike McGuire, said it would be "inconsistent" with past practice for Trump to forego the primary ballot and "ignore the most popular and vote-rich state in the nation."

In a tweet to Trump, McGuire said: "If you want to be on the CA primary ballot, release your returns. It's a low bar to hit, unless you have something to hide."

Tax returns show income, charitable giving and business dealings, all of which Democratic state lawmakers say voters are entitled to know about.

California is the first state to enact legislation compelling political candidates to disclose their personal income tax returns. New York state has passed a law giving congressional committees access to Trump's state tax returns, which Trump has challenged in court . Efforts to pry loose his tax returns have floundered in other states.

California's first attempt to force presidential candidates to reveal their tax returns failed in 2017 when then-Gov. Jerry Brown, a Democrat, vetoed the law after raising questions about its constitutionality. Of the 18 state legislatures that introduced similar bills in 2019, 11 are still active, according to Dylan Lynch, a policy specialist at the National Conference of State Legislatures.

California's law requires candidates to submit tax returns for the most recent five years to California's Secretary of State at least 98 days before the primary. They will then be posed online for the public to view, with some personal information redacted.

The law also applies to candidates for governor. Newsom, who took office in January, released six years of his personal income tax returns prior to California's 2018 gubernatorial primary.

"Even if the tax returns are completely lawful, there is plenty of material for opposition researchers," he said.