A Garden Oaks business owner was blown away when she realized the giant chair that sat in front of her office was missing.

HOUSTON - A Houston business owner is trying to solve a mystery, over who pulled a big heist against her, and why.

Jess Hughes has a giant, blue Adirondack chair sitting outside her Citizen Pilates studio, in the Garden Oaks neighborhood.

Big Blue, as it's known, stands 9 feet tall, 7 feet wide, 8 feet deep and weighs about 200 pounds. Early October 19th, someone stole it. "Clients showed up for class, and asked 'what happened to the chair?" says Hughes, "I took a little glance and thought 'Wow, it's gone!" 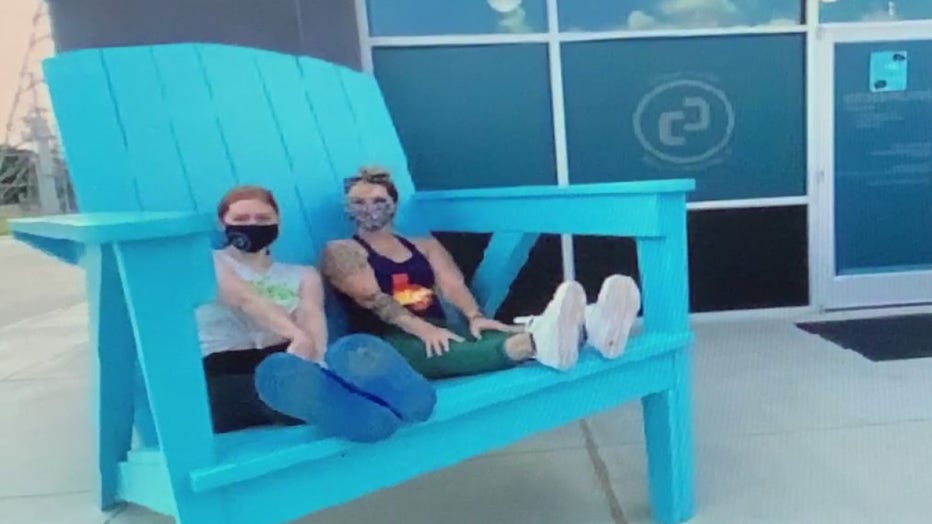 There are no security cameras, outside, but the thieves did leave some clues to what happened. The bolts holding Big Blue to the pavement were cut or removed. Blue scratch marks show the direction it was dragged around the side of the building, presumably to a waiting truck.

Jess Hughes never imagined someone would steal it. "It was a sentimental project for us," she says, "It wasn't cleaning supplies; it wasn't PPE; it was just a really cool chair that you could sit in, and feel like you were safe from the rest of everything because it was huge."

On Facebook, folks on the Garden Oaks neighborhood page are sharing pictures sitting in Big Blue and lamenting the loss, as are the clients who come to the studio. "We're all going through tough times and for someone to steal from a local business, like this, was really heartbreaking," says one woman as she left class, "I do hope they find the chair."

Jess Hughes hopes Big Blue comes home, too. Until then, she tries to find some comfort hoping it's with a giant Houstonian, who just needed someplace to sit. "Now he's got the coolest, comfiest chair that fits him," she says, "And he doesn't feel judged, because he feels normal, sitting in it."

Hughes didn't file a police report for Big Blue's theft, but it would not be a surprise if 'someone' noticed a really big chair, that suddenly appeared in the last day, who could give her a call.

Meantime she's contemplating having another chair built that's too big to fit in a truck and locked-down a little more securely to discourage the next thief who comes along.