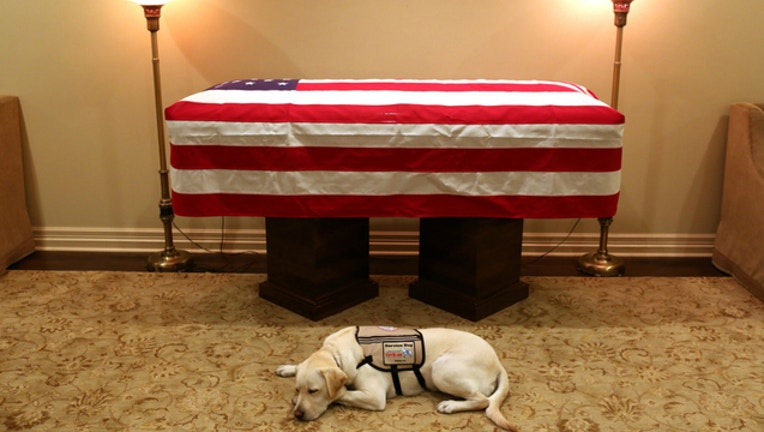 Since finishing his assignment with the Bush family, Sully returned to America's VetDogs in New York.

The Department of Defense says Sully will go on to join the therapeutic dog team at Walter Reed National Military Medical Center in Bethesda, Md. after the holidays, where he will provide stress relief and comfort to service members going through physical and occupational therapy.

Sully assisted the president, who had a form of Parkinson's disease, in opening doors, picking up items and getting help. The 41st president died Nov. 30 at his home in Houston at the age of 94.

Sully was trained at Maryland Correctional Training Center in Hagerstown, Md. through the America’s VetDogs program.

The pup was named for “miracle on the Hudson” airline pilot and Air Force Captain Chesley B. “Sully” Sullenberger, III.

“I always knew he was good. He was the calmest dog I’ve ever trained,” said Sullly's inmate handler Rory Koerber to WJZ-TV.

“I don’t think anybody knew he was gonna go to a president. When I found out I was like yeah, that’s a pretty big accomplishment. My grandma still can’t stop bragging about it,” said Koerber.

After his father's passing, former President George W. Bush posted McGrath's photo on his Instagram saying, "As much as our family is going to miss this dog, we’re comforted to know he’ll bring the same joy to his new home, Walter Reed, that he brought to 41."

Sully will be working with two dogs already in service at the veterans hospital, Sgt. Dillon and Sgt. Truman.

The dogs provided by America's VetDogs are provided free of charge for a service that can cost upward of $50,000 to breed, train and place them, Miller said.