Carter Willett turns 10 this month and is asking for birthday cards in the mail to help him celebrate the special occasion.

LOUISVILLE, Ky. - A Kentucky boy battling a rare form of cancer is turning 10 this month, and in honor of the momentous occasion, he’s asking for birthday cards to celebrate.

Carter Willett, of Louisville, has been battling Ewing's sarcoma, a rare form of cancer that grows in bones and the soft tissue around the bones, for the past year, according to a Facebook post by his father, Joshua Willett.

“All he wants this year is birthday cards,” Joshua Willett wrote. “We told him we'd try to get him as many as we could.”

Carter's mother, Kimberly Willett, told WDRB-TV that they first discovered a “little bump” when he was 5-months-old.

"The pediatrician said, 'Well, it doesn’t feel like anything. If it gets bigger or bothers him, just let us know,'" his mother told WDRB.

Over the span of eight years, the lump grew and tests later confirmed it had turned into cancer, the station reported.

In honor of Carter’s 10th birthday on Oct. 17, Joshua Willett said his son would like to receive birthday cards in the mail.

Since the family posted Carter’s request on social media, they have received more than 700 cards from across the country, as well as dozens of packages and gifts, WDRB reported.

“Carter is blown away by the love and we could not be more grateful for so many well wishes,” his father said. 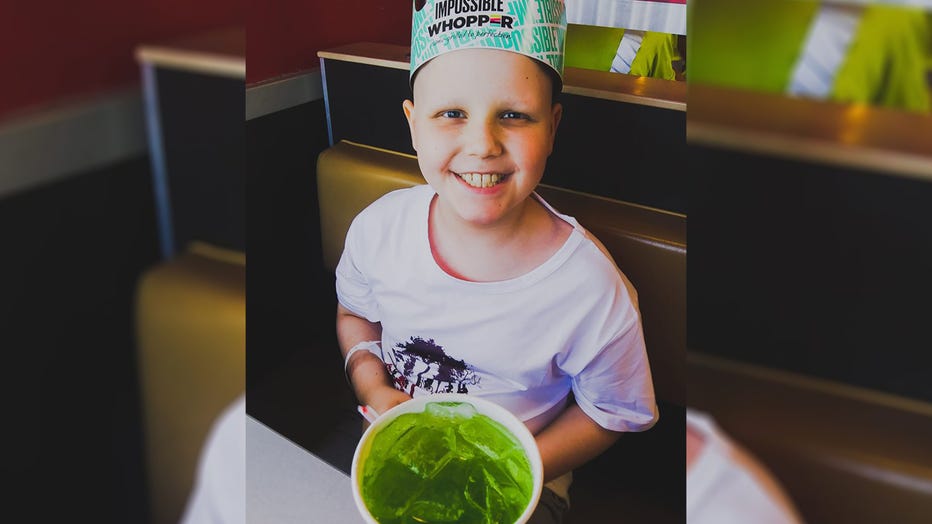 According to WDRB, the family has spent much of the past year at the hospital while Carter has undergone chemotherapy treatments. Actress and Louisville native Jennifer Lawrence stopped by the hospital to talk to children last Christmas Eve and posed for a photo with Carter.

Carter’s mother told the station that he will undergo more chemotherapy and scans at the hospital in the next three weeks.

"Then, hopefully, we will be completely finished," Kimberly Willett told WDRB.

Anyone wishing to send the 10-year-old a birthday card can do so at the following address: