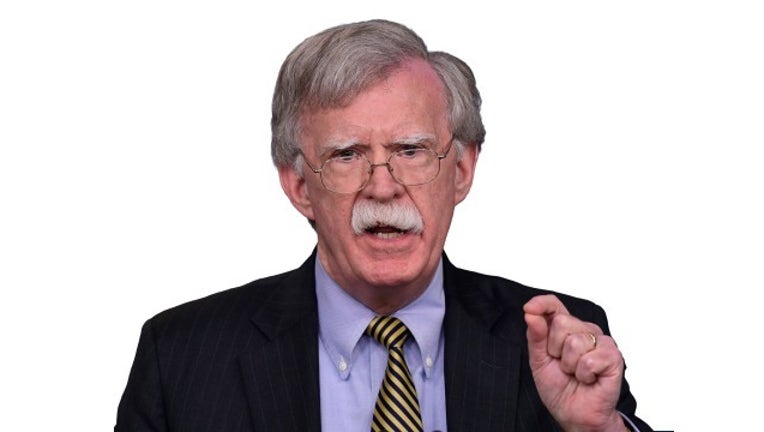 JERUSALEM (AP) - U.S. National Security Adviser John Bolton said Sunday that Iran should not "mistake U.S. prudence and discretion for weakness," after the U.S. abruptly called off military strikes against Iran in response to the shooting down of an unmanned American surveillance drone.

Bolton's tough message seemed to be aimed not only at Tehran, but also at reassuring key U.S. allies that the White House remains committed to maintaining pressure on Iran. Israel, along with Arab countries in the Gulf, considers Iran to be their greatest threat, and Trump's last-minute about face appears to have raised questions about U.S. willingness to use force against the Islamic Republic.

The downing of the aircraft on Thursday marked a new high in the rising tensions between the United States and Iran in the Persian Gulf. The Trump administration has vowed to combine a "maximum pressure" campaign of economic sanctions with a buildup of American forces in the region, following the U.S. withdrawal from the 2015 nuclear deal between Iran and world powers.

On Sunday, Iranian President Hassan Rouhani blamed the United States' "interventionist military presence" for fanning the flames. He was quoted by the official IRNA news agency.

"The region is very sensitive and security of the Persian Gulf and Gulf of Oman waterways is important to many countries. We expect international bodies to show proper reaction to the invasion move," Rouhani said about the downing of the U.S. drone.

President Donald Trump says he backed away from the planned strikes after learning 150 people would be killed. But Bolton, a longtime Iran hawk, emphasized that the U.S. reserved the right to attack at a later point. He also said a new set of sanctions on Iran are expected to be announced Monday.

"No one has granted them a hunting license in the Middle East. As President Trump said on Friday our military is rebuilt, new and ready to go," Bolton said in Jerusalem alongside Israeli Prime Minister Benjamin Netanyahu, himself a vocal critic of Iran over the years.

"And as he made clear yesterday, referring to his earlier remarks, the president said, 'I just stopped the strike from going forward at this time,'" Bolton added.

Bolton is visiting Israel for three-way talks with his Israeli and Russian counterparts that are expected to focus on Iranian involvement in conflicts across the region, including in neighboring Syria.

Israel's prime minister has been a vocal critic of Iran over the years, accusing the Islamic Republic of sinister intentions at every opportunity.

But Netanyahu, a longtime opponent of the nuclear deal, has remained uncharacteristically quiet throughout the current crisis between the U.S. and Iran. The Israeli leader appears to be wary of being seen as pushing the U.S. into a new Middle Eastern military conflict.

Standing alongside Bolton, Netanyahu sided with the Americans. He said Iranian involvement in conflicts across the region had increased as a result of the nuclear deal, which gave the country a new cash infusion, and had nothing to do with the U.S. exit from the agreement.

"After the deal, but before recent events, Iran has been on a campaign of aggression," he said. "Those who describe the recent actions as somehow opening a hornet's nest are living on another planet."

Netanyahu made no mention of the called-off airstrike and said he was "pleased" by U.S. plans for increased economic pressure. But Israeli commentators said that Trump's about-face was a cause for concern.

"It further undermined the already limited confidence of other Western leaders in Trump's judgment, it cast the U.S. president as a paper tiger and provided a moment of triumph for the ayatollahs in Tehran and it raised new doubts about the rationale behind Netanyahu's drive to persuade Trump to abandon the 2015 nuclear deal," wrote Haaretz columnist Chemi Shalev.

Meanwhile, Iran's foreign minister said Bolton was trying to force the U.S. into a conflict with Iran. Javad Zarif tweeted that the presidential adviser was "moments away from trapping" Trump into a "war," before the U.S. president called off the strikes against Iran.

A top Iranian military commander warned Sunday that any conflict with Iran would have uncontrollable consequences across the region and endanger the lives of U.S. forces. Maj. Gen. Gholamali Rashid's remarks, published by the semi-official Fars news agency, were made while addressing Iran's powerful Revolutionary Guards Corps during a field visit to a command center for Iranian radars and missile systems. The general oversees and coordinates joint military operations in the Iranian Armed Forces.

Throughout the recent crisis, Trump has wavered between bellicose language and actions toward Iran and a more accommodating tone. His administration is aiming to cripple Iran's economy and force policy changes by re-imposing sanctions, including on Iranian oil exports.

However, Trump said Saturday he appreciated that Iran did not fire on a U.S. spy plane with a crew of over 30 people that was flying Thursday over the same area as the drone that was shot down.

Iranian lawmakers on Sunday chanted "death to America" during an open session when acting parliament speaker Masoud Pezeshkian condemned what he said was the violation of Iranian airspace by the U.S. drone.

The regional tensions have prompted major international carriers, including Saudi Arabia's state airline Saudia, to divert flight routes away from the Gulf of Oman and Strait of Hormuz.

The U.S. Federal Aviation Administration's on Friday barred U.S.-registered aircraft from operating over parts of the Persian Gulf.

The U.S. blames Iran for apparent attacks on six oil tankers in the Gulf of Oman in recent weeks, which Iran denies. Iranian-allied rebels in Yemen have also recently launched attacks on a civilian airport in Saudi Arabia, a desalination plant and key oil pipeline in the kingdom. The kingdom has been at war in Yemen against the rebels since 2015.