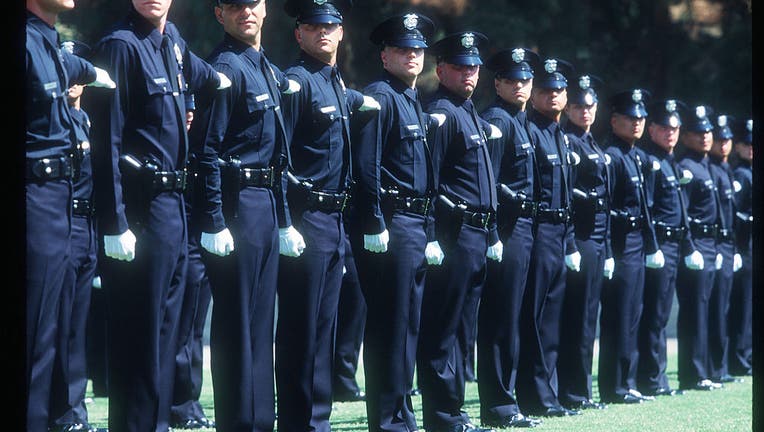 302578 04: Several new LAPD officers stand in formation during their graduation ceremony May 8, 1997 in Los Angeles, CA. Year after year the Los Angeles Police Department trains its new recruits in its own school. (Photo by Gilles Mingasson/Liaison)

SACRAMENTO, Calif. - Police officer candidates would have to get a bachelor’s degree or turn 25 before being allowed to carry a gun and wear a badge under a bill proposed by a California lawmaker.

Under current state law, most peace officers have to be 18 years old and must have a high school diploma or the equivalent.

Jones-Sawyer is hoping the bill will reduce the number of times police officers shoot or harm people by adding educational and maturity components to a police officer's basic job requirements.

Jolynn McCabe has battled alcoholism for 16 years. And when the Fremont grandmother recently relapsed, she realized she needed help. So, she asked her husband to call 911, hoping paramedics would get her detoxed and take her to a rehabilitation facility. But what started as a crisis call on Sept. 13, quickly escalated into a violent confrontation with law enforcement. Evan Sernoffsky reports

Jones-Sawyer pointed to a 2010 study that found college-educated police officers in two cities were less likely to use force in encounters with suspects. His bill cites other studies as well, including one in 2007 that showed officers with a bachelor’s degree were less likely to use physical force than officers with only high school educations. And a 2008 study of the Riverside County Sheriff’s Department found that age and education of officers was the main determinant in the likelihood to resort to the use of force.

In addition to getting a college degree, Jones-Sawyer said that age matters, too.

Law enforcement officers are required to make split-second decisions to protect the health and safety of the public and address dangerous situations, the bill notes. A young adult with a still-developing brain may struggle during events that require quick decision making and judgments. Scientific evidence on young adult development and neuroscience shows that certain areas of the brain, particularly those affecting judgment and decision making, do not develop until the early to mid-20s.

Even police organizations seem to be behind the general concept of the issue.

A study by the National Police Foundation, a nonprofit research organization based in Washington, D.C., also found college-educated officers use force less often and have fewer complaints against them than their non-college-educated peers. The Peace Officers Research Association of California and the California Police Chiefs Association have supported less ambitious proposals to increase education requirements for officers, the Sacramento Bee reported.

If California adopts Jones-Sawyer’s bill, the Sacramento Bee notes the Golden State would have the highest age requirement in the country. Four states — Illinois, North Dakota, New Jersey and Nevada — each require a bachelor’s degree or a supplemental combination of education and experience.

This is not Jones-Sawyer's first attempt to reform the criminal justice system.

Last legislative season, his bill to increase the criminal penalties imposed when a person knowingly makes a false 911 call for the purpose of harassing someone because of their race, gender or sexual orientation passed into law.