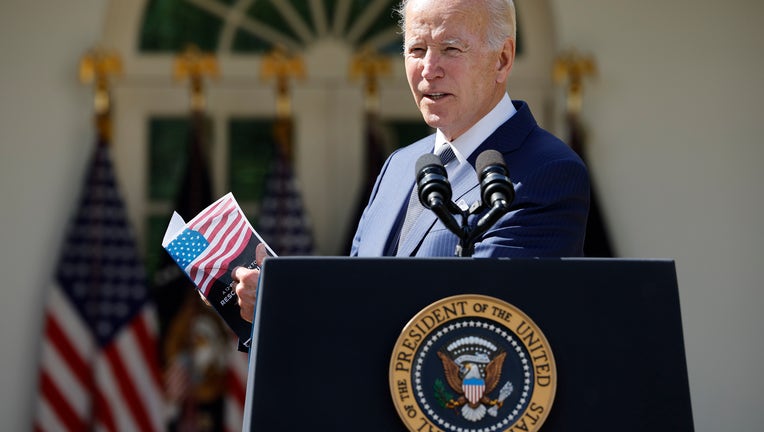 WASHINGTON, DC - SEPTEMBER 27: U.S. President Joe Biden holds up a piece of paper he says highlights a plan by Sen. Rick Scott (R-FL) while delivering remarks about lowering health care costs in the Rose Garden at the White House on September 27, 202

SAN DIEGO - President Joe Biden on Tuesday kept the nation’s cap on refugee admissions at 125,000 for the 2023 budget year, despite pressure from advocates to raise it even higher to meet the need after falling far short of that target this year.

Refugees advocates have been pushing the Biden administration to do more to restore the U.S. Refugee Admissions Program. The program suffered deep cuts under the Trump administration, which slashed admissions to a record low.

Biden raised the cap to four times that amount this year, but so far fewer than 20,000 refugees have been admitted this budget year, according to the latest count in August. The budget year ends Sept. 30.

Biden said in his presidential determination that the admissions should be earmarked for 40,000 refugees from Africa, 35,000 from South Asia and and 15,000 each from East Asia, Europe and Latin America.

Krish O’Mara Vignarajah, head of Lutheran Immigration and Refugee Service, said the Biden administration must act now to improve the U.S. Refugee Program with the United Nations reporting a record 100 million people being displaced from their homes.

"It must ramp up and streamline overseas processing of refugee applications if this lifesaving program is to remain relevant amid an unprecedented global displacement crisis," she said in a statement.