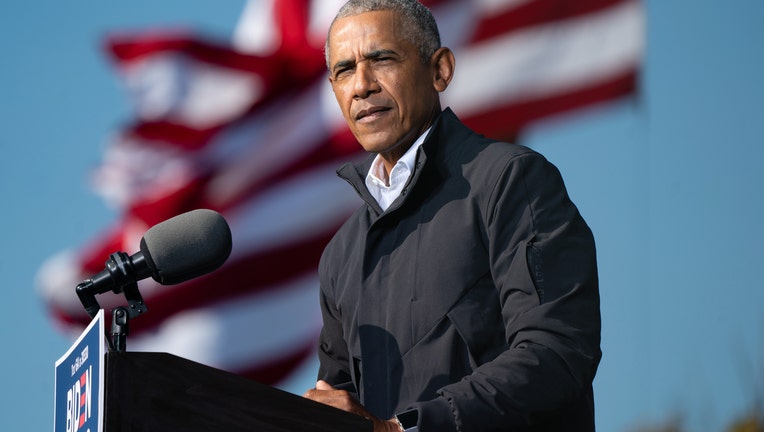 Former US President Barack Obama speaks at a Get Out the Vote rally as he campaigns for Democratic presidential candidate former Vice President Joe Biden in Atlanta, Georgia on November 2, 2020. (Photo by Elijah Nouvelage / AFP) (Photo by ELIJAH NOUV

NEW YORK - Former President Barack Obama’s “A Promised Land” sold nearly 890,000 copies in the U.S. and Canada in its first 24 hours, putting it on track to be the best-selling presidential memoir in modern history.

The first-day sales, a record for Penguin Random House, include pre-orders, e-books and audio.

“We are thrilled with the first day sales,” said David Drake, publisher of the Penguin Random House imprint Crown. “They reflect the widespread excitement that readers have for President Obama’s highly anticipated and extraordinarily written book.”

The only book by a former White House resident to come close to the early pace of “A Promised Land” is the memoir by Obama’s wife, Michelle Obama, whose “Becoming” sold 725,000 copies in North America its first day and has topped 10 million worldwide since its release in 2018. “Becoming” is still so in demand that Crown, which publishes both Obamas and reportedly paid around $60 million for their books, has yet to release a paperback.

RELATED: Michelle Obama nominated for a Grammy for best-seller 'Becoming'

As of midday Wednesday, “A Promised Land” was No. 1 on Amazon.com and Barnes & Noble.com. James Daunt, CEO of Barnes & Noble, said that the superstore chain easily sold more than 50,000 copies its first day and hoped to reach half a million within 10 days.

“So far it has been neck and neck with Michelle Obama’s book,” he said.

By comparison, Bill Clinton’s “My Life” sold around 400,000 copies in North America its first day and George W. Bush’s “Decision Points” around 220,000, with sales for each memoir currently between 3.5 and 4 million copies. The fastest-selling book in memory remains J.K. Rowling’s seventh and final Harry Potter novel, “Harry Potter and the Deathly Hallows,” which came out in 2007 and sold more than 8 million copies within 24 hours.

Obama’s 768-page memoir, which came out Tuesday and has a list price of $45, had unusually risky timing for a book of such importance to the author, to readers and to the publishing industry. It came out just two weeks after Election Day and could have been overshadowed had the race still been in doubt or perhaps unwanted by distressed Obama fans if President Donald Trump had defeated Democratic nominee Joe Biden. But Biden won and his victory likely renews interest in an era when he was Obama’s trusted and popular vice president.

Obama himself acknowledges that he didn’t intend for the book, the first of two planned volumes, to arrive so close to a presidential election or to take nearly four years after he left the White House — months longer than for “My Life” and two years longer than “Decision Points.” In the introduction to “A Promised Land,” dated August 2020, Obama writes that “the book kept growing in length and scope” as he found he needed more words than expected to capture a given moment — a bind many authors well understand. He was also working under conditions he “didn’t fully anticipate,” from the pandemic to the Black Lives Matters protests, to, “most troubling of all,” how the country’s “democracy seems to be teetering on the brink of crisis.”

Because of the pandemic, Obama will not go on the all-star arena tour Michelle Obama had for “Becoming.” But he benefits from the attention of any memoir by a former president and by the special attention for Obama, who has the rare stature among politicians of writing his own books and for attracting as much or more attention for how he tells a story than for the story itself. Obama has already written two acclaimed, million-selling works, “Dreams from My Father” and “The Audacity of Hope, which came out in 2006. His new book covers some of the same time period as his previous ones, while continuing his story through the first 2 1/2 years of his presidency and the 2011 killing of Osama bin Laden by the Navy SEALS.

Publishers Weekly praised the book as “shot through with memorable turns of phrase,” while other reviews were more qualified, calling the book all too reflective of Obama’s thoughtful, even-handed style. The New York Times’ Jennifer Szalai wrote that the “most audacious thing” about “A Promised Land” is “the beaming portrait” of Obama on the cover. The Washington Post’s Carlos Lozada noted that in “domestic policy and foreign affairs, in debates over culture and race, Obama splits differences, clings to the middle ground and trusts in process as much as principle.”

“It turns out he is not a ‘revolutionary soul’ but a reformist one, ‘conservative in temperament if not in vision.’ Behind those dreams, the audacity and all that promise is a stubborn streak of moderation,” Lozada wrote.

Obama’s book is the highlight of publishing’s holiday season and for some independent bookstores, the potential difference between remaining in business or closing. Publishing sales have been surprisingly stable during the pandemic, but much of the benefit has gone to Amazon.com as readers turned increasingly to online purchases. The American Booksellers Association, the independent sellers’ trade group, has warned that hundreds of stores could go out of business if holiday sales fall short.

Kris Kleindienst, co-owner of Left Bank Books in St. Louis, anticipates selling around 1,000 copies by the end of the year, a number which makes “a HUGE difference” for annual revenues, she wrote in an email. Sarah McNally, owner of McNally Jackson Books in Manhattan, said she sold around 600 copies in the first 24 hours, a pace exceeded only by the final Harry Potter book.

“It’s not hard to be a bright spot this year, a year when we would have gone out of business without federal aid,” McNally said. “But Obama does feel like a savior, as do our customers for buying this from us.”