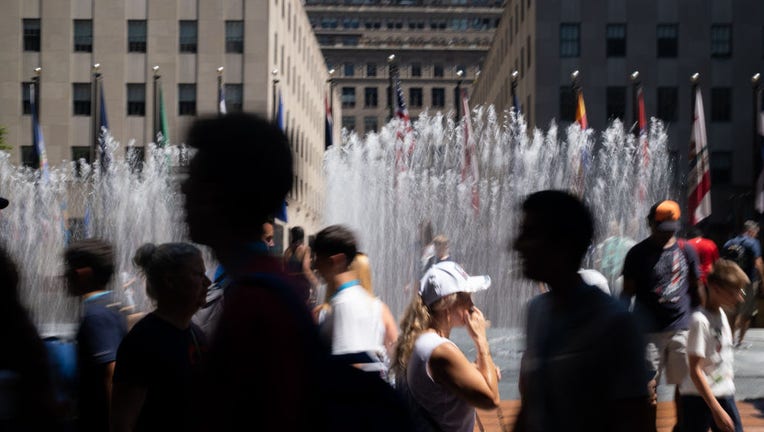 People walk past people playing in the Changing Spaces fountain by Jeppe Hein at Rockefeller Center during a heat wave on July 23, 2022 in New York City. (Alexi Rosenfeld/Getty Images)

If recently released climate outlooks are accurate, don’t look for many changes in the overall weather patterns across the Lower 48 through the last month of meteorological summer.

The National Oceanic and Atmospheric Administration’s Climate Prediction Center believes La Niña’s grip on weather patterns across the globe could intensify, which means the U.S. could be in store for more weather extremes.

The summer started out with well above-average temperatures and below-average precipitation as a whole across the nation, and for most, this general pattern will be the case into September.

Forecasters say areas of high pressure will be common across the northern tier of the country, which will result in heat waves. 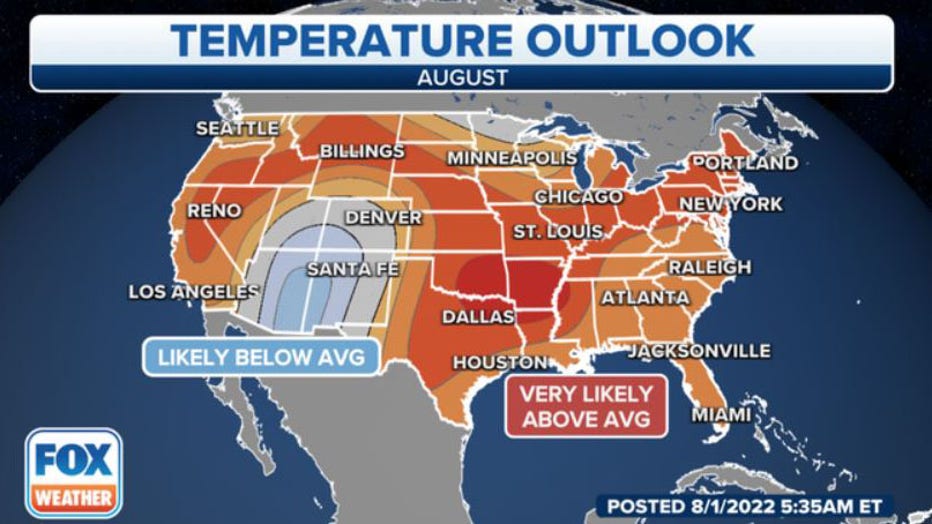 An upper-level dome of high pressure tends to cut down on cloud cover and moisture, meaning if you find yourself under it, don’t look for relief in the form of rain.

NOAA believes the Plains and the Mississippi Valley have the greatest chance of seeing above-average temperatures through the month.

If you want to beat the heat, there are a few places across the Lower 48 that could see near- or below-average temperatures.

Forecasters expect the extreme Upper Midwest and the Desert Southwest to possibly have a cooler-than-average August.

The NOAA outlook expects most of the Plains and Northeast to see below-average rainfall through the next 30 days. 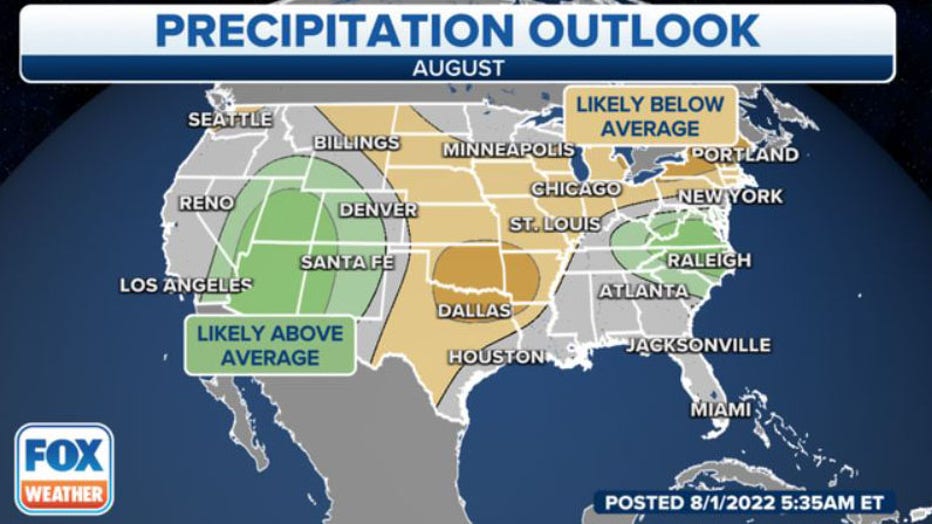 Thunderstorms over the Southeast and Southwest could keep the rain gauges busy.

A robust monsoon across the Desert Southwest is expected to continue well into September, meaning above-average chances for heavy rain across the Four Corners region are likely.

The recent showers and thunderstorms have put a dent in recent drought levels, and large parts of Arizona and New Mexico have seen rainfall totals more than 200 percent above average during the past month. 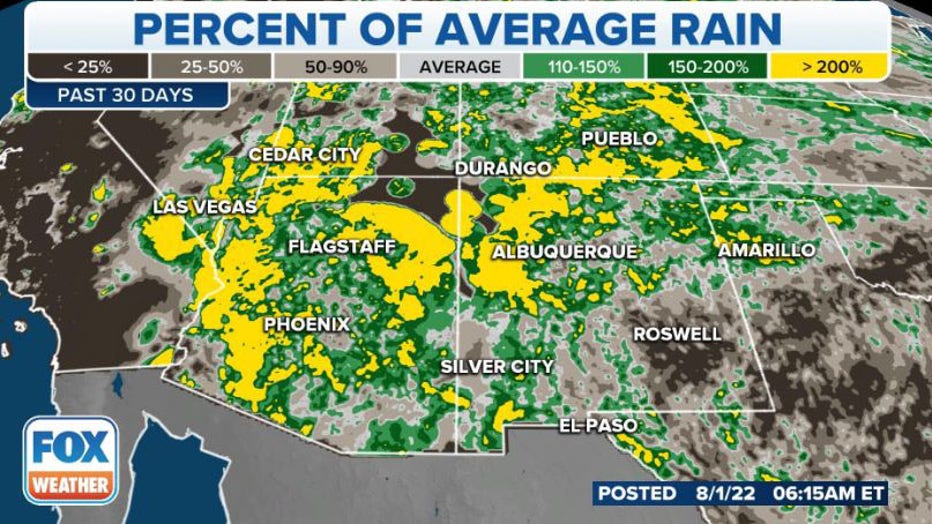 The percent of average rain over the past 30 days is depicted by the various shadings. (FOX Weather)

Forecasters believe the beneficial rains will remain far enough away from areas experiencing wildfires in California to bring any significant relief for firefighters.

The entire Golden State is experiencing drought conditions that show no improvement.

Forecasters admit questions remain about how both the Atlantic and Eastern Pacific hurricane seasons will impact the country through the end of the month.

Occasionally, during active Eastern Pacific tropical weather seasons, moisture from remnant storms can invade the Southwest and enhance the monsoon.

The story is much different in the Atlantic Basin, where hostile conditions and an overall downward pattern dominated most of July. 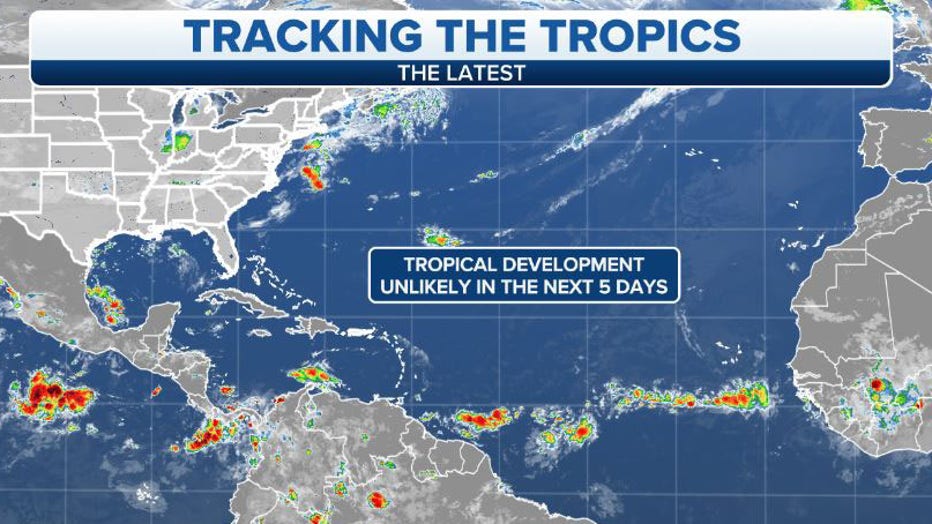 A current overview of the tropics in the Atlantic Basin. (FOX Weather)

Typically, August kicks off the heart of the hurricane season, and if the basin holds true to outlooks, tropical activity is expected to increase during the final weeks of summer 2022.

Upper-level steering patterns will dictate the future paths of the tropical activity, which always has a chance of disrupting climate outlooks along the Gulf Coast and the Southeast.

Get the latest updates on this story at FOXWeather.com.