NASHVILLE, Tenn. - AT&T will waive data overage charges for wireless for it wireless and prepaid customers who may have been affected by the explosion near the telecommunications giant's central office in Nashville on Christmas Day.

The country's largest mobile services provider, will be waiving data overage charges for customers in 1,166 zip codes across from Sunday through New Year’s Eve. Service charges will be automatically waived for wireless customers with billing addresses and prepaid customers with phone numbers in those directly impacted zip codes across Tennessee, Kentucky, Indiana, Alabama, Georgia, Illinois and Missouri.

"Keeping you connected is always our priority," AT&T Communications CEO Jeff McElfresh said in a statement. "With this extended outage and the complicated recovery, the right thing is to waive wireless data overages in the impacted during this time."

A full list of zip codes where customers will receive the waiver can be found here.

The announcement comes after AT&T outages have stretched into their third day Sunday. As of Sunday evening, the company said 96% of its wireless network was restored, 60% of business services and 86% of consumer broadband and entertainment services.

McElfresh said that the AT&T's office suffered "significant damage" in the blast, with the explosion and resulting water and fire damage taking out a large portion of the company's backup power generators.

"That led to service disruptions across parts of Tennessee, Kentucky and Alabama," McElfresh said. "More than 48 hours later, some customers are still experiencing outages. We know it is frustrating and we apologize for the inconvenience. We also thank you for your understanding." 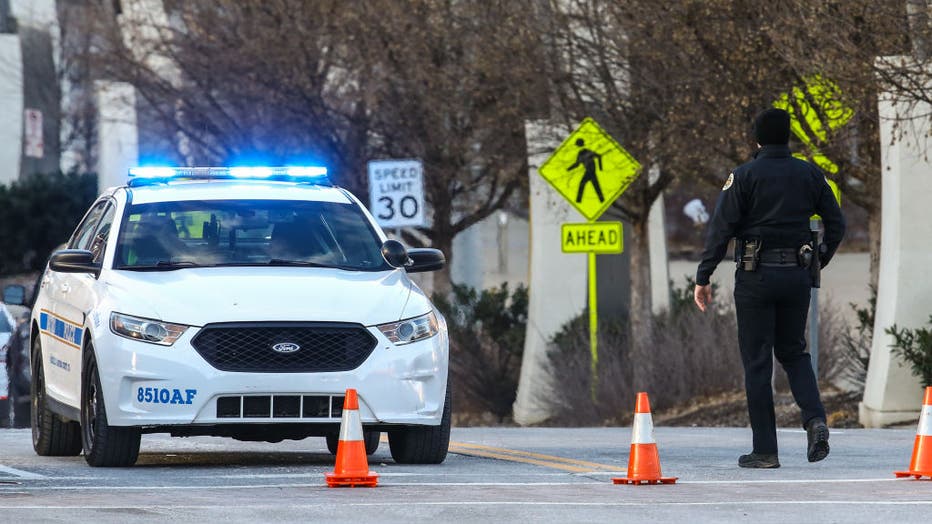 Police close off an area damaged by an explosion on Christmas morning on December 25, 2020 in Nashville, Tennessee. (Photo by Terry Wyatt/Getty Images)

As of 4:15 p.m. local time on Sunday 96% of AT&T's wireless network, 60% of its business services and 86% of its consumer broadband and entertainment services had been restored. Power had also been restored on multiple floors of AT&T's building and over 25 temporary satellite cell towers and 24 additional trailers of disaster recovery equipement have been deployed across the iimpacted area.

"Our buildings have been damaged, but our determination to serve you and our community is undeterred," McElfresh added. "You have my commitment that we’ll continue to work around the clock until service is restored. And we will continue to prioritize the security of all our facilities that serve customers across the nation."

The company aims to restore all service by late Sunday evening.

AT&T's service restoration continues amid an active investigation by the FBI and other law enforcement agencies.

Police confirmed Sunday that the suspect behind the bombing was 63-year-old Anthony Quinn Warner-- and that he had been killed in the blast.

Human tissue was found amongst the debris left behind by the explosion, and DNA examinations of tissue samples by The Tennessee Bureau of Investigation and FBI were found to be consistent with Warner. In addition, the Tennessee Highway Patrol uncovered a vehicle identification number from the remains of the RV, which revealed it was registered to Warner.

While authorities are still following leads, there is "no indication" that any other people were involved. Police added that a motive for the bombing remains unknown and that officials are looking to speak with anyone familiar with Warner’s ideologies. In addition, police stressed that Nashville is "considered safe" and that there are "no known threats against the city". However, a curfew will be in place in the area of the blast while the investigation continues.