FOX 26’s Tiffany Justice talked with folks who reflected on the Capitol riots during a vigil at the Mickey Leeland Federal Building.

But exactly one year later, she’s sitting in prison because of her role in the chaos.

Ryan was among hundreds who repeated baseless claims that the 2020 election was stolen from Trump as they stormed the U.S. Capitol and interrupted Congress’ certification of the results. 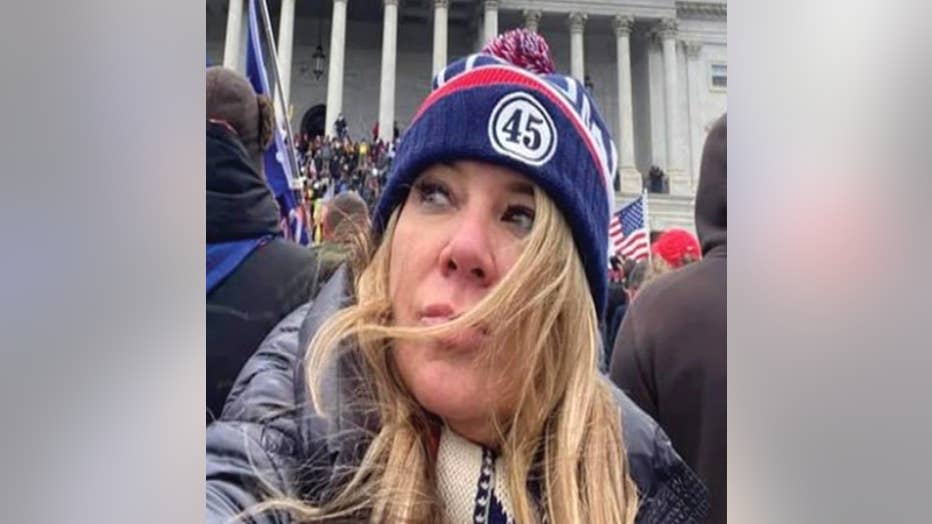 Jennifer Leigh Ryan posted to social media this image of herself standing on the grounds of the U.S. Capitol building on Jan. 6, 2021, according to court records. (Credit: U.S Department of Justice)

"We are going to f---ing go in here. Life or death, it doesn’t matter," she said during the Facebook Live, according to court documents.

Ryan, who recently began her 60-day prison sentence for parading, demonstrating or picketing in a Capitol Building, is one of at least 63 Texans who were charged with various crimes for their actions that day. That includes Mark Middleton — charged with assaulting an officer and multiple counts of obstruction — who is currently running for a Texas House seat.

The number of Texans facing charges continues to grow as the FBI proceeds with its investigations and makes arrests. Charges against participants — and the punishments they face — range from misdemeanors with minor penalties to felonies that could result in years of prison time.

Trump had called on his supporters to rally in Washington, D.C. And at a protest earlier in the day, he acknowledged that rallygoers were going to march toward the Capitol to encourage lawmakers not to certify the vote.

"I know that everyone here will soon be marching over to the Capitol building to, peacefully and patriotically, make your voices heard today," he said.

Texas Republicans often took the lead on baseless lawsuits that sought to dismiss the results of the 2020 election and tried to rally Trump supporters to protest his loss.

Texas has the third-highest number of residents charged with crimes related to the Capitol riot, just under Florida and Pennsylvania, according to USA Today's database. Texans make up about 9% of those in the country charged with crimes.

U.S. Rep. Vicente Gonzalez, D-McAllen, said in an interview that fear and disbelief overwhelmed him as he hid from the mob rushing through the Capitol that day.

"I don't think there was anyone in the chamber who didn't think they might not make it home that night," he said.

It seemed like both sides of the aisle were initially united in outrage over what happened, Gonzalez said. However, he said the tides quickly shifted once the dust settled. Soon, each party took a polarized stance on the event, with a few exceptions on the Republican side, he said.

Every criminal case against those charged is being prosecuted by the U.S. Attorney’s Office for the District of Columbia. But each defendant must appear before a district court where they are arrested. That means dozens of different courtrooms across the state are overseeing these cases.

Around 40 people involved in the Capitol riot remained at the District of Columbia jail awaiting trial as of early November, according to The New York Times. It is unclear how many of those were Texans.

Out of the more than five dozen Texas defendants, only five people have been sentenced so far — and four of those are serving prison time. Each of those five cases were resolved after plea agreements lowered the involved charges to relatively low-level offenses.

Five Texans have dates scheduled for their sentencing. Cases against the dozens of other Texans facing charges — including 20 people accused of causing violence — are still working through the courts.

Five Texans have already been sentenced

Troy Anthony Smocks of Dallas was given the heaviest sentence of any Texan so far — and was the first Texan charged with a felony to be sentenced. On Oct. 21, he was given 14 months of incarceration and three years of supervised release for making threats in interstate communications and for posting threatening social media messages.

According to court documents, Smocks took to the social media website Parler detailing his participation and outlining threats.

"So over the next 24 hours, I would say, let's get our personal affairs in order. Prepare Our Weapons, and then go hunting. Lets hunt these cowards down like the Traitors that each of them are," Smocks wrote, according to court documents. "It wasn't the building that We wanted...it was them!"

Smocks, who is Black, argued he was treated more severely by prosecutors because of his race, according to The Washington Post. U.S. District Judge Tanya S. Chutkan of Washington, D.C., who is also Black, dismissed Smocks’ claim.

​​"I have not seen a scintilla of evidence that prosecutors’ decisions have been racially motivated," Chutkan said.

The FBI said Smocks made a flight reservation to depart the U.S. for a foreign country on the morning of Jan. 15. He was arrested the day before.

His sentence was harsher than what federal prosecutors recommended, according to The Washington Post. The judge in charge of the case said it was necessary to deter any similar future actions from others.

"Because the country is watching," Chutkan said, according to The Post, "to see what the consequences are for something that has not ever happened in this country before, for actions and crimes that undermine the rule of law and our democracy."

Matthew Carl Mazzocco was a mortgage loan officer in San Antonio before he was fired following his arrest, according to KSAT-TV. He was sentenced in October to 45 days of incarceration and 60 hours of community service after he pleaded guilty to parading, demonstrating or picketing in a Capitol building.

The FBI received an anonymous tip identifying Mazzocco based on social media posts, including one post from outside the Capitol that he captioned: "The capital is ours!" 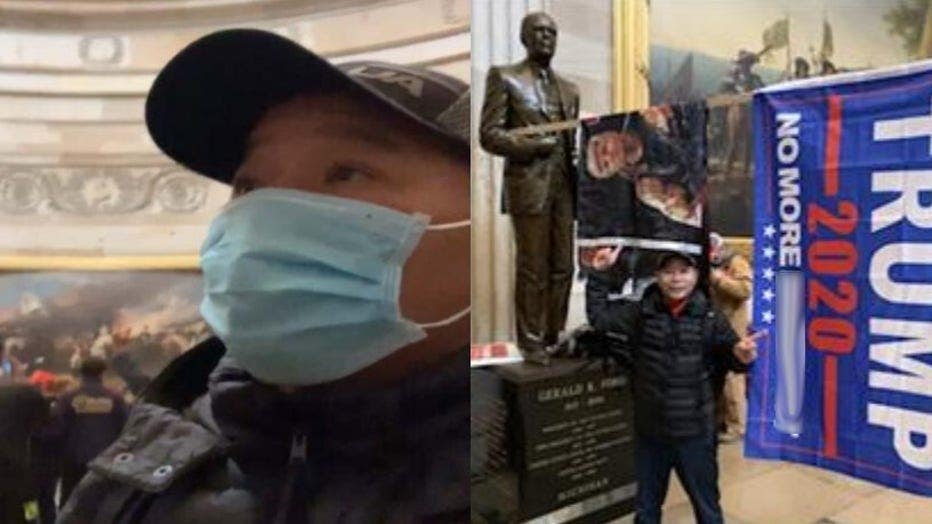 Tam Dinh Pham posing in front of a banner on Jan. 6, 2021, in support of former President Donald Trump. Investigators found this photo on Pham’s phone, according to court records. (Credit: U.S Department of Justice)

Tam Dinh Pham was an 18-year veteran of the Houston police force before he resigned after investigators began probing him over his actions during the Capitol riot.

Pham was sentenced to 45 days in prison, given a $1,000 fine and ordered to pay $500 for damages to the Capitol. He pleaded guilty on Sept. 20 to parading, demonstrating or picketing in a Capitol building after initially denying that he was there. Investigators found photos that he took of the scene that proved he was inside.

Ryan, the Frisco real estate agent, took a private jet to Washington, D.C., saying on Twitter afterward, "We just stormed the Capital. It was one of the best days of my life," according to court records.

She was sentenced on Nov. 4 to 60 days in prison, fined $1,000 and ordered to pay $500 for damages to the Capitol. After initially pleading not guilty, she eventually pleaded guilty to parading, demonstrating or picketing in a Capitol building.

Ryan made headlines for her unapologetic social media presence that she adopted soon after the Capitol riot. In March, she tweeted: "Sorry I have blonde hair white skin a great job a great future and I’m not going to jail."

When handing down her sentence, the judge overseeing her case cited a lack of remorse on Ryan’s part.

Ryan’s attorney, Guy Womack, said in an interview the ruling was unfair because it was based on her actions after Jan. 6 and that Ryan later demonstrated remorse. 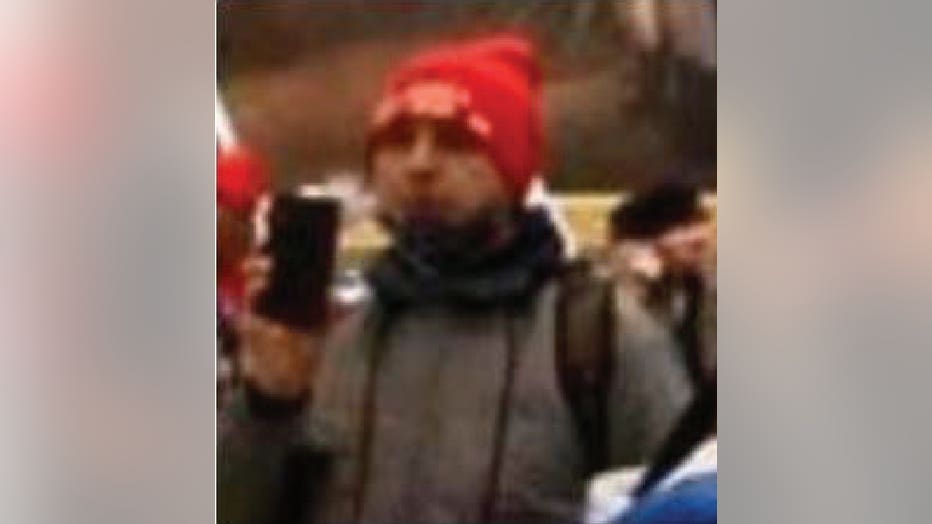 Eliel Rosa posted a photo of himself Jan. 6, 2021, on Facebook, according to court records. (Credit: U.S Department of Justice)

Eliel Rosa of Midland pleaded guilty to one count of parading, demonstrating or picketing in a Capitol building and was sentenced Oct. 12 to one year of probation and 100 hours of community service. Rosa also was ordered to pay $500 for damages to the Capitol.

Rosa was arrested along with Jenny Cudd, a former Midland mayoral candidate. Cudd was seen on video saying, "We did break down the Nancy Pelosi’s office door… Fuck yes, I am proud of my actions, I fucking charged the Capitol today with patriots today."

Cudd is set to be sentenced on March 18.

One Texas defendant is seeking a seat in the Texas House

Mark Middleton launched a campaign for a seat in the Texas House of Representatives following his indictment. He faces charges of assaulting an officer and multiple counts of obstruction.

He is among three Republicans challenging state Rep. David Spiller in the March 1 GOP primary for the North Texas seat.

He and his wife, Jalise Middleton, are accused of pushing against police barricades, grappling with officers and cursing at them. His wife is accused of repeatedly grabbing an officer and striking them with her hand. The couple struggled with two officers until they were hit with pepper spray, according to the complaint. 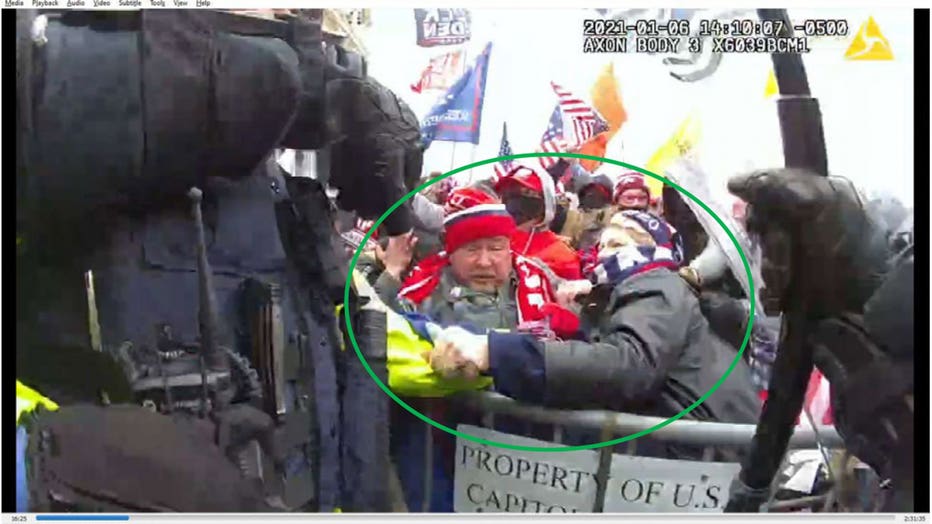 A screenshot of Mark Middleton on Jan. 6, 2021, on the grounds of the U.S. Capitol, captured from body cam footage (Credit: U.S Department of Justice)

According to court documents, Jalise Middleton commented on Facebook after the riot, "We fought the cops to get in the Capital and got pepper sprayed and beat but by gosh the patriots got in!"

The couple says they never entered the Capitol itself. Mark Middleton said they both rejected plea bargains because they deny that they attacked police. He alleges that the officers began beating them while their backs were turned and they were only reacting to the blows.

Mark Middleton — whose platform includes calling for Texas to consider seceding from the U.S. — said in an interview with The Texas Tribune that he’s toyed with the idea of running for political office before, but his experience on Jan. 6 inspired him to run. Other than his cursing at officers and subsequent Facebook posts he made, Middleton said he doesn’t regret his actions that day.

He claims that most of the people he’s spoken to following the events, have considered his involvement a positive thing.

"Actually, it's great publicity," he said.

Middleton said his pilot’s license was revoked following the incident, and he feels that many of the people present on Jan. 6 are being mistreated — especially the ones who never stepped foot in the Capitol. He thinks that their involvement is being overblown.

"They're not telling the story of middle-aged people like me and my wife that were model citizens in the community and well respected and highly involved with no criminal records whatsoever being arrested like a common violent criminal," he said.

The FBI is continuing to solicit tips from the general public to help identify people in over 1,500 photos and videos. As more arrests are made, the defendants are added to the bureau’s database.

The arrests made so far have been a result of a mass collaboration between local and federal law enforcement and tipsters. And there are no signs of it slowing down quickly.

The government estimates as many as 2,500 people who took part in the events of Jan. 6 could be charged with federal crimes, according to The New York Times. That includes more than 1,000 incidents that prosecutors believe could be assaults.

A year later, the vast majority of cases have yet to reach the sentencing phase. As time goes on, the cases will continue to progress in courts throughout the country.

Disclosure: Facebook and The New York Times have been financial supporters of The Texas Tribune, a nonprofit, nonpartisan news organization that is funded in part by donations from members, foundations and corporate sponsors. Financial supporters play no role in the Tribune's journalism. Find a complete list of them here.