Some fans are taking their dedication to the next level by getting their cars decked out in custom Astros gear.

HOUSTON - One way Astros fans are celebrating World Series is by customizing their cars.

For Edgar Alvarado, an Astros fan in west Houston, the tailgate on his pickup is his pride, joy and an attention-getter. It’s covered in a wrap photo of Minute Maid Park and an Astros logo.

"I got a lot of people honking at me, and clapping you know, and thumbs up," said Alvarado.

Alvarado got the wrap after the Astros won their first World Series in 2017. Now he’s planning to upgrade it for World Series 2019. As it turns out, he may have to wait in line. 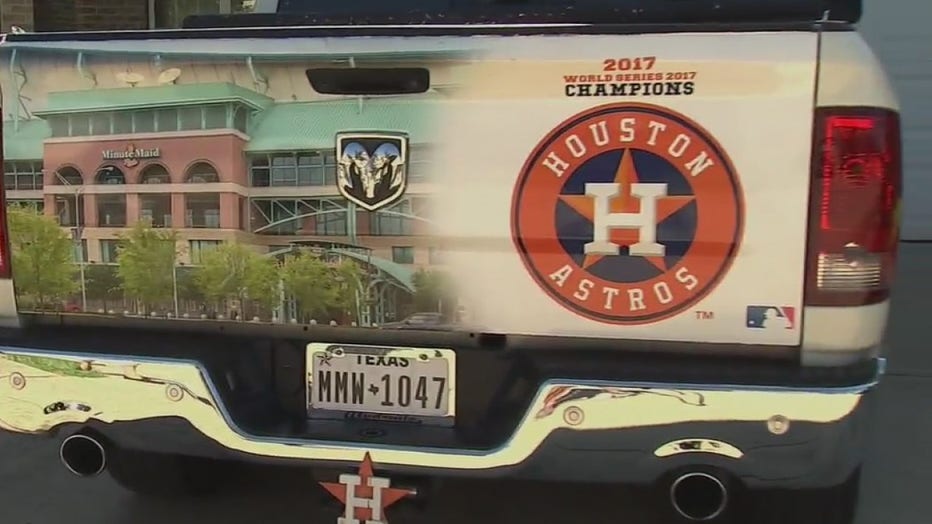 He says she has to keep his head on a swivel when he drives the blue and orange wrapped corvette with the Astros emblem and “Take It Back” logo.

"People are stopping,” said Lopez. “They're going around us. They're cutting us off--to take pictures.... My son's 10, and he's like, 'Dad, we're like rock stars.' That corvette just gets so much attention."

A full custom wrap can cost you upwards of $3,000—not a far cry from the price of some good World Series tickets.

"Tickets are available; you just gotta be willing to let the money go,” said Lopez. "I think we're gonna end up right around $5,000 for the both tickets, but it's going to be Section 111."

Pricey tickets are worth the price when creating priceless memories.

"Being a father and a son and having that bond and the game connecting you guys...that's worth more than the price of the tickets,” said Lopez.