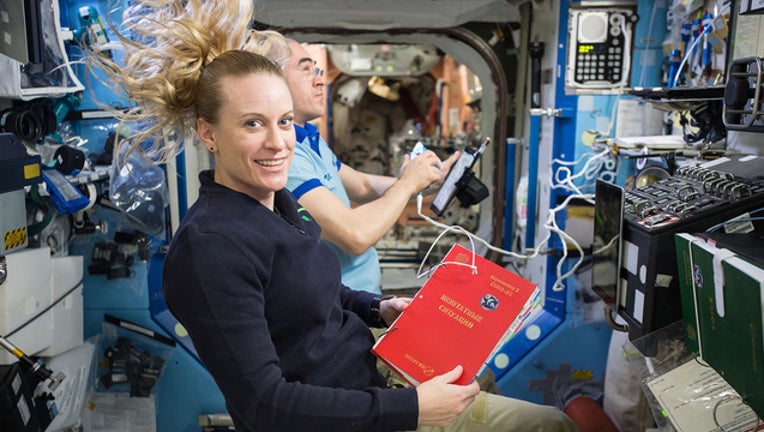 CAPE CANAVERAL, Fla. (AP) - The lone American in orbit will end up voting for president from the International Space Station, if her homecoming is delayed.

NASA astronaut Kate Rubins said Thursday that she doesn't know yet whether she'll return to Earth in late October as planned. The Russians have delayed the next crew launch for technical reasons. It was supposed to take place Friday, but it's off for at least a month.

Rubins and her two crewmates -- a Russian and Japanese -- can't come home until the next three-person crew arrives. NASA likes to have an overlap of several days, if not more.

Rubins told The Associated Press she got an absentee ballot before she rocketed away in July, just in case. When she's not in space, home is Houston, Texas, but in this case, the absentee ballot lists her address as "low-Earth orbit."

"It's very incredible that we're able to vote from up here," she said, "and I think it's incredibly important for us to vote in all of the elections."

American astronaut Shane Kimbrough is waiting in Russia to join her at the space station, along with two Russians.

Rubins said she's got plenty to keep busy, regardless of when she returns.

There is so much science work up there, "Nobody would mind too much if we got extended a little bit. We would be able to get a lot of research done."

A professional virus hunter before becoming an astronaut, Rubins, 37, last month became the first person to perform full-blown DNA decoding, or sequencing, in space. She's already racked up more than 1 billion base pairs, which are the building blocks of DNA. The pocket-size sequencing device was launched over the summer by SpaceX, currently grounded by a launch pad accident on Sept. 1.

Rubins said the biomolecule sequencer has worked surprisingly well in space, despite the different way bubbles and fluids behave in weightlessness.

All of the sequencing data are beamed down immediately to scientists on the ground, so any potential delays in SpaceX deliveries and return shipments won't hamper the experiment. This real-time processing will prove beneficial for diagnosing astronaut illnesses in the future, Rubins said, as well as ascertaining any potential bacterial outbreak in the orbiting outpost itself.

The space station, meanwhile, is well-stocked with both supplies and research materials, Rubins said. In fact, she has "more work than I have hours to do in the day."

Orbital ATK, NASA's other station supplier, is targeting Oct. 9 or soon thereafter for its next shipment, after being grounded for two years by a launch explosion.

"Spaceflight is a tricky business," Rubins told the AP. "It is definitely difficult, and I think we forget that sometime."