Fake vaccine cards on the rise: What you need to know

In Less than two weeks, New Yorkers will have to show proof of vaccination status to get into restaurants, gyms & entertainment venues. But the question some New Yorker's have...Is this the best way to encourage people to get the jab when they can easily fake their vaccination status?

A study conducted by AstraZeneca regarding its COVID-19 vaccine found a slightly increased risk of blood clots after the first dose of the shot and no increased risk after receiving the second jab.

The research, published July 28 in the medical journal The Lancet, comes after reports of the vaccine being possibly linked to rare blood clotting — which has caused some countries to limit its use in younger people. The two-dose vaccine has not yet been approved for use in the United States but has received authorization from more than 170 countries.

The study found that rates of the rare clotting disorder, known as thrombosis with thrombocytopenia syndrome (TTS), after the first dose were about 8.1 per million vaccines. The rates following a second dose were 2.3 per million, "comparable to the background rate observed in an unvaccinated population," the drugmaker said in a news release.

"Vaxzevria is effective against all severities of COVID-19 and it plays a critical role in combatting the pandemic," Sir Mene Pangalos, executive vice president of BioPharmaceuticals R&D, said in a statement. "Unless TTS was identified after the first dose, these results support the administration of the two-dose schedule of Vaxzevria, as indicated, to help provide protection against COVID-19 including against rising variants of concern." 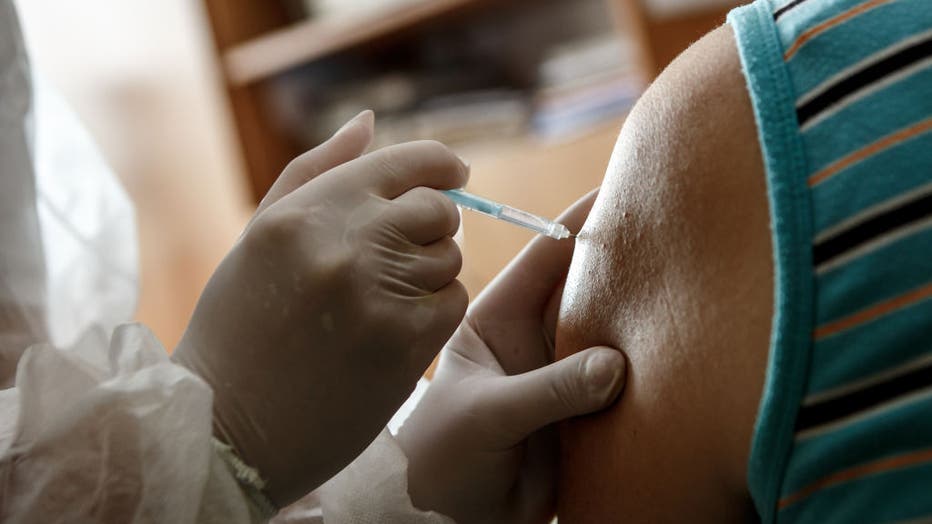 FILE - A teacher gets a shot of the AstraZeneca vaccine against COVID-19 on Aug. 4, 2021, on the premises of the Leader Lyceum at the secondary school N20, Uzhhorod, western Ukraine. (Photo credit: Serhii Hudak/ Ukrinform/Barcroft Media via Getty Ima

Last week, the Anglo-Swedish drugmaker also announced that it intends to seek U.S. approval for its vaccine later in 2021, a timetable that has slipped in recent months. When AstraZeneca released data from its U.S. vaccine trial on March 22, company officials said they expected to seek FDA authorization in April.

But the company said on July 29 that its application was delayed because it has decided to ask the U.S. Food and Drug Administration for full regulatory approval, rather than the fast-track emergency use authorization originally anticipated. As part of this "biologics license application," the FDA has requested extensive data from clinical trials around the world, as well as data on real-world use of the vaccine.

"We have an enormous amount of data, clinical data and all of the data coming from the work we’ve done around the world,″ AstraZeneca CEO Pascal Soriot said on a conference call with reporters. "A BLA is a much bigger submission than the emergency use approval."

President Joe Biden urged Americans to get vaccinated as the COVID-19 delta variant continues to cause a surge in cases.

AstraZeneca, which has already delivered more than 1 billion doses to other countries, has promoted its relatively cheap, easy-to-handle shot as a "vaccine for the world." The company, which has promised to deliver the vaccine on a nonprofit basis throughout the pandemic, says it provided about 90% of the doses distributed by the COVAX facility for low- and middle-income countries in the first half of the year.

Data published last month in the New England Journal of Medicine found that two doses of AstraZeneca's COVID-19 vaccine were 67% effective at preventing symptomatic disease caused by the delta variant, now the dominant U.S. strain, and 74.5% effective against the alpha variant.