Armed thieves steal $50,000 worth of merchandise from Houston business, the second incident in a month

Owners of ProOptix tell FOX 26 about the recent burglary and armed robbery at their store, where armed gunmen were caught on camera stealing $50,000 worth of merchandise.

HOUSTON - One Houston optometry business is filing the second police report in a month after thieves steal $50,000 worth of merchandise Friday.

Dr. Sana Malik says around 2 pm, an unknown man walks into her ProOptix store in the Tanglewood Court shopping area and asked to see Gucci frames.

As the optician walked them to the section, cameras show the man revealing a gun and pointing it toward the back of the staff member, asking him to get down and behind the store counter.

Armed thieves caught on camera stealing $50,000 worth of merchandise from Houston optometry

Owners of ProOptix shared surveillance footage of the frightening moments when armed gunmen were stealing $50,000 worth of merchandise.

Seconds later, two more men walk in - one of them points a gun at a customer. The other begins to take glasses off the displays and place them in a black plastic bag. 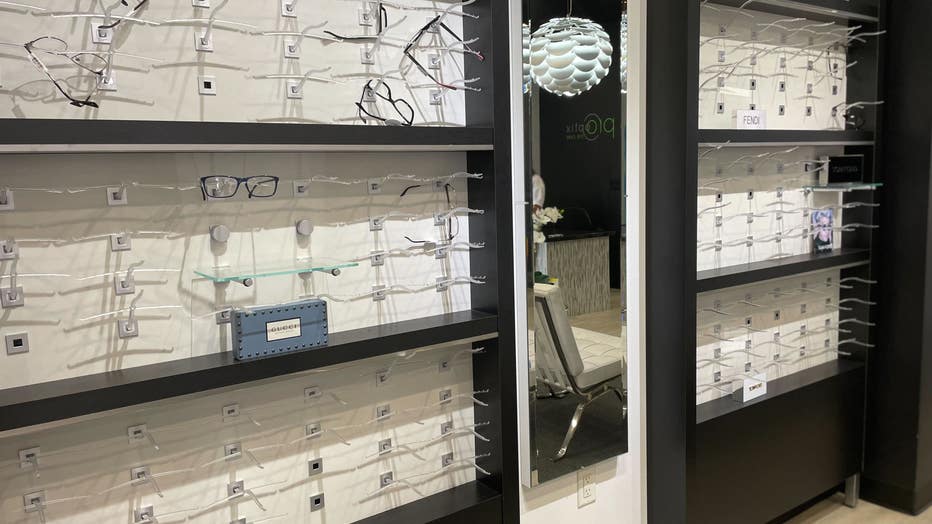 "It's extremely stressful," says Dr. Malik. "We're only 6 years in, and we have to deal with all this. We're in a pretty high-end area, and I just did not expect anything like that to ever happen."

Her sister and co-owner Dr. Sairah Malik spoke with FOX 26 in July after thieves broke into the same store and took over $30,000 in merchandise. She tells us the store will be closed over the Labor Day weekend.

The sisters also believe their stolen frames will eventually be sold online for a cheaper price - something happening to retailers across the U.S.

A recent National Retail Federation survey states that 54% of retailers have seen an increase in shoplifting in the last year, causing a huge loss in sales.

These two separate incidents will also change the way ProOptix will conduct business.

"We're planning to install a lock pad on the door to buzz people in and getting a panic button installed," says Dr. Malik. "That's all you can hope for is catching these guys and making sure they don't hurt anyone else, the business, or anyone in the process of whatever they're doing."

Houston Police Detectives stopped by ProOptix Saturday afternoon and tell the owners this investigation will be escalated because weapons were used in the incident.