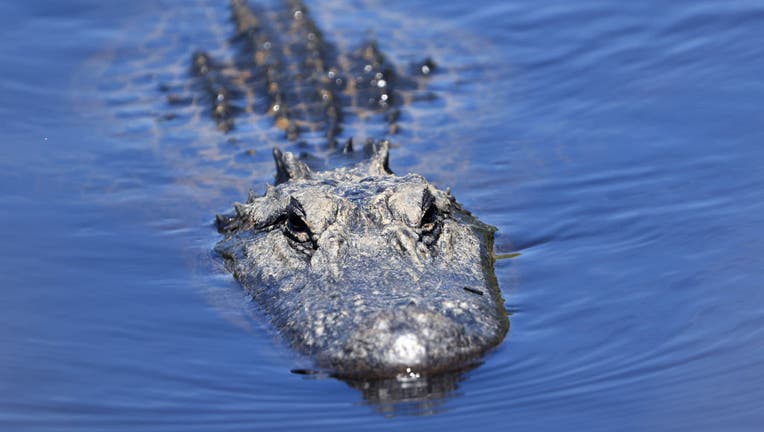 KIAWAH ISLAND, SOUTH CAROLINA - MAY 17: An alligator looks on during a practice round prior to the 2021 PGA Championship at Kiawah Island Resort's Ocean Course on May 17, 2021 in Kiawah Island, South Carolina. (Photo by Sam Greenwood/Getty Images)

An investigation is underway in a quiet gated community in South Carolina after an alligator attacked and killed an 88-year-old woman.

The Beaufort County Coroner's Office says it believes the victim, who was identified as Nancy Becker, slipped into a pond located in the Sun City development and was attacked by the alligator earlier this week.

The Sheriff's Office said the alligator and Becker were still in the pond when emergency crews arrived at the scene.

The South Carolina Department of Natural Resources is now investigating the alligator attack as it handles matters regarding wildlife.

Several people have been attacked and killed by alligators in the Southeast over the past several months.

In Myrtle Beach, South Carolina, an 11-foot alligator attacked a man standing near a pond and pulled him into the water in June.

Another attack occurred in Florida.

Officials in Englewood, Florida, said a woman was killed after she was attacked by two alligators at a pond near her home in July.

‘SHE WAS SCREAMING’: 911 CALL REVEALS GOLFER'S DESPERATION TO SAVE WOMAN FROM DEADLY FLORIDA ALLIGATOR ATTACK

FOX News correspondent Phil Keating reports there are millions of alligators in the United States, from Texas to the Carolinas.

Florida has an estimated alligator population of about 1.3 million and has a yearly average of seven unprovoked attacks that require medical attention, Keating reported.

Louisiana has an estimated 2 million alligators.

People living in or visiting areas where alligators are known to be living should be cautious when walking and should keep a close eye on pets and children.

LINK: Read more of this story on FOX Weather.