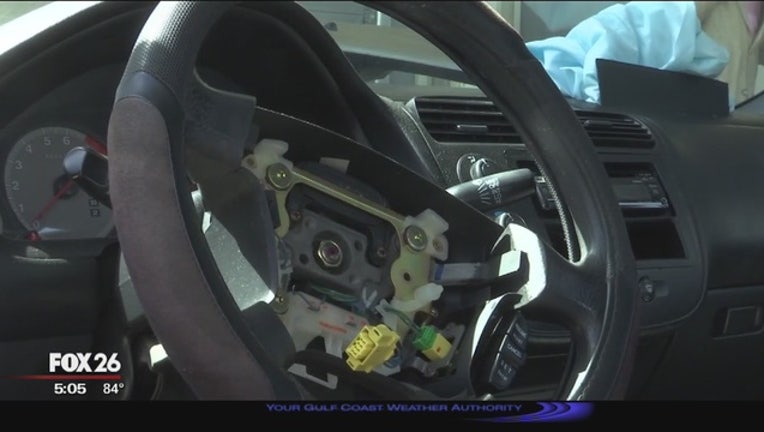 DETROIT (AP) — About 85 million Takata air bag inflators that haven't been recalled are inside cars and trucks now being driven in the U.S. and would have to be replaced if the company can't prove they are safe, the government said Wednesday.

The number would be in addition to the 28.8 million inflators already slated for replacement in what has become the largest automotive recall in the nation's history. If all the inflators are recalled, they would total almost 114 million. A recall that massive would take years to complete and cost Takata billions of dollars.

Unlike most air bag makers, Takata's inflators use the chemical ammonium nitrate to create a small explosion that fills air bags in a crash. But the chemical can burn too fast and explode with too much force, blowing apart a metal canister and hurling shrapnel at drivers and passengers. At least 11 people have died worldwide and over 100 have been hurt.

The National Highway Traffic Safety Administration, which made the estimate, says it doesn't know how many vehicles have Takata air bags, but said many have more than one inflator made by the company.

The new number shows how much worse the Takata problem could become, said Sen. Bill Nelson, D-Florida, who has urged NHTSA to recall all Takata inflators and make the company stop selling those with ammonium nitrate. "It underscores the need for regulators to provide the public with better answers when it comes to every Takata airbag on the road," Nelson said in a statement.

Under the terms of an agreement reached with Takata last year, the Japanese parts supplier must prove to the agency that the unrecalled inflators are safe to use, or they must be recalled. The agency has said that it expects the number of Takata recalls to increase.

The problem has been linked to older cars with long-term exposure to high humidity. That's why replacement parts are being targeted to areas such as the U.S. Gulf Coast, although many of the cars have been recalled nationwide. No one knows for certain how long it takes for the ammonium nitrate to deteriorate or whether inflators in older cars in cooler, less-humid states might explode in the future. That makes the safety of Takata inflators — which are in driver, passenger and side air bags — a potentially deadly unknown.

Mark Rosekind, who heads NHTSA, said in a February letter to Nelson that an immediate total recall of Takata air bags wouldn't provide significant safety benefits and could exceed the government's legal authority. It also would strain the network for replacement parts and increase uncertainty for consumers, he wrote.

Nelson wants all the inflators recalled, fearing further deaths and injuries. His request was made after a South Carolina man was killed by a Takata driver's inflator last year. The driver's inflator in the man's Ford Ranger pickup had not been recalled, and previous tests had shown no problems that type of inflator.

The agency says it must have data to support further recalls, which currently it does not have.

"We've recalled the highest risk (inflators) and we've now flipped the standard and are saying they must now be proven to be safe," agency spokesman Bryan Thomas said.

According to NHTSA, there are about 53 million Takata driver and passenger inflators in use that don't have the drying agent. About 32 million have the drying chemical. Thomas says no inflators have ruptured that contain the dessicant, either in tests or on the road, except for two side air bag ruptures in testing that were blamed on a separate manufacturing defect. The agency based its estimate on data provided by Takata and the 14 car and truck makers that have Takata inflators in their vehicles.

Takata has agreed not to sign any more contracts to sell ammonium nitrate inflators and phase it out of manufacturing by the end of 2018.

Earlier this year, scientists hired by 10 automakers blamed the trouble on a combination of volatile ammonium nitrate, heat and humidity, and inflator containers that may let moisture seep in.