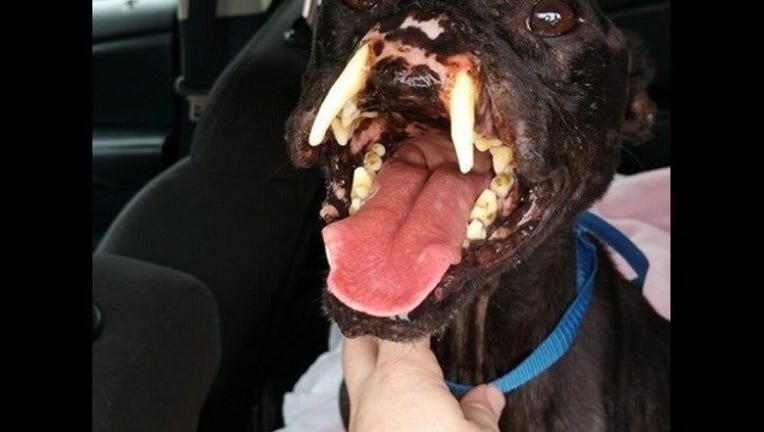 (WTXF) -- Khalessi the pit bull doesn’t look like other pit bulls which causes some to stare at her with varying emotions.

Her owner, Stephanie Paquin, prefers for people to just ask her outright why Khalessi looks so different.

"I would rather people ask what happened and give me the chance to explain," Paquin said to the Huffington Post.

The pooch doesn’t have a nose or sinus cavity and no nostrils. Instead, she has a smooth nub that stretches up her snout. As a result, her teeth stick out like long tusks.

Khalessi also suffers damage to the rest of her body. Her back legs do not function and her ribs poke out because she is underweight.

However, she does not suffer from heartworm, which Paquin says is a miracle.

It is believed that Khalessi didn’t suffer from an accident, but rather she was intentionally harmed, according to the Huffington Post. This is because her injuries – which include broken bones among the others – are at different stages of healing.

Paquin says that she will give anyone who asks a full explanation of Khalessi’s injuries, but she is unable to pinpoint when or why they happened. And whoever is able to shed some light on the situation is unknown.

Khalessi was found on a surprised neighbor’s lawn near Orlando, and was then taken to a shelter.

That’s when Paquin, who runs a nonprofit called Passion 4 Pits, came into the picture. A shelter employee asked her to take Khalessi from the shelter, to ensure that she would have a chance at a better life.

On Saturday, Khalessi went home with Paquin and her husband and the dog seems happier than ever.

"Khalessi is sweet, loving and amazing. She loves people, all people. She just wants attention and love," said Paquin.

But Khalessi still has a long way to go. She needs reconstructive surgery and other expensive, but necessary medical procedures.

And after that, she will be put up for adoption.

Now, Khalessi is just enjoying life in a safe and comfortable environment.

Activities she enjoys include sleeping in her dog bed and playing with Paquin’s other dogs. She also took a ride in a shopping cart in a store, and chose a toy.

And believe it or not, Paquin wants people to stop her and ask her Khalessi’s story.

She wants to tell the world about how evil humans can be toward animals and how the animals can then turn around and be so forgiving.

"A person did this to her and she does not let it affect her outlook on people," Paquin said. "This experience has changed her appearance but not her heart."