Nash Johnson applied to be a dishwasher at Drake's in Kentucky, (Credit: Drake's)

LEXINGTON, Ky. - At only 8 years old, Nash Johnson knows the value of hard work and its rewards.

This is why he had no problem applying for a job as a dishwasher at Drake’s restaurant, which recently opened up a new location in Lexington, Kentucky.

All because he wanted to buy an Xbox.

"We received an interesting application while hiring for the newest Drake's location.," the restaurant posted on its Facebook page. "Nash stated he was looking for his first job so he could save up money for an Xbox." 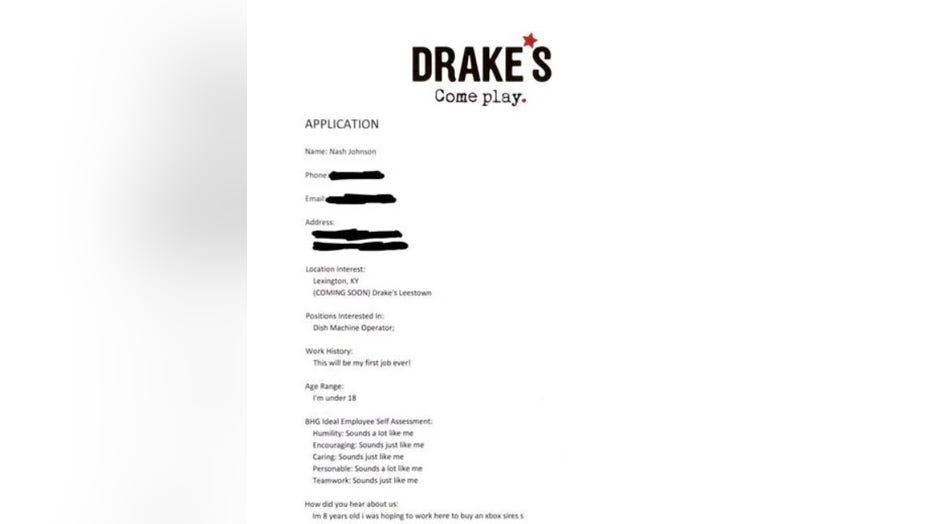 The elementary school student even submitted his resume online. On his resume, he noted that he met the company’s ideal characteristics including having humility and being encouraging, caring, personable, and showing teamwork.

"I am 8 years old. I was hoping to work here to buy an Xbox," Nash added in the comments section.

Unfortunately, Nash didn’t get the job because he was underage.

"We gave the number on the application a call, and it turns out Nash isn't quite old enough to work at Drake's yet," the company added on Facebook.

However, Nash didn’t leave empty-handed. He was invited to meet company leaders at the restaurant — and was surprised with an Xbox.

"Thank you for applying for a job, and always remember, you’re part of this family," Chief Operating Officer Mark Thornburg told Nash in a video posted to Facebook.

"That kid is not afraid to fail," Nash's mother, Belinda Johnson, told WLEX. "He is a go-getter."

The mother also told the outlet that her son has been taught how to save, give and spend money.

Though Nash has the Xbox, he remains eager to work.