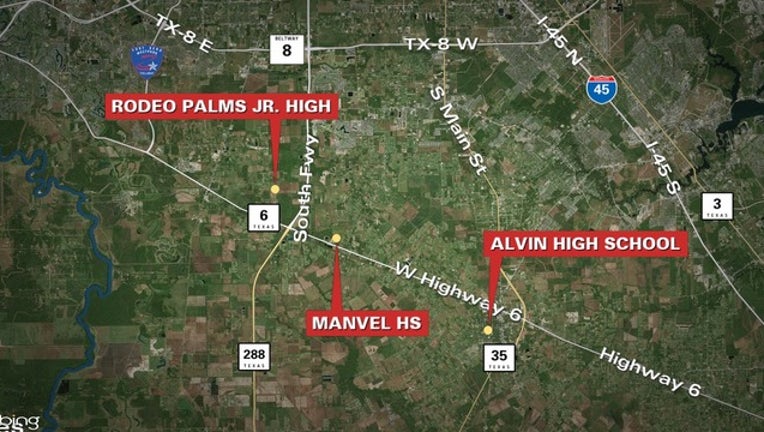 According to a notice sent by the district to parents, a student at both Alvin High School and Manvel High School made threatening statements to their classmates and those students have been removed from their campuses and face school and legal consequences.

The district says two students at Rodeo Palms Jr. High were also removed from campus and face legal consequences after Alvin ISD PD investigated a social media post and an inappropriate statement made by the students.

Alvin ISD asks that parents speak with their children about the consequences of making inappropriate statements in a school environment.

Alvin ISD makes the commitment to keep parents informed of matters of safety and security regarding their child’s campus.  Today, we again ask for your partnership in speaking with your children about the consequences of making inappropriate or concerning statements in the school environment.  It is critical that our students understand that, regardless of their intent, these matters will not be responded to lightly.

School Districts around the Houston area, and those nationally, are continuing to respond to inappropriate student statements.  Much like parents and the broader community, students are concerned, and in many ways inundated with social media, news reports and conversations with their peers following the terrible tragedy in Florida.  Students respond to their concerns in various ways and our team is working to provide support and assistance to those experiencing anxiety.  In other instances, students may respond impulsively by making inappropriate comments, often to their friends and classmates.

As shared in previous messages, Alvin ISD will respond swiftly and exhaustively any time we receive information of a concerning nature.  The District is deeply committed to the safety of our students and campuses.  For that reason, our response to these matters will also involve a response from law enforcement.

We share these details not to heighten your level of concern. We hope that you identify that these matters will be addressed quickly and appropriately.  Alvin ISD will remain firm in our commitment to safety and security.  We also remain committed to keeping you informed of matters occurring at your child’s campus.  We continue to ask that you share any information that you believe to be concerning with campus or district administration or by contacting the Alvin ISD Police Department.