2 years later, what happened at Parkland?

Two years ago, 19-year-old Nikolas Cruz, a former student at Marjory Stoneman Douglas High School in Parkland, Fla. entered his old school armed with a semiautomatic AR-15 rifle and opened fire at students and teachers who were preparing to go home for the day, authorities said.

The methodical shooting resulted in 17 deaths and more than a dozen injuries.

Cruz faces 17 counts of premeditated murder. Police said he confessed, but pleaded not guilty in the shooting. His lawyers have made it clear that he would be willing to plead guilty to avoid the death penalty.

The Sun-Sentinel of South Florida reported extensively on the shooting and said Cruz, while a student, was searched by school guards daily for weapons, and was voted "most likely to shoot up the school" by the guards. 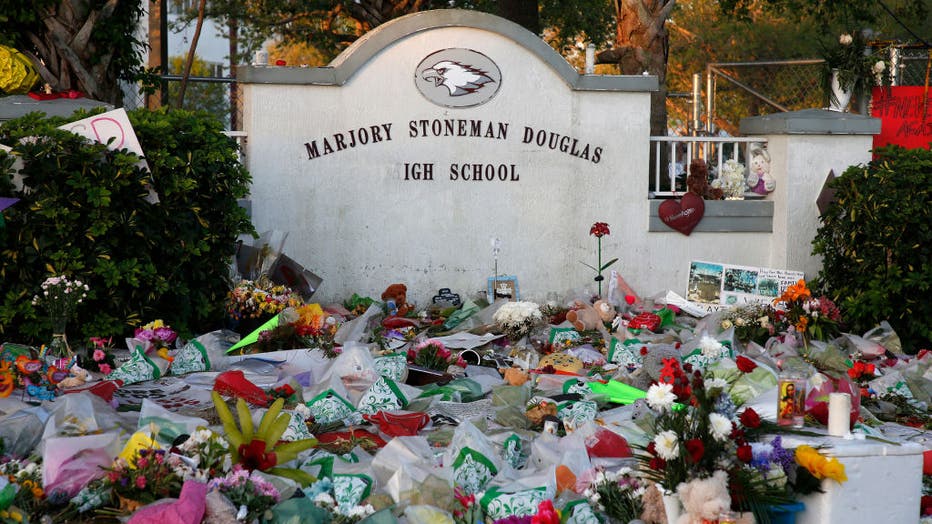 Flowers, candles and mementos sit outside one of the makeshift memorials at Marjory Stoneman Douglas High School in Parkland, Florida on February 27, 2018. (RHONA WISE/AFP via Getty Images)

Kelvin Greenleaf, a school security guard reportedly said during a sworn deposition that the school learned that Cruz drank bleach and "tried to hurt himself or something like that."

Florida announced early this year that it will be the first state in the country to implement a statewide plan for identifying potential mass shooters before they act. Individuals planning a mass shooting often show signs of their intentions, whether in statements to friends or social media posts.

Cruz's trial has been delayed until the summer so his defense attorneys can prepare for the case.

The massacre on Valentine’s Day 2018 lasted five minutes and 32 seconds. Cruz was dropped off by an Uber driver at around 2:19 p.m., police said. The driver told a CBS affiliate that she noticed him carrying a large black bag. Cruz said it was for music class. She called the ride uneventful.

Since the ending of the school day was near, the front gates were wide open for cars and school buses. That's when police say Cruz walked in, dressed in a school shirt and lugging the backpack with additional loaded magazines, a gas mask and smoke grenades.

Andrew Medina, a security guard who was also the school's baseball coach, spotted Cruz and remembered him as the "crazy boy," the Sun-Sentinel reported. Medina is being sued by Andrew Pollack, father of one of the victims, for negligence.

Cruz eventually entered the school and bumped into a freshman near a second-floor restroom while loading his rifle, police said. Cruz allegedly told the student that he better leave because "things are going to start getting messy.“

The freshman alerted a staffer who was accused of not implementing the correct protocol in such an event. In total, three school employees failed to properly alert the school about a gunman on campus, the Sun-Sentinel reported.

Cruz then activated a fire alarm -- and while students were leaving their classrooms he allegedly opened fire. USA Today, in a minute-by-minute summary, identified the weapon as a .223 caliber AK-15 semiautomatic rifle. The first students killed were Martin Duque, Luke Hoyer and Gina Montalto, the paper reported. The suspect continued on and killed six more students inside classrooms.

Chris Brent Hixon, 49, the school's athletic director and U.S. Navy veteran, tried to engage the shooter but was hit with a round, the paper reported. He took cover, but Cruz located him and fired again. Hixon was later buried with full military honors, according to Tampa's FOX 13.

Aaron Feis, an offensive line coach for the school’s football team, was the first victim identified. The school's football team tweeted Feis "shielded students from the shooter" when he was struck with a bullet.

"He was our Assistant Football Coach and security guard. He selflessly shielded students from the shooter when he was shot. He died a hero and he will forever be in our hearts and memories," the tweet said.

Meanwhile, the scene at the school was chaotic and many teachers and students had no idea what was unfolding around them. A 17-year-old student told the Associated Press that a fire alarm rang out for a second time and students were calmly filing out in the hallways.

"Everyone was kind of just standing there calm, and then we saw a bunch of teachers running down the stairway, and then everybody shifted and broke into a sprint," she said. "I hopped a fence.“

Despite the acts of heroism from some of the staffers, some of the public's outrage was assigned to the response by the Broward County Sheriff deputies.

Scot Peterson, a former deputy who was on duty at the school at the time of the shooting, was seen on surveillance video rushing with two staff members toward the building where the shooting happened. When they arrived, he pulled his weapon but then retreated and took up a position outside, where he stood with his gun drawn.

Peterson was arrested in 2019 on 11 criminal charges related to his alleged inaction during the massacre. He was charged with child neglect, culpable negligence and perjury — allegations that carry a maximum prison sentence of nearly 100 years.
Joseph DiRuzzo III, his lawyer, said in a statement last summer that Peterson is merely a scapegoat. He called the charges "a thinly veiled attempt at politically motivated retribution." The Sun-Sentinel reported that four deputies arrived at the scene but did not immediately engage the gunman.

Deputies Edward Eason and Josh Stambaugh were terminated following an internal affairs investigation. Two other officers, Peterson and Sgt. Brian Miller were fired last year. Scott Israel, the sheriff at the time, was removed from office by Florida Gov. Ron DeSantis for similar reasons and the state Senate upheld the decision. Israel called the decision political. 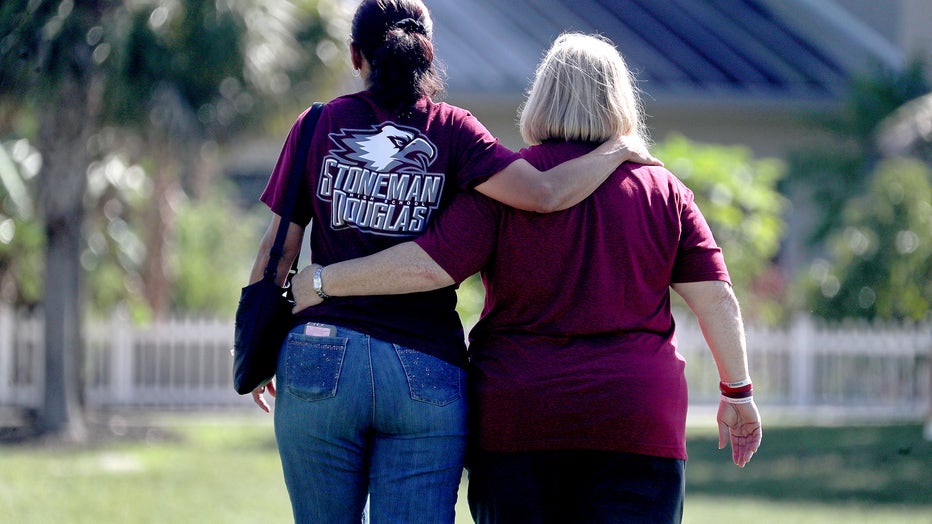 Stambaugh failed to run toward gunshots on multiple occasions to stop the shooter, according to the report. "Stambaugh appeared to take cover over assisting deputies entering a possible hot zone," it said based on videos from his body camera. At one point, Stambaugh told an officer from the Coral Springs Police Department nearing MSD's building 12 -- where the shots were being fired -- to "watch yourself" as he remained behind cover.

Cruz stalked more classrooms and fired more than 100 rounds. The Sun-Sentinel reported that it took five minutes and 32 seconds from the first shot.

Just before 2:30 p.m., multiple 911 calls reporting a shooting came in and authorities were dispatched to the high school, according to Cruz's probable cause affidavit. The suspect's description was blasted over police radios.

"As a result of the chaos, multiple persons were fleeing the school," the affidavit said. "After the shooting, the shooter blended in with fleeing students and was able to elude arriving officers.“

Cruz was soon taken into custody without a fight.

The massacre at Marjory Stoneman Douglas High School forced the country to come to terms with gun violence at schools. Some students at the school, like David Hogg, became political activists and challenged the status quo on gun laws.

Former President Obama wrote a column for Time magazine and called the students inspirations for change.

"Seared by memories of seeing their friends murdered at a place they believed to be safe, these young leaders don't intimidate easily," he wrote.

Parents of some of the victims at the school have also pressed for accountability ranging from stricter gun laws, more effective police responses and schools designed with safe spaces for students in the event of a shooting. The Sun-Sentinel report said some students in the school were trapped in a hallway because the restrooms were locked due to a vaping trend on campus. 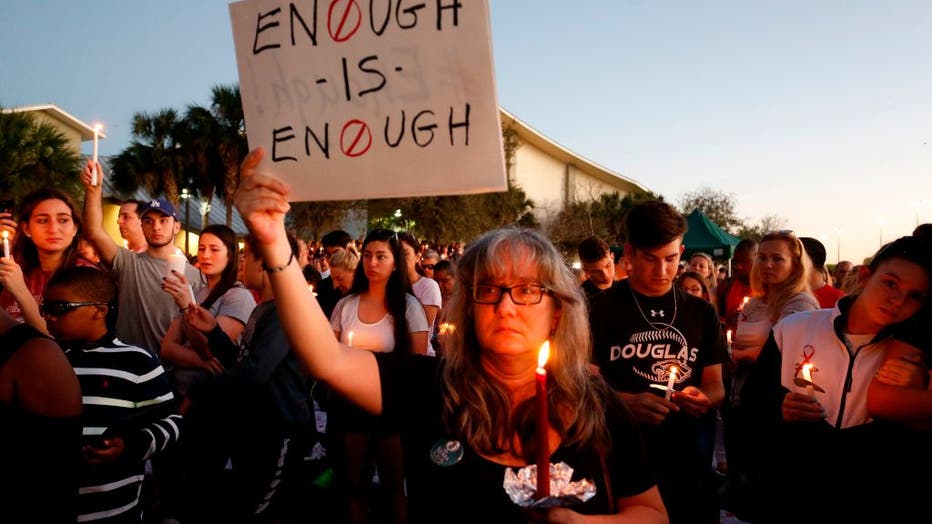 Many of these parents are resigned to know that their lives were forever changed and the emotions are still raw.

Fred Guttenberg, whose 14-year-old daughter Jaime died in the shooting, was removed from President Trump’s State of the Union address earlier this month after he shouted about gun control when the president vowed to protect Second Amendment rights.

"Tonight was a rough night," he tweeted. "I disrupted the State of the Union and was detained because I let my emotions get the best of me. I simply want to be able to deal with the reality of gun violence and not have to listen to the lies about the 2A as happened tonight.

"That said, I should not have yelled out. I am thankful for the overwhelming support that I am receiving. However, I do owe my family and friends an apology. I have tried to conduct myself with dignity throughout this process and I will do better as I pursue gun safety.“

Get updates on this story at foxnews.com.