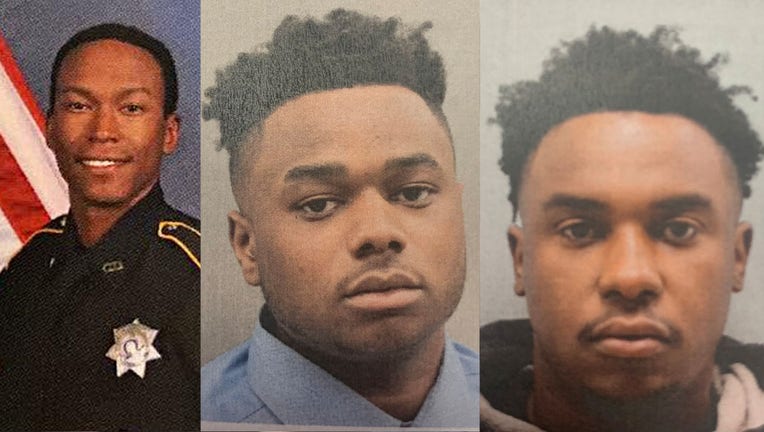 HOUSTON - Two people have been arrested in connection with the death of a Harris County Pct. 3 Constable deputy.

Both men are linked to the death of Constable Deputy Omar Ursin, who was laid to rest Thursday. The shooting was reported around 6:30 p.m. on Aug. 28 in the 11900 block of Madera Run Parkway.

Deputies with the Precinct 4 Constable’s Office initially responded to the scene and found a small car had crashed into a tree in the median of the road. The driver, Dep. Ursin, had been shot at least once.

He was taken to a hospital where he was pronounced dead, authorities say.

The Harris County Sheriff’s Office Homicide Division and Crime Scene Unit responded to the scene to conduct the investigation.

According to the sheriff’s office, witnesses saw a dark-color, newer-model, 4-door car with tinted windows driving next to Dep. Ursin’s vehicle as they both went eastbound on Madera Run Parkway.

Authorities say someone in the suspect’s vehicle shot into Deputy Ursin’s vehicle and then fled northbound on Olympic National Drive. Currently, it's believed the motive behind the shooting stemmed from road rage.

At last check, both men were also previously out on bond.